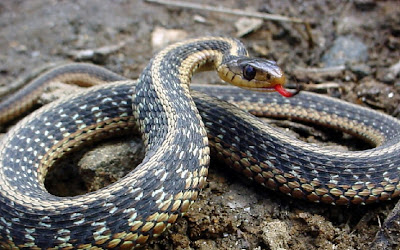 I am going to talk about snakes.

If you share the sentiments of Emily Dickinson when she said, “ But never met this Fellow/ Attended or alone/ Without a tighter breathing/ And Zero at the bone”, you had better leave the room or if you are reading this, you may want to crumple up the paper and be on your way.

Are you still there? All right, then.

I want to make it clear that I am not in love with snakes. My encounters with these reptiles, however, do not give me a feeling of horror, but rather a delicious fear and a kind of fascination.

Even an encounter with a poem about snakes raises goose bumps on my arms and a shiver down my back. Karen Connelly, in her “The Lesser Amazon” thrills me with this excerpt:

I found a nest of baby snakes beneath
the bathmat, living red leather,
tongues flicking an ancient orange.
They covered my feet in an exotic reptile weave,
wound up my shins and looped themselves
around my waist and neck and slid anxiously
through my slick hair.
It took me an hour to comb them out
and send them slithering to the garden.

At the risk of dating myself, I will tell you this. The boys at the one-room school I attended as a child used to catch garter snakes by their tails and chase the girls with them at recess. We all screamed mightily and ran as fast as we could. I guess I didn’t run quite fast enough once and got a little snake down the back of my dress. It slithered out readily but I have never forgotten the feel of it. It was very weird.

When I was training to be an elementary schoolteacher, the master in charge of science informed us that we needed to be acquainted with snakes so that if a student brought one in for “show and tell” we wouldn’t have hysterics. One day he brought a live garter snake to class and made us touch it. We discovered its scales were very dry, not slimy as we expected. It flicked its tongue out at us, but we were assured that this particular species was perfectly harmless. I thought I had it made after that experience and would never be afraid of snakes again.

I discovered I hadn’t quite reached that blase dimension when after two years of freedom from wildlife in my classroom, it happened. A freckle-faced youngster brought a small garter snake in a big pickle jar for the edification of his peers one Thursday. Bravely, I reached in and stroked its green and yellow striped sides. I had the boy pass the jar around so every pupil could do the same. Oh, I felt proud of myself.

At the end of the day, I suggested that it be taken home and the seven-year-old procurer of snakes set the jar on the back counter while he got ready to catch the bus. After all the children had lined up and left, the jar with its occupant was still there! It had been forgotten in the rush.

I checked that the airholes were still open, gathered up my marking for the evening and left. Surely, the boy would take his snake home the next afternoon. I would put the jar into his hands myself.

On Friday morning, I was in my classroom early. The jar was empty. The snake had escaped. The classroom door was locked. I had locked it myself when I left the night before, so the snake had to be somewhere in the room. I checked all the obvious places, like the waste basket, leftover sneakers i2n the cloakroom, and under my desk. No snake. Then, I started on the pupils’ desks. I felt inside each desk among all the paraphernalia that grade ones collect. It was impossible to just look in desks because they were too close to the floor. I hoped I wouldn’t feel the cold dry scales of a coiled-up reptile and I didn’t. It was a mystery where that snake had got to until I remembered the art cupboard at the back of the room. It had open shelves for all kinds of paper.

And, of course, there it was, in the corner of one of shelves, coiled up on a pile of red construction paper! Courageously, I reached it and it wound itself around my wrist. Heart pounding, I carried it to the empty jar and gently eased it off my arm into it. I avoided looking at its beady eyes and flicking tongue. The top was screwed back on with alacrity.

With a satisfied sigh, I continued preparing the lessons for the day albeit with shaking hands.

Now, that wasn’t too bad, was it? Oh, you say that even so, you wouldn’t want to comb baby snakes out of your hair! Neither would I, that’s just waaaaay too creepy!

Eunice Perneel Cooke is a retired teacher-librarian and is the author of "Foxfire," "Summer Cousins" and "Serendipity." These are books for children in the seven to ten year-old range. She has just finished "A Very Mousey Tale" which is a picture book for five to eight year-olds. She illustrates her books with line drawings and has tried a photo and text arrangement for "A Very Mousey Tale."

Eunice had a small book signing at Good Books last spring, and has sold several copies through her website and by word of mouth. She has had a story published in Canadian Stories and two pieces in Halton Herald.  She has taken two courses is creative writing with Brian Henry and credits his lessons for whatever success she has had.

Note: For information about Brian Henry's writing workshops and creative writing courses, see here.
Posted by Brian Henry at 9:14 AM