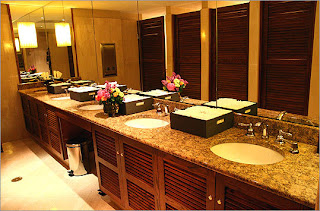 The main differences between men and women are not always those of appearance. On a recent visit to a crowded public washroom I was reminded of how washrooms or rather, the way the sexes use the washrooms, points out those differences rather sharply. For men, the washroom is a place of utility; they walk in unzipping, do the job and walk out rezipping. Hand washing is optional.

Women, on the other hand, rarely arrive alone. They are often accompanied by a friend, or two, a child or two and or armloads of baggage. They walk in sometimes tentatively, inspecting a cubicle before using it or sometimes not using it at all. They check themselves in the mirror, haul out the war paint and do a makeover, redo their hair, change or re arrange their clothing, change diapers etc. In short, they set up shop. They camp!

How do I as a female, know what goes on inside a men’s washroom? I’ll tell you how. I’ve been there! No, I’m not a transvestite but for many years I was privy (no pun intended) to the goings on inside many a facility. I was a janitor, a janitorial supervisor, and a janitorial contractor. I cleaned toilets. They were all kinds sizes and conditions of toilets from schools, airports, office buildings, car dealerships, department stores, campgrounds and restaurants. I’ve seen them all! Oh, the things I’ve seen!

In spite of a rather conspicuous “closed for cleaning” sign that I usually employed, I would often be interrupted by a person or persons who either couldn’t read or just “had to go”.

Early in my career, at a Kmart, I apprehended a shoplifter stuffing her old clothes into the garbage can after changing into a new outfit that she had just lifted from the racks. How she got past the eagle eyed “buzzer lady” remains a mystery. On another occasion, a smartly dressed upper manager peed all over his highly polished shoes when I stepped out from the cubicle I had been cleaning catching him by surprise.

Washrooms can be very revealing of character. I’ve overheard devious plots ranging all the way from the wrecking of a marriage to the sabotage of business and overthrow of companies to mundane mutterings of what to have for dinner tonight. I’ve polished gold plated fittings in executive powder rooms on Bay Street and literally shovelled red mud from the toilet floor at a farm equipment dealership in PEI.

I’ve seen all sizes, shapes, and ages in all stages of life and states of mind. I have been variously horrified, humbled, and at times judgemental. I once helped police apprehend a local street nuisance when he had eluded the male constables by crouching on top of a toilet inside the ladies washroom.

Another time, I called an ambulance when a rather large gentleman collapsed of a heart attack inside a cubicle. They had to remove the door to get him out. I’ve led a group of terrified female government employees out of the darkness during a power failure. They were inside the windowless washroom when the lights went out.

After a career that has spanned some twenty five years, I can confidently state that be you a doctor, lawyer, native chief, a captain of industry or the queen of the garbage room, when you’re sitting on the toilet and the roll is empty, you’re all in the poop! 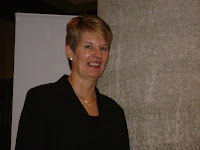 Susan MacDonald is a transplanted Prince Edward Islander who now lives in Brampton with her husband and their cat. Susan’s stories reflect aspects of daily life now as well as memoirs and short stories based on tales heard during her childhood on the farm. Her works have been published in a two anthologies as well as receiving an honourable mention in an online contest in the UK. She is a member of the Brampton Writers Workshop as well as a group that meets in Oakville.