The Scruncher, a true story of organizational change by Alf Rock 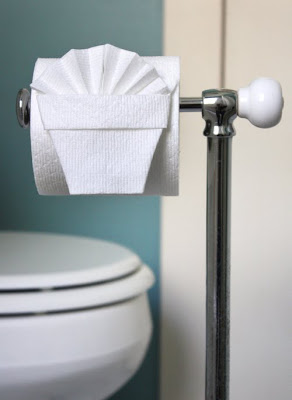 When she was 12, I said to my daughter, “You know, you're so much more advanced than I was at your age.”

“What are you talking about?” she replied scrunching her face. “I’m more advanced than you are now!”

We laughed and within a few months she demonstrated that reality with this tale of transformation.

At that time my youngest son was at the threshold of attending school, but was still at the stage of his development where he was announcing his bodily functions.

“Dad, I need to go for a pooh,” he would announce prior to every visit to the toilet. This made perfect sense, since he needed to secure someone to perform the administrative “paper work” once he had finished his business. When he was ready for this, his ritual would be to announce, “Dad I need your help.”

We had however come to a point in his life were I was going to have to sunset this outsourced function of my son’s ablutions, so I could retire from being a Chief Wiper.

A change intervention was needed and it would have to be handled delicately.

The first phase of the plan was to begin to introduce a level of dissonance and discomfort within the status quo of our dependant relationship. With a clear need for change, one has to stimulate the movement towards the change and gently reduce the resources supporting the old ways.

So when he next announced, “Dad I need to go for a pooh,” I replied with a change to the ritual.

“Unless you want to upset your mother, I would recommend that room right there,” pointing to the washroom.

He found this more amusing than the following change to the ritual, which was to leave him feeling isolated and marooned on his porcelain island throne when he announced, “Dad I need your help.”

To this I stopped responding in my normal way and let him call it out at least a second time. I tip-toed up to the door of the washroom and timed my response with his latest foghorn blast for help, whereupon I popped my head around the door and delivered the next ritualized line.

“If ever a sentence deserved a please on the end of it – it would be that one!” I emphasized with a pointing finger. Then I held out for him to make the request with the proper protocol.

“It would be my pleasure,” I responded and performed my C-Level duties of Chief Wiping Officer.

After a few weeks of this, I felt it time to put the second phase of the plan into effect. Our dependant relationship had shifted to the point that if he had hired me for the job of C.W.O, he would have surely fired me by now. The environment was primed for him accepting change.

The next phase required some finesse, since having a need and target of change was only half the story. What was needed next at this critical juncture was an extraordinary change agent. I resolved to use the old corridor-ambush technique to recruit my change agent.

Between the kitchen and laundry room I bumped into my daughter. “So I was thinking,” I said casually.“Your brother will be spending all day at school, and I would hate to think that some mishap would befall him because he hasn’t learnt to wipe his ass yet.”

“What’s that got to do with me?” she responded with immediate suspicion.

Dealing with extraordinary people was a tricky proposition, especially when I was so obviously transparent in my entrapment technique.

“Well I was thinking,” I continued still ever so casually, “someone’s going to have to teach him to wipe his own ass”

“What’s that got to do with me?” she repeated, maintaining her defensive posture.

“Well, you know, sometimes, it’s harder to get someone to do something, than to do it yourself,” I maneuvered.

“I’m not wiping his ass!” she declared.

“Exactly,” I pounced. “If I try to instruct him in those finer points, I will simply end up doing it myself. You on the other hand would never be tempted to do anything other than train him in the proper way. And,” I added moving to close the agreement, “the experience will be much less traumatic for him, since your people skills are so much better than mine.”

“Okay,” she conceded. She turned and walked away into the mission, from which I heard nothing more.

The ritual of declaring of bodily functions and requesting help abruptly stopped. I felt smug at having crafted a masterful change plan.

That was the end of it, so I thought, until a few weeks later, in a ritual of parental anxiety I found myself shouting for the kids to: “Get in the car! We’re going to be late! Where’s your brother?” I asked my daughter.

“I’m in the toilet” he shouted at the top of his voice.

I rushed down the corridor to the washroom and swung the door open with no regard to privacy.

He looked up at me.

“Are you done?” I said, and then proceeded to swipe some toilet paper, prepared to regress out of my retirement.

Suddenly pandemonium ensued. Screams of protestations had me step back, and then my daughter hit me with a profound line that became part of our family sub-culture.

“Oh my God Dad, you don’t even know what a Scruntcher is!”

“Didn’t you ask me to teach him how to wipe his ass?” She was furious with me.

“So I told him that I was going to do that, and made sure that he was cool with it. Then I told that the first thing that he had to do was to make a decision of whether he wanted to be a Folder or a Scruncher.”

I turned and looked at my right hand holding the folded paper tissues, and then looked down at my son.

It turns out that my children where way more advanced than me after all. When I had grown up, folding was the only option. Suddenly realizing that my kids had freedoms beyond the conventions of my upbringing was a pure delight.

“Peace,” I said, scrunching up the tissues in my hand and surrendering them over to my son.

I retreated and allowed order to prevail. And suddenly being late wasn’t the end of the world.

Alf Rock is a man of many talents and highly trained in the art of organizational change. This piece was originally writtten for one of Brian Henry's "Welcome to Creative Writing" classes.

For information about Brian's writing workshops and creative writing courses, see here.
Posted by Brian Henry at 9:14 AM