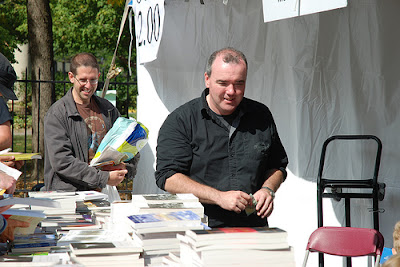 Insomniac was founded in 1992 as a small press that published poetry chapbooks. It is now a medium-size independent press that publishes eye-catching non-fiction titles as well as the great fiction and poetry. Insomniac's books are sold in 40 countries around the world. Some things remain the same: Insomniac always strives to publish the most exciting new writers it can find. Celebrated authors like Natalee Caple, Lynn Crosbie, Stephen Finucan and A.F. Moritz either got their start at Insomniac, or have published important books with us.

The common denominator in Insomniac's publishing program is its willingness and ability to venture in new directions, both editorially, and in the areas of promotion, marketing and publicity, all the while maintaining the highest standards in all that it undertakes.
Insomniac accepts unsolicited submissions and eventuallys get around to reading all of them but that can take six months or more.

Hre are a few tips for catching our attention:

1. Know what we don't publish. Right now this includes science fiction, cookbooks, romance, and children's books. Our poetry list is also full for the foreseeable future because we are booked up for the next several years.

2. Query first. Sending us a short letter or e-mail describing your book, rather than a complete manuscript, will save everyone involved a lot of time. If we're not interested, we can tell you so immediately, and if we are interested, your manuscript will go to the top of the pile when it comes in. It's that simple.

3. Get published somewhere else. We love new authors, but some sort of track record helps a lot. If you've finished a brilliant novel and have never been published anywhere else, keep your shirt on and start sending short stories or excerpts to literary magazines; most of them accept unpublished authors, and we'll look a lot more closely at authors who have been in print before. (If you have a truly stunning non-fiction proposal, however, you might be able to bypass this step.)

4. Write something good. It's harder than it sounds and, of course, impossible to define. We can tell you we're looking for compelling stories, beautiful writing, unique perspectives and fresh voices, but that probably doesn't help you much. Still, it's worth saying. Before you put your manuscript in an envelope, ask yourself if it really says something new (or something old in a new way). Be honest. Even an editor who loves your book will think parts of it need work—that's our job—so don't trust anyone who tells you your writing is beyond reproach.

5. Know what we do publish. We're now actively seeking commercial and creative non-fiction on a wide range of subjects such as business / personal finance; gay and lesbian studies; black canadian studies among others. Check out the books we've published in the past couple of seasons to get a feel for our tastes.

Mike O'Connor, publisher of Insomniac Press, will be one of three panelists at the "From the Horse's Mouth ~ strategies for getting published" forum hosted by Brian Henry at Ryerson University on May 7, 2011.  Lynn Henry, publishing director of Doubleday Canada, and new Canadian agent Marilyn Biderman will also be on the panel.  Details here.
Brian also has a "How to Get Published" workshop coming up Saturday, February 19, in Burlington, with literary agent Alisha Sevigny of the Rights Factory (see here).

For information about all of Brian's writing workshops and creative writing courses, see here.
Posted by Brian Henry at 8:04 PM