Excerpt from Nomad on the Run, a novel by Georges Benay

Paco gazed at the turn-of-the century building and struggled with his emotions. Soon he would lunge into action that, by some ironic twist, would change the lives of two men: a new beginning for him and a premature death for the foreigner.

His journey to Gibraltar had begun in a Spanish prison. There he had been introduced to the Brotherhood, more as a means of survival in a hostile environment than out of any true religious zeal. The voice of a shadowy bearded man came to him one day from the dark recesses of the cell opposite his own, and he had listened to that voice because of his passion for the history of his people.

The man had told him of the great injustice and humiliation his people had endured over the centuries because of their religious beliefs. He was reminded of the glorious past of his ancestors, who had conquered half of the infidel world. At first, all he had done was listen to the voice. Until one night, when he had dreamed he would one day bring fame and honor to his family. And so, he finally spoke back to the man with the grey beard, who told him to wait for the call that would come one day. From that day forward, his fate was sealed.

Paco had left Madrid two days ago in the middle of the afternoon with two trusted companions. They traveled through the night and most of the following day in his old Renault. They lived on bitter coffee and dried dates for almost two days to reach their rendezvous before nightfall in Gibraltar.

Standing under the canopy of a jewelry store, he surveyed his current surroundings, satisfied with his preparations. He'd set a safety perimeter around the hotel where they knew the stranger would soon check in. One man posted at each end of the street kept a watchful eye for unwanted onlookers. A distant cousin who cleaned rooms at the hotel would give them access to the garage in the basement. That same cousin had promised to leave the key to the stranger’s room in an envelope inside a hamper full of dirty linen in the basement laundry just inside the stairwell.

Paco knew the importance of this mission and hoped it would be the first of many to come. Many years ago, Paco had escaped his village in the High Atlas Mountains of Morocco where his family lived in a tighremt with thick walls. The old patriarchal house stood in the middle of a small plot of land surrounded by gaunt peaks and the sparse field of barley, maize, and potatoes that grew under even the most unforgiving conditions.

The middle child of a family of eight, he had decided at a young age to run away from the anonymous and poverty-stricken life of a shepherd that was predestined for a middle son by his father and the father of his father before him. He had arrived one bright afternoon in Casablanca looking for fortune and fame. There he met another young man, who told him that the West was where he would find the life he was looking for.

But he found none of these things in Madrid. A life of drudgery, menial and shameful jobs, and in the end, petty thefts were all he could hope for to survive in that strange city. Those thefts had led him down a lonely road that ended in imprisonment. And he had sworn to himself the day he had walked out that he would never see such a place again. From the depths of that dusty hell, grand dreams of heroism were born.

He was near his goal, Paco thought now, a bitter irony. What he could not find in a land across the sea, a foreigner on the very edge of his homeland was about to deliver to him. They had been promised a very generous reward to kidnap the foreigner and deliver him, dead or alive, to the stranger he knew only as a voice on the phone. But to Paco, the wealth mattered little. He would gladly have given his share to his two comrades. He had a greater purpose on his mind when he had decided to join the war against the West.

Paco felt his cell phone vibrate in his right pocket and flipped it open. He listened to the man’s voice on the phone reserved for incoming calls. The foreigner was on his way, he was told. He glanced at his companion beside him, who immediately understood the silent message and nodded. He had made it clear from the start: Speak only if danger arose.

They both watched the SUV emerge from the top of the hill, followed by a local police car. The two vehicles came to a stop a few yards away from their observation post and the foreigner walked into the hotel alone. Paco grinned, while his companion crushed his cigarette on the ground.

Their eyes focused on the third floor of the grey stone building. After several moments, a light flickered inside the room that had been reserved for the foreigner, and a mild trepidation filled their hearts. Paco left his vantage point and walked hurriedly up the street. In front of the hotel, he threw a quick glance at the window above without breaking stride. A closer look confirmed his initial assumption. The foreigner was settling down in his room. Satisfied, he pulled another cell phone from his left pocket, the one reserved for outgoing calls.

He spoke Arabic in a low voice. “Everything is set. We will move in soon.”

“May Allah be with you,” the voice on the phone replied.

Paco checked his watch again. In a few hours it would be all over, he thought. His cousin had agreed to house them and their parcel for the night, for a small fee, of course. The final delivery and exchange would take place on a deserted stretch of road along the coastline. He tensed when the cell phone on his right side buzzed again. That was unexpected.

His companions stared at his gaunt face, worried. With a sense of foreboding, he flipped the cell phone open and swallowed hard.

The voice on the phone carried the harshness of someone used to giving orders. “I want the man alive. I’ll double the reward.”

Paco shuddered at the venomous tone. He suddenly felt a stab of pity for the foreigner. Better for him if Paco had been forced to kill the man; the fate that awaited the infidel in the hands of his employer was not to be envied. His life would end all the same, but not before hours or days of torture.

It was mid-October, and an early fall chill was in the air. He raised his head and thought about kneeling down to the east to pray for the success of the mission. The look his comrades gave him convinced him that this was not the time.

Gazing at the third-floor window, Paco saw the light go out. At that instant, he suddenly knew in his heart that his destiny was linked with the foreigner in a dance of life and death. Dusk was settling in quickly over the Rock of Gibraltar, and Paco and his accomplices prepared to strike. 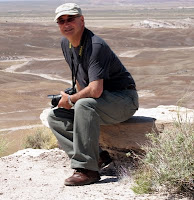 Nomad on the Run is available online at www.bookstandpublising.com and at selected Chapters/Indigo and Book City bookstores in Toronto.

Georges Benay is a retired bank executive who has rediscovered his long lost passion for creative writing. In addition to Nomad on the Run, he is the author of several short stories. You can visit his websites here. In June, Georges gave a reading from Nomad on the Run at CJ's Cafe in Bronte. Our next reading at CJ's will be Sept 13, starting at 6:30. Everyone's invited. (More here.)