"Falling In," a hiking story by Bert Jenkins

Southern Ontario hikers just love the Adirondacks – big peaks, long days, substantial elevation gain, good views, and 46 peaks over 4000 ft, many remote and some trail-less. After a few visits you find yourself drawn into a select group of obsessive-compulsive conversationally-limited asocial list-makers whose objective is to bag ‘em all. I’ve done about twenty, so there’s still a ways to go before I can call myself a 46-er. Today’s objective was Skylight, 4926 ft.

Sound simple? Not quite. From the north, Skylight hides behind a tangle of other hills and high passes. The logical approach involves substantial gain and loss of elevation just to get to its foot. And the logical return passes over Marcy, at 5344 ft the highest peak in the Adirondacks. 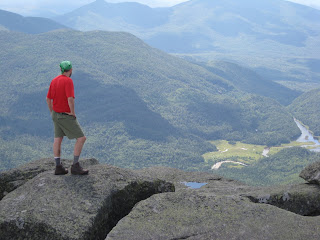 It was a long day and I reckoned 12 hours would be fast. A five-o’clock start would be a good start. But getting up at five is an act of faith: it’s still dark, you can’t see the hill tops from the campsite, and even if the sky’s clear there’s no guarantee the tops are. At the trail-head only one thing was clear: they weren’t. Not only that, but it looked like rain.

But your rough, tough southern Ontario hiker is not put off by the prospect of a few showers, particularly if they’ve just got up at five in the morning – they are going to have a good day, choose what.

The cloud pall was unbroken, solid and grey on the stony upslope of the first pass. Steeply down the other side, a long way down, and a little later the trail levels out to cross a sizeable, boggy wetland. About 4 hours to here; not too bad. Might even beat 12 hours for the day…

The trail over the wetland followed boardwalks pinned tenuously over sluggish streams, deep stagnant water holes and tough grass. At the other side of the marsh could be seen the upslope to the trail junction and the first big decision point – is there enough time or not? If so, turn left for Skylight; if not, turn right, downhill, and chicken out.

Now the trail at this point is not a major Park trail and only a few idiots come this way. It would be quite impassable without the boardwalks. It was also quite evidently a few years since these boardwalks had received significant State Park maintenance. They sloped, some planks were missing, some rattled and some were rotten. But if the entire boardwalk looked a little lacking in love, this section, just coming up, seemed particularly dejected.

So what? I’m going like a steam hammer, the weather has improved and it’s without doubt in 10 minutes I’ll be at the trail junction with a left turn uphill and the day done like dinner. So, these planks laid somewhat randomly over that particularly black and anthropophagic puddle: if I step this way on the first of them which slopes down, I can fluidly follow it left foot onto the second which slopes right, and then lightly spring right foot onto the third which just slopes, and land on the gravelly beach and tufty grass beyond. So come on, steam hammer, show us what you’re made of. One step, two steps…

The third plank is not so much loose as not even attached. So for a precious moment there you are, by any mathematical definition unstable, each millisecond subtending a decreasing angle to the horizontal, and all the while articulating, reproachfully, That was a silly thing to do…

So: you are going to fall in. That puddle down there, it’s really only mud, right? OK, wet mud. Your bum would land in it with a glutinous plop and with suitable disposition of well-organized if flailing limbs you would with one fluid if somewhat contaminated motion spring to your feet, muddy but unbowed, and say, Oh Bother! But wait: it isn’t mud, it’s water, water a little deeper than any mere puddle. My bottom hasn’t yet met its bottom; still going; hey, how deep is this? Double-red alert, emergency closure facial orifices, don’t breathe in…

Then at some point action met corresponding reaction, and the great whale breached in a tarnished spray of marsh water and beached on the far side, on land up to that moment dry but getting wetter by each drippy moment.

Look around. Mercifully, no-one to witness the indignity. Shake off drops like a wet doggy. Take pack off. Contents, wet. Pour water out of pack. Shiver. Acknowledge that shivering is good for you. Get out sodden waterproofs, put on jacket. Take off boots, wring out socks, drain boots, replace, socks first. Repack gear.

Stand up straight, grimace and squelch noisily down the trail, like some exhibit from a diorama on evolution, tentatively trying these new things called legs and thinking longingly of the old days when you moved effortlessly and fluidly through cool friendly water on fins and breathed through gills.

Turn right at the junction and chicken out with nary a moment’s hesitation, ignoring the now quite evidently clear mountain tops. Meet all kinds of interesting and more significantly, dry people, and hammer downhill past chasms, ravines and waterfalls; all that water, remember how wet it is? Gain the relative shelter of the ponds at the top of Avalanche Pass and stop for lunch, still wet, but steaming nicely in the humid Adirondack August. Then up over Avalanche Pass and a long hike on good trails back to the car.

A nine-hour round trip. I still don’t know if I can do Skylight in 12, it isn’t as high on my list as it used to be. Early next morning rain like a reverse alarm clock drummed solidly on the tent and it rained for hours, a good day to spend under the dining shelter, dry clothes, a good book and a Guinness or two at lunchtime. 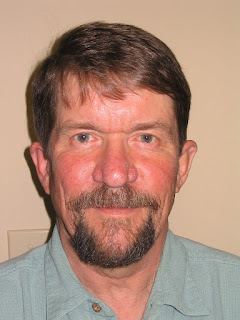 Bert Jenkins is a retired chemical engineer. In the course of 44 years in the chemical process industry Bert has had ample opportunity to practise creative writing. His most widely read works to date have had titles like Phosphoric Acid Purification Plant: Operating Instructions.

Now with Brian’s help he is attempting to apply these skills to fiction where the facts may be just as much a figment of the imagination, but so too are the dramatis personae. He has had a story in his brain for the last 30 years and hopes some time in the next 40 to get it down on paper. It has absolutely nothing to do with the chemical process industry. Bert’s other passion is the outdoors.

On December 8, Bert gave a reading of "Falling In" at CJ's Cafe.