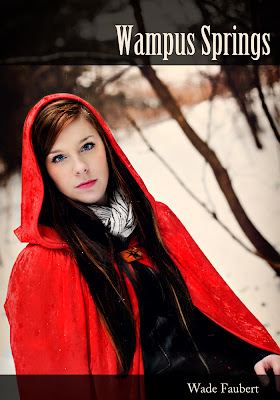 Hi Brian,
I just wanted to thank you for your evaluation of my book, Wampus Springs. I took your advice and saved two of the characters, Ken and Tanya. This does make for a far better ending, with a different twist on a second book in the series. Now I've e-published the book with Amazon.com.
Thanks for all your comments and help.
Wade Faubert

About the Book:
At sixteen years old, Lori Foster has seen a lifetime of pain and suffering. Four years earlier, she watched as her best friends were savagely mauled to death by a rogue wolf, then barely escaped with her own life. The scar on her neck is a constant reminder of just how lucky she was that stormy day in Wampus Springs.

Four years and hundreds of miles from the attack, Lori still searches every shadow for the return of her tormentor. She finds ordinary life to be a struggle, but when she meets Josh Hughes, things appear to get on track. With her best friend Jessica Tanner and her new love in her life, Lori lets her guard down, but it may be premature. When her menstruation begins, her nights are ravaged with nightmares of the attack. The nightmares seem to be more than a coincidence, they seem to hint at an inevitable confrontation between Lori and the wolf that mauled her four years earlier. 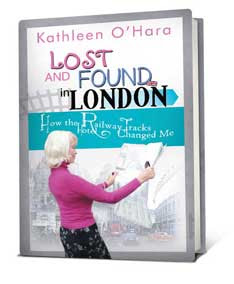 Hello, Brian!
I first attended one of your creative writing workshops in Kingston a few years ago, and then your Strategies for Getting Published seminar at Ryerson two years ago. They were both helpful, but I decided to go ahead and self-publish book, Lost and Found in London.

I describe it as a wise and fun self-help memoir, based on a brilliant man I met in London, UK, who promoted a wonderful combination of personal and political change.  You can find a Synopsis, Readers' Reactions, and Where Available in Toronto and elsewhere on my website:  www.kathleenohara.ca

Of course, it's also online at Amazon, Sony, Barnes & Noble, Books on Board, Scribd, and Kobo.  I must say I had no idea how much fun it was to be an author!
Thank you for your help!
Kathleen O'Hara

Some call it the Canadian Eat, Pray, Love, but better!

Lost and Found in London:  How the Railway Tracks Hotel Changed Me by Kathleen O’Hara.

Kathleen was lost in London; now she is about to be found. Her stay has been rich and exciting – museums, galleries, influential people. Romantic trips with a new lover. However, UK authorities say it is time to go! It’s not their problem she doesn’t want to leave – and has no idea what to do next. Fortunately, the right person comes along.

In his cozy, Wimbledon home, a.k.a. the Railway Tracks Hotel, Chris leads Kathleen through a unique series of exercises that enable her to identify who she is, the life she really wants – and how to get it. Back in Canada, she realizes her dream: to write a book that will inspire readers in the same powerful way Chris inspired her. It even includes the exercises.

Lost and Found in London: How the Railway Tracks Hotel Changed Me isn’t only about personal challenges. It also deals with the need to combine internal and external change, tackling key issues confronting our planet – climate change, social inequality – as few books dare to do. It is a timely, thought-provoking, but fun guide for these uncertain times that could potentially change one’s life.

Kathleen O’Hara has lived and worked in Toronto, Ottawa, Paris, and London, with three hot winters in Mexico. Her varied career has included top positions in government, a political party, non-governmental organizations, and the media. As a writer/editor with the Issues Network, her columns appeared in most Canadian daily papers, including the Toronto Star. This is her first book.

Lost and Found in London: How the Railway Tracks Hotel Changed Me is available in most independent bookstores from Toronto to Brockville, Ontario.  It can also be ordered online at www.amazon.com. For more information, visit:  www.kathleenohara.ca.