"The Great Randini," an excerpt from The Story of Sam and Cathy by Brandon G. Kidd

“I am The Great Randini!” the boy exclaimed, holding his arms over his head.
It was the Friday before Halloween at Sir John A. Public School and Mrs. Martin’s Grade Four class was having a carnival that afternoon.
Several different children had set up games and booths around the class where candies could be gambled at The Wheel of Fortune or traded for a guided tour through the Haunted Cloakroom.
But Randy Miller – pardon me – The Great Randini, was quickly standing out as the main attraction.
Randy sat behind an upturned cardboard box covered with a black satin cloth wearing a polka-dot, plastic shower curtain over his shoulders and a bath towel wrapped turban-style around his head.
He was raking in his classmates’ tootsie rolls and lollipops in exchange for glimpses into their futures. Things were going swimmingly, but the afternoon hadn’t started perfectly. Randy had forgotten his crystal ball at home.
Actually, his mother had hidden it from him. It was a favourite flower vase of hers and she feared it would not survive the day’s activities. For a fortune teller of less skill and magnificence this might have been an insurmountable problem. However, The Great Randini simply substituted his Ancient and Mystical Softball of Mystery and never missed a beat.
“Who dares to be next!?” Randy asked, pointing around the classroom. “Who dares to look into what their future holds?”
Mrs. Martin, playing the part of a clown on this occasion, was surprised that Randy could talk so well with his mouth half-full of candies.
Randy put his hand dramatically to his forehead and closed his eyes.
“Do not tell me!” he said. “I already know who will be the next to step forward — I am The Great Randini!”
Randy slowly swept his hand back and forth across his audience of other nine-year-olds and suddenly pointed directly at one boy.
“You!” he exclaimed, opening his eyes wide. “You, Sammy Blackburn! You will be the next brave soul to gaze into his future. I have forseen it!”
Sammy was game. He stepped forward and sat down at the black box across from Randy.
“I was right! He sits! Behold the power of The Great Randini!”
Randy sat down across from Sammy.
“Give me your hand, brave one,” said Randy as he grabbed a hold of Sammy’s hand across the box, placing his other hand at his forehead.
“Now, Sammy, place your offering on the Black Altar of Fate!”
“Whaddaya want?” asked Sammy.
“Today the sprits are demanding peanut M&Ms.”
“I only have plain ones.”
“I have consulted the spirits and they will also accept plain M&Ms.”
Sammy put his candies on the black box and Randy closed his eyes.
“Oh yes! Oh yes! I am beginning to see something now. The spirits are giving me a vision. They are showing me … a face! The face of … of … of your best friend!”
“Dave?” asked Sammy.
Dave was standing in the audience watching over Sammy’s right shoulder.
“No!” Randy corrected. “That is not the face the spirits have shown me.”
“Well who is it then?” Sammy asked. This was getting good. Randy was a fun guy.
“I see… I see a bright smile. But the picture is very faint. Perhaps if the spirits were given an additional offering...”
Sammy put down another package of M&Ms.
“Oh yes! I can see it more clearly now. This smiling face is moving toward you. Closer … closer … and … Oh! Oh no!”
“What!?”
Randy threw his head back and forth. “It is too awful, Sammy. I do not have the words.”
“I’ll give ya my Oh Henry! bar.”
“Oh yes! The words are coming to me now.”
Now not only Sammy was listening, but half the class was watching the performance as well, Dave more closely than anyone.
“The face of your best friend is moving toward you. Closer … and closer … and closer! And your best friend is … is … is …”
“What!?”
“Your best friend is kissing you!”
“Huh!?”
The audience started laughing and twittering.
“Is it a girl?” Sammy asked with raised eyebrows. “Who is it?”
“Yeah! — Who is it? — Who?” asked the other students in the class.
Other boys might have been embarrassed at this point, but not Sammy. He had outgrown his cutie stage and was already enjoying the attention of several girls in the class, each of them now turning their heads to give this performance their undivided attention. Maybe The Great Randini was legit.
“The spirits are not revealing a name to me,” said Randy. “But! I can see the colour of her hair!”
“Yeah?”
“Her hair is … is … is …”
“What!?”
“Orange!”
Orange? Sammy looked over his shoulder at the girls who were all looking around at each other. Not a one of them had orange hair.
“C’mon, Randini,” said Sammy. “Who is it really?”
“Oh!” Randy breathed, letting go of Sammy’s hand and pressing both his own hands to the sides of his head, “I can tell you no more! The spirits have exhausted me. I will accept these delicious offerings on their behalf and replenish my strength. The Great Randini must now ask for the bathroom pass.”
Exit The Great Randini, stage left.
“What didja make of that?” Sammy asked Dave. “Do you think Randy actually knows something I don’t, or was he just pretending?”
Dave shrugged his shoulders.
“Beats me, Sammy. I know this for sure though. I may not have orange hair, but I am your best friend and there’s no kissing in our future.”

The next morning Sammy and his family were at the Bridgetown Farmers’ Market with the goal of bringing home the family pumpkin to be turned into a jack o’ lantern for the front porch. It was a busy day at the market. The aromas of mulled apple cider and freshly baked doughnuts hung in the air like garlands. Bushels of butternut squash, coloured corn, green beans and potatoes clustered on the ground with leafy sprays of cabbages and kale stuffed between them.
The market-goers slowly waltzed around each other, woollen sweater rubbing against denim jacket. Sammy’s parents, John and Mary, were holding hands and nodding their heads, inspecting the pumpkins arrayed on the ground before them, but Sammy, who should have been giving more than his share of input, was notably silent. The pumpkin farmer also brought puppies that day.
Sammy was transfixed. There were half a dozen of the little squeaking and guh-ruffing balls of fur in a fleece-lined basket. Their eyes were barely open. Sammy’s eyes, however, were as big as the harvest moon.
“Oh, John, look at him,” cooed his mother. “Isn’t that sweet?”
“Yeah, sweet.”
Sammy’s father was conflicted. Pleasant childhood memories of his own dog were dancing alongside visions of veterinary bills and destroyed furniture.
“What breed are they?” he asked the farmer.
“Good question.”
The pumpkin farmer wore an old plaid shirt and denim coveralls. He was a tall and slender man in his late sixties with wisps of thin, gray hair sticking out from beneath his straw hat and up from the open collar of his shirt.
“The mother’s a lab-retriever-something-or-other and the father is your best guess. Vet says they’re all healthy though. Just weaned. And free to a good home.”
Sammy’s head spun around and up to his parents so fast it was in danger of twisting right off his neck. He didn’t say a word. He didn’t need to. He let his big, brown eyes do the talking for him.
Sammy’s father looked over at his wife, wearing his best “I don’t know” expression, to see those same big, brown eyes staring over at him from her face. Damn. He was out manned and out gunned. Vet bills or no, destroyed furniture or no, they were going home today with one of those puppies whether he liked it or not. But he wasn’t saying yes. Not yet.
“Now, son,” he began, crouching down to eye-level with Sammy, “if we got one of these puppies, he would be your dog. You’d feed him and walk him and play with him every day.” 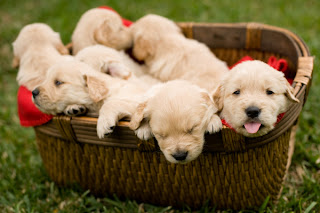 “Well, yeah! That’s the fun part,” said Sammy without a trace of guile.
The farmer couldn’t help laughing at that, a jubilant wheezing sound.
Sammy’s father tried again, hoping to drive home the import of this occasion, of this potential new responsibility, to his son.
“You know dogs live for a long time, Sammy.”
“I hope so!” Sammy shot back, serious as a heart attack.
Now Mary was laughing too.
“Well…” John Blackburn still wasn’t giving in, not yet. “If we got one of these puppies today —if we did— which one would you want, Sammy?”
Sammy turned his attention back to the puppies in their fleece-lined cave. They were all rooting around one another, each one trying to get to the warmest spot possible underneath his brothers and sisters, away from the noise and light of the market. But there was one puppy lying on his side on the edge of the basket and looked to be half asleep, content to enjoy the gentle rocking motion being generated by his siblings. He was orange with brown markings on his face. He had pointy ears like the rest of his siblings and a fox-like look to him. The puppy’s mouth was open and he was panting. Or was he just smiling?
“That one!” said Sammy. “Please, dad?”
“Yeah, please dad?” Mary Blackburn said as she slipped her hand into her husband’s back pocket.
With a shrug and a sigh, Sammy’s father decided to give in and hope for the best.
“Well … alright.”
The farmer looked pleased. “Congratulations. I’ll get you something to carry him in. And I can recommend a good vet.”
In the car on the way back home, Sammy was cradling his flea-bitten bundle of fluff like it was the most precious and delicate thing in the world. Sammy insisted that they take the puppy home straight away as that would be the most responsible thing to do. Sammy didn’t look up from his sleepy new best friend the whole ride home, not once. He poured all his attention into his lap, as though he would memorize every hair on the puppy’s body. This warm, living, moving being nestling into his lap was suddenly the most important thing in his life.
His father looked frequently into the car’s rear-view mirror to observe the growing silence between his son and his new best friend.
“You’d better start thinking of a name, son,” he called back.
Sammy heard him but didn’t respond.
Mary sucked in a breath of air and looked over at her husband.
“Oh! We forgot the Jack o’ Lantern.”

Brandon Kidd is a library worker and aspiring author in Guelph, Ontario with too little spare time and way too much formal education. He is currently in the process of revising his first novel and preparing it for publishers.