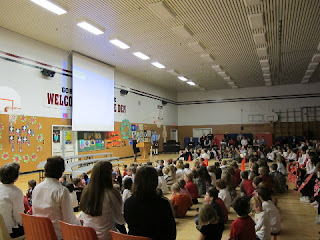 So today, Yasmin's school had their Remembrance Day assembly, and families were invited to attend if they wanted to. I just got back from it and wanted to share with you a little about it, because many things struck me as extraordinary about it.

The children were so quiet and well-behaved all the way through. We had heard the children, even the toddlers, at Yasmin's old school, were also very quiet and respectful for the minute of silence last year. I think somehow children just "get it".

When it came time to sing "O Canada", it was very moving: all the children in the English stream sang in English, all the children in the French Immersion programme sang in French, and the two languages melded so beautifully. And in the last couple of rows at the back, near where we parents were sitting, the older children were also signing the words.

I wish I could remember the name and rank of the army gentleman who attended. He stood at the front as representatives came up to him, class by class, to present him with the hand-made wreathes of poppies, and as each child or pair of children approached, he saluted them, then took the wreath. Some wreathes were clearly made of children's hand prints cut out of red construction paper; one wreath was white; another was pink; most were circles but two or three were squares. All were beautiful.

I believe it was the music teacher who played for us a song by James Kelly, called "A Pittance of Time". He explained that Terry Kelly was in a Shoppers Drug Mart at 11 am on November 11th, and the store made an announcement over the PA system that there would be two minutes of silence for Remembrance Day. One man refused to respect this and tried to get the cashier to ring him through anyway. Snaps to James Kelly for writing a song about it, and such a moving song too:


The principal made an address and then asked us all to stand for two minutes of silence. There was a recording of the Last Post, and then silence. Everybody, even the nearby toddler who had come with her mother, was silent. Then Reveille and the end.

The song by James Kelly reminded me of the time I was working in the box office at the Grand Theatre in Kingston on Remembrance Day. I noticed it was 11 am, and I said to the next person at my window, "It's eleven o'clock, I'm just going to stop for two minutes for Remembrance Day."

"Oh, okay," she said. And she picked up a brochure from the rack outside the window and began flipping through it.

When the two minutes was up, I completed her order and off she went - and the next person in line stepped up and said, "I'm so glad you did that. I hadn't noticed the time. Thank you."

May we all notice the time, at 11 am on Sunday, and pay our respect and show our gratitude with two minutes of silence. 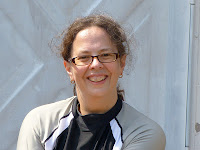 Mary Steer lives and writes in the GTA. Born and raised in Kingston, she had her first piece published in The Whig-Standard when she was 19. She has been addicted to writing ever since, and is currently working on a memoir of time spent in her other favourite occupation, working as an artists' model.