West Wind, it’s called, the last one, the unfinished business yet so very complete.   Experts describe the painting as “a symbol of romantic solitude,” “a magnified bonsai” and “iconic.”  This canvas features a single tree, with sinuous branches almost bending to kiss the pink granite rock from which it originates.  The sky above is undercoated with vermilion, expertly left uncovered in spots to portray a moving, windy sky.

The clouds blow as if the wind had some agenda, some destination or purpose, not unlike an old woman, head bowed, on a private and pressing mission only she can divulge but won’t. The legacy of Tom Thomson – the art nouveau style, his depressive state, the bottom of the lake from which his body was recovered – still lives on as does the art and the mystery.

He consumed many hours transferring the sketched image of West Wind to canvas, pencil translated to paint, all the while deciding where the tree should be, where the wind would be seen or not seen, where the red would meet brown, meet blue or ochre.  It was fall, after all and the west winds would blow in and conjure the waves that would pound the rocky shore that would darken under the damp.

All had to be mixed to precision in order that the portrayal be honest and unpretentious, revealing and real, true to spirit and country and then, only then, could he pronounce it finished.  But it was not.  He abandoned this masterpiece, on purpose, not on purpose, it will be never known, to dive forever into the murky depths of Canoe Lake.  His death, on purpose, not on purpose, left the world West Wind, finished or unfinished, is what it is.

But what, actually, is it?  A study in movement by one of the most accomplished artists in Canadian history?  A labour of love, a dedication to the art of art?  Or perhaps, among the critics, the admirers, the collectors, there isn’t an explanation.  West Wind just blows, and the sky transforms from grey to cerulean in an instant, and the whipped waves form a cornucopia of moody blues, whites and greys, and the pine tree in the foreground, bent, twisted and majestic endures, despite the impossibility of feeding from the inch deep soil it occupies.

He would never know how his work would elevate his status, from a poor painter living hand to mouth in Algonquin Park who could never quite hold down a regular job, whether as park ranger or graphic artist, to a Canadian legend.  He would never know if Winni Trainer actually carried his baby.  He would never know how my heart would be wrapped in awe by the sheer beauty of a single tree on a single rock on the shores of a lake in Northern Ontario. It is my West Wind, with soul and without pretence, done or undone, suicide or accident, it all doesn’t matter as it rests in my pure Canadian heart. 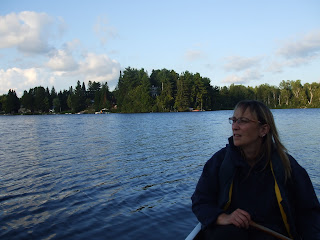 Val Cureton enjoys writing short stories, flash fiction and is currently working on draft two of a middle grade novel involving one of her first childhood loves, lake monsters. Her work has been published in Canadian Stories Magazine and on Quick Brown Fox.

A busy hockey mom and wife, Val can be spotted at the rink with her laptop at the ready in case inspiration strikes.