"Reflections on Home," by Angela Priede

How do you give it up? A home is not an old pair of shoes or a second tea biscuit. It’s not something you bought yesterday only to discover that you didn’t need it today. Some say it is just a chattel, just bricks and mortar, though in our case it sometimes felt like toothpicks and duct tape.

Regardless of its label, to me it is our home. At times it seems a part of me, ingrown in every organ. Not that it hasn’t seen its share of bad times. Perhaps that’s  part of the tie that binds – the trouble and woe.

Starting with the actual construction, this house has been like a challenging child. To give a little background: my husband and I married in our early twenties – not unusual in the sixties.

Our first abode was what you might call “an apartment with character”.  It had the ideal location – directly above a hairdressing salon, only one block from the hospital, and, best of all, kitty corner to the Dairy Queen! Bliss! According to Maslow, most of our basic needs were already met. But we longed for a house of our own.

So, with a realtor in the family, we grabbed the first place we could afford – a semi in the wilds of Bramalea – a new “planned community”. But what were they planning, these architects of suburbia? Perhaps the plan was to fill the pockets of the oil moguls. Certainly it was necessary to have a car to do the simplest of daily activities. There were no corner stores, no little piazzas in which to mingle with neighbours, just paving and lots of chain link fences.

But never mind, my husband could walk to work! So, from a one-bedroom walk-up we climbed onto the mortgage wagon never to regret it.  Our lot seemed gigantic – we revelled in thirty by one hundred ten feet of possible garden.

We were overjoyed that our three tomato plants grew well, even if the Japanese maple died. And that first winter, though it delivered enough snow to completely bury our little blue Volkswagen, brought only a sense of snow-shovel adventure.

We were momentarily content. My husband had almost forgotten the wonderful Chevelle Supersport 396 with mag wheels that morphed into a house down payment. We completed our first renovation. Almost heaven. But we did so want a little more outdoor  privacy.

So, again with the help of our realtor, we lucked out on a one acre parcel of land in the township of  Chinguacousy, which, if you don’t know, is the First People’s word for “Land of the Tall Pines”. I firmly believe in omens. “Pine” is the Latvian word for “Priede”, my husband’s last name.  This was meant to be.

Against the given odds, given our naivety and youth, we decided to build the house of our dreams. Not having the necessary carpentry skills ourselves, we scanned the local paper to find a builder. Construction began, halted, restarted, halted. To say progress was unreliable was an understatement. The builder had his license revoked – something to do with cutting through a main beam.

The local farmers referred to the shell of our house as “that modern one”. I called it the one with the big windows. And I loved it! Eight months passed and we were still living with the in-laws. Pressure was mounting.

Optimistic as we were, we moved in. It was sort of a comedy film set in the depths of winter. The kitchen had no cupboards or running water and the windows leaked snow.

But, we thought with gratitude, we would have our king-sized bed again. Dell the Mover seemed to have a different script. The bed and frame somehow disappeared while in storage. We argued the probability of that scenario, but gone it was.

Luckily we were campers! Out came the air mattresses. A bucket held snow nicely so we could melt it for tea for our first visitors (though later we found that lowering it into the well was much faster) and we gradually settled in.  I seem to remember a line from a pioneer novel – something like:  “But the land was good and the water was sweet”.

We continued to ignore our friends’ predictions of financial ruin. And so, with my student loan, one salary and a vehicle that could be lifted over the snowdrifts by a few husky men, we embarked upon our next adventure.

Years have passed - forty-two now - in this same place. Memories of those early years run deep. But the ones that followed run stronger.

I wander through the yard – past the well. Here is where my husband built the tire swing for our toddlers. And on that rise, the spot where our firstborn joyously picked me a dandelion bouquet. And here is our veggie garden, which once lay in full scorching sun, yet now struggles to produce crops in the shade of towering pines.

In the corner rests the derelict chicken coop, a father and toddler project, which is now the repository for old tires. Nearby three faithful dogs lie buried under the trees. Dogs that bounded round the maples as we drilled sap holes each February, dogs that lept over the split rail fence and warned us of anything unusual, be it squirrel or deer. I am reminded yet again that time, seasons and the passages of life are beyond the designs of man.

Back indoors I plug in the kettle. Tea and melancholy are compatible bedfellows. Nipping upstairs to retrieve my favourite mug, I pass the almost-finished stair rail. I am reminded of the day our daughter, the never-to-be-left-behind middle child, at the age of three, tried out her gymnastics skills on the banister. Stitches, yes. Fear, no.

And here is the bedroom where our youngest son was born. That was before he burned a hole in the kitchen floor with a scientific experiment. Parents get smarter with age. We replaced the vinyl tiles with fireproof stone, which awaits the next generation of young inventors.

My mind drifts to the basement, then to the loft. Once filled with trikes, bikes, skates, and Lego boxes, they now hold mementoes of the dear departed , too precious to release, too numerous to hold. Like us, they await their unknown fate.

As yet, the time has not come. I sip my tea. I paint in my studio. And, especially in the quiet hours alone, I think on the years gone by – of how this little room was once a nursery with seventies gingham and boldly flowered wallpaper.

I look out the window onto the lichen-covered crabapple tree – the one that stains the walls pink with springtime reflections. I marvel at the late visit of an unusual band of robins. I note that we have outlived four large maples, three white pine and an olive tree, not to mention a good many guppies and one escaped snake.

I chuckle at the remaining two “mugho pines”, robust specimens, higher than our house. Didn’t the tag say “grows 2- 4 ft”?  I marvel that our children somehow survived despite all our parenting errors and have matured, found careers and established homes of their own. That they are as special and precious to me now as on the day they were born. And I think to myself, “There is only one peril in moving – that too much of my heart may be left behind.”

And so, once again, my husband and I make a pact that we’ll be here ‘til they take us out in wooden boxes. And our kids, knowing that the accumulation of years might possibly be theirs to deal with, answer cheekily, “That’s fine. When it’s time, we’ll have the matches ready.”

‘Til then, here we are with our stuff, our kids’ stuff, and our ancestral stuff – all tucked  together in our same old home. Most of our friends have upsized, downsized, moved North, South, East or West. But here we’ve stayed. And that’s just fine with me. 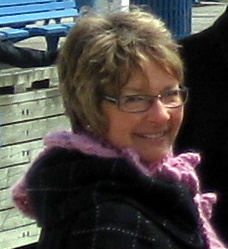 Angela Priede lives in Caledon with her husband. In retirement she is taking the opportunity to test new creative waters, the latest being writing. She enjoyed Brian Henry’s Life Stories class in the fall and has begun sharing memories with other writers. This has been hugely pleasurable on a personal basis, but the writing is ultimately for her family, with love. Angela blogs here.

Starting the beginning of April, Brian will be leading Life Stories classes on Monday mornings in Mississauga (see here) and Monday afternoons in Brampton (see here and scroll down), and he'll lead a Welcome to Creative Writing course on Tuesday afternoons in Burlington (see here).
To register, email brianhenry@sympatico.ca

Also, he’ll be starting two Next Step in Creative Writing classes – on Thursday afternoons in Mississauga (see here) and on Thursday evenings in Georgetown (see here).
To register, email brianhenry@sympatico.ca