“Calling all Burglars,” by Melanie Lefebvre

Any minute now, her house would be robbed, and she’d be to blame.

The coarse holler snapped her back into focus and she nudged her way through the unorganized queue to grab her order.  She had asked for a venti but was too defeated to play the assertive card.

As she perched on a seat by the window, she regretted her decision to go out for a coffee. Why didn’t I double-check? she berated herself.  She should have made sure her front door was locked!

She sipped her chai and tried to pull her mind away from the repetitive doubt.

“Good checking is checking once,” the voice of her therapist echoed in her mind.  Had she checked once?  Or had she been too distracted by her neighbor. The man had looked up from his gardening to make small talk just as she’d been leaving. He’d broken her pattern entirely.

Now she could feel the urge creeping in to head back home, just to check she had locked the door.

What if the damage was already done?  News reports of recent robberies in a nearby subdivision taunted her.  The crooks were surely ready to graduate to new territory and an unlocked entrance made for an easy target. The thieves had the setting sun on their side, too – lots of shadows to evade detection.

A ransacking felt inevitable. Her urge was morphing toward panic.

She swallowed a gulp of tea. Any ancient wisdom about tea being a calming agent felt like a boldfaced lie.  Her bloody therapist – all his words seemed like mockery.  She felt as though she’d regressed four months but, underneath the layers of fear, knew better.

To regress would be to return home to check the lock.  Or would it?  Everyone has relapses. It’s practically the in thing to do in Hollywood.

But this wasn’t The Real Housewives of Beverly Hills.  If she did it, if she let the allure of doubt win, she’d have to admit defeat to her therapist – she wasn’t paying $150 a session to lie.

Then again, it was her hundred and fifty bucks. He didn’t have to know.  This was her mistake to make.  Yes! She chugged back the last of her tea, clumsily grabbed for her coat and darted towards the door, brushing past with the newly arriving caffeine addicts.

The drive home was twelve and a half minutes if she got all the lights, fifteen if she didn’t; relief was imminent.  But as she went to reach for her car keys she realized she was still holding her empty cup of tea.  And it clicked: she was holding onto something she no longer needed.

She had checked the lock. She must have – there was no way in a million years she would have forgotten to check. She took a deep shuddering breath, then walked towards the trashcan and tossed her empty cup.

Maybe this ancient tea wisdom thing is on to something, she mused, and headed back in to Starbucks for her venti. 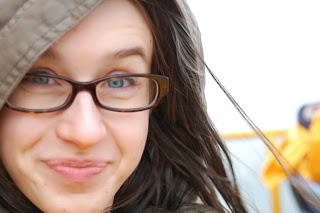 Melanie Lefebvre’s first stab at writing was at age three with her self-proclaimed cutest title, “I Cleaned a Little.”  She’s written leisurely since but her husband’s recent gig with photography has inspired her to kick it up a notch.  She’s checking out the Northern Ontario writing scene in hopes to grab her hobby by the horns.  And if nothing else, there’s always NaNoWriMo.