The Purchase by Linda Spalding, reviewed by Tracey Ormerod

Most of us, at one time or another, have likely acted with the best of intentions only to find that the end result really didn’t turn out the way we’d hoped. As the old saying goes, “The road to hell is paved with good intentions.”
So it is for Daniel Dickinson, the family patriarch and protagonist of Linda Spalding’s Governor General Award winning novel The Purchase. Dickinson finds himself excommunicated from his Quaker community after he chooses to marry Ruth, an indentured orphan girl, rather than sending her back to the almshouse after his wife dies.
What follows is a chain of events that map a descent into a sort of hell for Daniel and his family. Leaving the rational and “civilized” behind, he leads them into the wilderness on a southerly journey down to the frontier of southwestern Virginia.
Will the new frontier be the promised land of freedom that Daniel envisions or should there be a sign, like the one posted at the gate in Dante’s Inferno, warning him to “abandon all hope, you who enter here”? Spalding’s signs are more subtle and evocative, artfully woven into a narrative landscape of “sorrow” and “devilish still growing pines.” Throughout the novel, the landscape is a hauntingly dynamic entity that participates in and reflects the characters’ experiences. It is at times magical and at others dark and brooding.
The family’s descent builds momentum once they start to settle in Virginia. Attending an auction to purchase much needed equipment for his new homestead, Daniel’s right arm goes up “as if pulled by a string” and he finds himself the owner of a young slave boy. He tries to rationalize that his action is somehow driven by spiritual intent but regardless, the purchase throws him and his family into debt and away from the freedom of Daniel’s dreams.
In their new world, children will kill and be killed, and neighbour will be pitted against neighbour. There will be deceit, thievery, envy, greed, and the judgement that Daniel thought he’d escaped upon leaving the Quaker community.
In the standard quest or journey narrative, we expect that the hero will have a mentor. But Daniel only has Virgil’s Aeneid and the Quaker catechism, and his isolation is palpable as he strains to hear the “inner voice” of guidance. It remains silent.
However, despite his hardships, it’s difficult to feel sympathy for Daniel, and not because he has “reaped what he sowed.” Rather, it’s because his character is so remote. Mistakes can be overlooked where there’s empathy, but that would be too far a stretch with Daniel. His character arc is more like an allegory in which his individual personality and the events that befall him tend to embody a moral quality rather than creating depth of character.
Where we do find more depth is in the women Spalding has created. Their lives may be tossed to and fro by the whims of the men, but each of the central female characters manages to shine some light on their world. They are the nurturers, the gleaners, and the healers. It’s not that they don’t make mistakes in judgement; but when they do, they learn from them.
It is also through the women that there is a glimmer of redemption at the end of the novel when Mary, Daniel’s daughter, and a slave named Bett rise up and head north to escape the hatred and violence.
Mary isn’t ready to escape until she admits to the darkness in herself. In our present day world, readers of The Purchase may find an echo of such darkness in ourselves. As Spalding says, “I’ve done things that go against everything I believe. It is my suspicion that most people have.”
This is not a light and casual read. It’s a multi-layered, thought-provoking work of literature, and if you allow yourself to be fully engaged in the journey, you’ll find it well worth the effort. 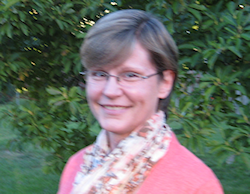 Tracey Ormerod is a writing tutor and website consultant in Burlington, Ontario. After many years helping students and business clients find the right words, she has just recently started clearing her schedule to spend more time on her own work. This is her first piece for Quick Brown Fox.
Quick Brown Fox welcomes book reviews and other book related pieces. Quick Brown Fox also welcomes reviews of plays, movies, restaurants and anything else that catches your fancy. Right now, I’d especially love a review of
Blood by Lawrence Hill
A Tap on the Window by Linwood Barclay,
The Orenda by Joseph Boyden,
The Winter Palace by Eva Stachniak
The Headmaster’s Wager by Vincent Lamb
or any of the books on the short list for a Giller Prize or for a Governor General’s award.
If you have questions about submitting a review – or to send me a review – email me at brianhenry@sympatico.ca
More information on submitting reviews to Quick Brown Fox, here.