I was four when I got the brilliant idea to paint my father’s car. There were many half-empty paint cans stored in the garage, and the poplar tree in our back yard handily supplied nature’s very own paint stick.

We lived on a quiet street in a very new subdivision in what was then the village of Stoney Creek. It was the 1950s, WW2 was over, and most of the homeowners were young first time buyers of modest homes, thrilled to be gainfully employed, married and starting families.

Kids played outside with minimal adult supervision, most wives didn’t work, and grew to know each other through their children at play around the neighborhood, in parks or through the local schools. The husbands worked and were brought into the social fold through the wives and children. It was a time when neighbours got to know one another, and if there weren’t any sidewalks in the new survey, the men of the neighborhood worked together to install them. 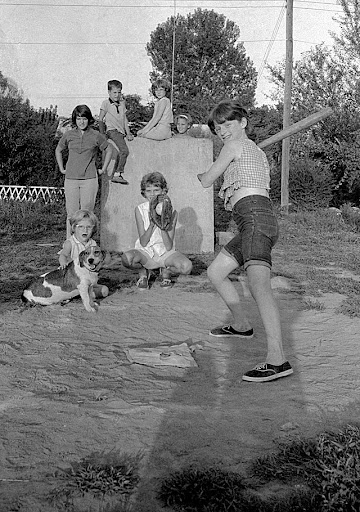 Perhaps it was all the discussion about cars from those men and the use of the word horsepower that set my imagination on fire. What if I jazzed up the side of my Dad’s car with some colourful lines and swirls? Suitably decorated, our car could whinny its way out of the garage to the delight of all.

I began applying swirls and curlicues on a Saturday morning when the car was parked in our driveway and Mom and Dad were inside the house relaxing. I must have been quiet for longer than normal, and it was my father who ventured over to peer curiously at the car. I could hear his quick intake of breath, and then a faint chuckle.

Other fathers were taller and louder, pronouncing from on high and occasionally flinging bolts of verbal lightning at their offspring. That wasn’t my Dad’s style. Crouched down beside me, he looked me in the eye and asked, “What is that you’re painting?”

He always liked to know what was going on in a little person’s mind and when you spoke with him, you felt heard.

“Nothing a little bit of solvent won’t fix,” I heard him telling my mother later. That was my Dad – he could fix anything and seemed to have an amazing well of wisdom and compassion. Crouching down beside the car together, I knew enough that I wouldn’t be using the car panel as a canvass any more, but Dad handled the situation with kindness and humour.

A couple of years later, we found ourselves driving in that same car to the local hardware store. Of course neither my Dad nor I were wearing seat belts – it was the fifties, after all! I remember looking at my father’s profile and seeing a sort of grimness settling into his features. He gripped the steering wheel a bit tensely. We were on our way to replace a broken window pane in a neighbours’ house just up the street.

The house was owned by Winnie Beale and her husband Harald. They had two children at the time: Raymond was 11 or 12, and Jimmie was just a kid my age. Raymond had been adopted by the Beale’s, and Jimmy was being fostered by their family with the possibility of adoption if things went well.

Mrs. Beale provided a great deal of oversight to the boys or anyone else playing out on the street, leaning against one side of their screen door, cigarette dangling from the corner of her lips. She would remove the cigarette to occasionally issue instructions: “Stay off that driveway” or “Watch that ball! Don’t let it hit the car” “You’ll crush the bushes.” Then she would vanish into the house, and play would resume.

Raymond was a different child when she was around. He’d already figured out what he needed to do to stay in her good books, and he was adept at currying favour when his mother was visible, promptly forgetting her dire warnings when her back was turned.

That particular day Raymond, Jimmie and a couple of other boys were throwing a baseball around, playing catch on the street and on the lawn in front of their house. Winnie and Harald were out for the afternoon when an errant baseball thrown by one of the kids crashed through a small window at the side of their house.

Jimmie was frantic and ran to our house in tears, wanting to speak to my father. Jimmie knew he was in for it; he was not Winnie’s favourite, and would catch hell for the breakage. My Dad got his measuring tape, calibrated the dimensions of the window and that was how we found ourselves at the hardware store, getting a piece of window glass cut to order.

My Dad replaced the window before the Beales came home and all seemed fine. But somehow the news of that broken window – possibly Raymond currying favour again – made its way to Winnie’s ears. She definitely wore the pants in the family, and it was her unshakeable opinion, now confirmed by this incident, that Jimmy was an “incorrigible delinquent.” Within the week, he was gone, sent back to the Hamilton-Wentworth Catholic Children’s Aid Society.

I’d never seen my father weep before, but he did then, at the cold-heartedness shown to a child and the thought of what this rejection might do to this small young boy. It left me with a gnawing sense of unease: it seemed there were some things my father couldn’t fix, no matter how wise or compassionate he was.

Others may remember the fifties for the Cold War, but the lessons I learned from this decade were more immediate and personal:  unconditional love was in short supply, not only in the world, but sometimes within families. There were expectations tied to love and belonging, and sometimes it really wasn’t love at work, but something else that was darker, unacknowledged and unnamed and that could bring dire consequences.

Many seasons have come and gone, the painted ponies have gone up and down, and the years, well they’ve spun by. As an adult, when I reflect on what happened, I wonder if the only thing worse than being rejected by the Beale family would have been remaining an unloved part of it. I never knew what happened to Jimmie, but I hope he found a softer place to land, someone to really care for him, and a chance to be heard.

Dianne Seed grew up in Stoney Creek, now lives in Burlington and is awaiting the birth of her second granddaughter with great excitement. In retirement, Dianne has taken up golf, photography and writing, and hopes she’s a better writer than she is a golfer.