“The Mati,” by Vivian Medeiros

Growing up, we would travel to Greece every two years and spend each summer visiting my parents' families. Both my parents had brothers and sisters so there were always lots of cousins to hang out with. And yes, there were an abundance of Nikos, Marias, Johns and Kostas. It's a tradition to name the children after the parents, so it was very common to have three first cousins with the same name.

So not only, on any given day, would we encounter a room full of people with the same name, but we would inevitably be the recipients of the evil eye! The mati, as they call it, is big in Greece. Greek people believe that this curse can be given through envy or jealousy, or even just commenting on how nice someone looks. So if a man whistles at a beautiful lady as she walks by and then she trips... Yup, that’s the evil eye.

We would always make time to visit each of the villages my parents grew up in. As we got older, most of our cousins would leave the village to pursue their studies, so when we visited, the elderly would be the ones left. And they were always excited to see us and hear our stories from Canada. I secretly believed it was so they could show off their evil eye banishing expertise! My aunt was the most notorious for this. After so many years I had become accustomed to it, but on one of my last trips with my parents after graduating from University, it seemed I wasn't so immune....

"Come here so I can look at you," my Aunt Maria said as she placed her hands on either side of my face and pulled me close. Her weather-lined face inches from mine, she looked into my eyes. Ok, I knew what was coming next and I braced for it...

"Oh look how you've grown!" she exclaimed pulling back for a better look. And then.... "Ftou! Ftou! Ftou, so I don't give you the mati!" she proceeded to spit on me. Because that's what Greek old ladies do. Not a full-on spit, more like a half-spit. It was so that, in their admiration, they didn't accidentally give the evil eye to the poor person.

In my case, however, it appeared that no amount of spitting could save me from this evil eye.

Life in the village was simple and we spent most of the time there enjoying the countryside on the back of a donkey or going to the next village for a festival. I especially enjoyed the festivals as it was a chance to catch up with my cousins and other relatives, and party well into the early morning hours. After one of these festivals, I woke up with a bad headache.

My aunt took one look at me and was instantly concerned.

"No...no...no... You don't look so good. For sure, it's the mati!" I rolled my eyes, trying to be discreet about it. But I must not have been discreet enough, because my aunt bestowed on me her evil eye!

I'm fine, Thia." I suspected it was the fairly substantial quantity of ouzo I had enjoyed the night before, but oh no, that definitely wasn't the way my aunt saw it.

"Tssst," she shushed me in her Greek way. "No. This isn't good. It was at the festival last night, I just know it! You were dressed up so nice. Come on, let's fix this."

She pulled me into the patio, pushed me into a chair, and off she went into the house to get the things she needed to cure me. A few minutes later she emerged, juggling her supplies. I almost burst out laughing at the picture she made. Cradling two empty glasses and a bottle of olive oil, she slowly made her way towards me, careful not to lose the bottle of water precariously perched on her ample bosom. Then her ritual began.

She filled one glass with water and poured some oil into the other glass. She then carefully poured a few drops of oil into the water. According to belief, if the drops of oil didn't disperse, I was fine. I wasn't so lucky. With an “I told you so” look that only my Thia could perfect, she proceeded to say a silent prayer, touching my forehead (my headache), and yawning the entire time (also a sign of the mati).

"There, you're fine now," she gave me a triumphant look, confident in her abilities. And to my surprise, my headache had totally disappeared!

She later gave me the blue charm commonly seen worn by the women in Greece. It is believed to keep the wearer from the curse of the evil eye.  Whether there is any truth in this, I’m not sure, but I still wear my charm – especially when attending those village festivals. 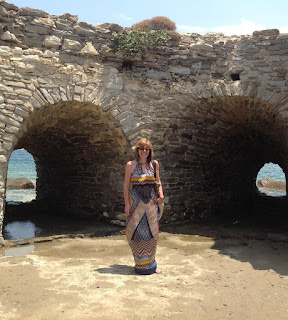 Vivian Medeiros lives in Oakville, Ontario with her husband and 2 children, whom she uses as her sounding board. She enjoys writing in her spare time as well as travelling to Greece to spend time with her family. While her Thia Maria has since passed, trips to Greece always evoke wonderful memories of times spent with her.