“This Little Chair” by Lorena Perkins

There is a little chair which sits nestled in a corner near the warmth of my fireplace.   Most days, its serves as nothing more than a decorative piece in the family room.  But some days, as I’m cozied up on my couch, ready to enjoy some quiet time to read a book, I find myself looking its way.  It sits there, an inanimate object, oblivious to the history it represents.  Yet it carries a wealth of memories of my summers in Italy as a young child. It is my nonno’s chair.

I often wonder how my grandmother has managed to live over 30 years without the love of her life.  It can’t be easy.  She is 92 years old now, and whenever I visit her, I cherish the quiet moments together when we sit and she speaks of past memories – particularly the stories courtship with my grandfather.

As I listen, my imagination is ignited with scenes reminiscent of an old black and white film.  Visions of a young girl peddling her bicycle through her crumbling town as bombs drop in the near distance, the vibrations almost knocking her off her bicycle.  But she is determined to reach the post office – she has to get there – her beloved will be waiting for a care package to make its way to him.  Then … scenes of complete happiness as he returns from war safe and unharmed … scenes of forbidden kisses they would steal as they secretly meet in the cornfields.

I look at her as she recounts these stories – I see a vibrant young woman, so in love and devoted to this man that even the bombing of her village couldn’t stop her. Love does give one courage.   I see a side of her I never knew.

She takes a handkerchief out of her apron pocket and wipes away tears that well up.  She slowly gets up and makes her way into the kitchen – time for an espresso.   I know the story telling is over now, for she is thinking back to the day she lost him, and she has no words for this.

He was 58 years old when he passed away, sadly by his own hand. He was a proud man – worked hard and was relied upon by his family and his friends.  For him, the sole purpose of existence was to provide – he was the patriarch; that was his role.  The cancer took that away and it broke him.  But I try not to think about all that.

I look at this chair, now in my own home, and recall how it always sat under the grapevine-covered pergola of my grandparents’ house and how, during the summer months, on those long hot and humid days when it was too hot for me to play, I would retreat to this little place of shade and watch my grandmother in the garden.

As a child, I always timed the day by my nonna’s daily routine.  Collecting the eggs from the chickens, followed by watering the garden was early morning.  Hand-washing the clothes by the water pump and hanging them up to dry was mid-morning. Entering the house and heading for the kitchen was close to noon, and it meant that my grandfather would be home soon from working the fields.  So I would sit in my place of shade, anxiously waiting.  I would hear that sound.  The sound tires make on gravel.  My grandfather coming up the driveway in his little white mini Fiat.  It was now officially lunchtime.

After lunch, my grandfather would head for this little chair under the shade, always wearing his straw hat, He would light a cigarette and wait for my grandmother to bring out his espresso, which she would, on a small tray, placing it on the round table next to him.  There were no words spoken – but loving looks were exchanged with a mutual smile.  I wouldn’t bother him.  Instead, I would be playing in the garden, watching him from afar. He was a tall, thin man always tanned from working the fields.  I knew this was his resting time before he headed back to work. 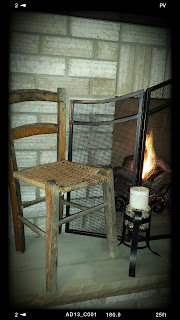 As a child, spending summers in Italy, I had no concept of days of the week.  But I knew that when the routine changed it was the weekend. This was my time with him.  On those summer weekend days, he would sit on this chair and watch me as I ran around playing in the garden.  I knew he’d soon call out for me and I would run to him.

He would hoist me up to pick the succulent grapes which hung from the pergola.  As he sat on this little chair he would laugh as I popped the grapes out of their skin and into my mouth.   He was not a man of many words, and I have to admit that as a young child, he intimidated me a bit, but when he helped me reach for those grapes and we laughed together, I always felt safe and loved.

After my grandfather passed away, I asked my grandmother to keep this chair for me. I made her promise.  She couldn’t understand why I had such an attachment to it, but she kept her word.

Whenever I returned to Italy, I would go to the chair. There it was, stored in the shed in a corner all by itself. It aged more each year. The straw seat frayed, became too weak to be sat upon; the wood grew brittle, a little weather beaten.  But when I saw it, sentimental emotions overwhelmed me and, ultimately, brought a smile to my face. I’d bring the chair outside and place it in the shade. What was once a grapevine pergola was now a patio with an awning, but nonetheless was still the chair’s spot.  My grandmother would smile – she knew I missed him, too.

Two years ago, my uncle, my grandfather’s brother, ever so carefully and meticulously dismantled the chair, to prepare it for its journey to Canada.  My mother brought it back with her.  My stepfather put it back together again. Of all this, I had no idea.  One summer day as we were sitting in my mother’s backyard, she smiled and said, “Wait here...don’t go anywhere. I have something for you.”

The little chair had found its way to me.  I was speechless. 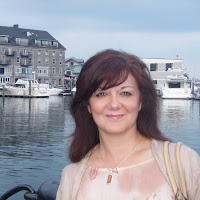 Lorena Perkins was born near Venice, Italy and goes “home” to visit whenever she can.  In June, she will return to spend time with her 92-year-old grandmother and hopes to hear more stories about her courtship with her grandfather and write more about the family history.  Lorena had been writing journals since the age of 12 and has amassed quite a collection! With the encouragement of her husband, she decided it was time to venture into the world of creative writing.  Joining one of Brian Henry’s creative writing workshop was the first step.