“My Favourite Book” by Deb Perris

My favourite book was given to my Mom, not me, but she probably never opened it.  My Mom had no interest in Julia Child’s Mastering the Art of French Cooking. But over the years I’ve come to think of this book as my dear friend, Julia.

It was my Uncle Mike, who lived next door and was a voracious reader, who brought Julia into my life.  My earliest memories include watching Uncle Mike open a brown paper package on a regular basis. Once the paper was removed, he would slit the tape on the brown cardboard that lay inside, then unfold the cardboard to remove a hardcover book.  I thought that it was magical that these books would arrive by mail; he didn’t have to go to the library to find things to read. And only Uncle Mike had books that had hard covers on them. Then, one day, I learned about Book of the Month Club, yesterday’s version of Amazon.

As I learned to read, Uncle Mike would let me peruse the Book of the Month catalogue that came along with the book.  He’d allow me to select a book for myself, and pushed me if I chose something too easy.  My selections ranged from Drew mysteries to a coffee table book titled The Life and Times of Leonardo DaVinci – I guess I was a bit of a nerd in those days.

Mastering the Art of French Cooking was a Book of the Month Club offering that Uncle Mike bought for my mother as a Christmas gift.  The book remained unopened for many years, and I recall my mother saying to her friend, when showing her the book, “What a waste of money!”

You see, my mother was widowed at age 26, with a two-and-a half year old son and pregnant with me at the time.  Hers was not an easy life.  As well, she is Italian, and learned to cook by my Nona’s side.  She didn’t have to use a cookbook unless she was baking, and the only other cookbook in our house was Betty Crocker’s Picture Cookbook. So Julia’s cookbook just took up space on our bookshelf. 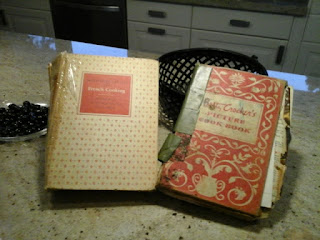 Many years later, as an adult with my very first home, when I was visiting my mother she asked me if I would like to have the cookbook.  I did want it – not because of the recipes, but because it was a reminder of my Uncle Mike, who had passed away the year before.

I, too, had learned to cook by the sides of my mother and my two grandmothers – one Italian and one Polish.  I didn’t need to look at a recipe to pull together pasta, meatballs, cabbage rolls, pasta e fagioli, perogie and a host of other basic dishes that were part of my cultural heritage.

At home I curled up with the book.  I started with the forward, and browsed through everything from appetizers to dessert.  I had entered a world totally foreign and so sophisticated to me.  Boeuf Bourginion?  Quiche? Onions Glaces a Blanc?  Cassoulet?  In Sault Ste. Marie in the seventies I’m sure that nobody cooked things like that – or if they did, they sure as hell didn’t call it by those names.

But I was willing to try a few of these recipes, and I learned that I needed them.  As my husband’s career burgeoned it was part of learning how to become a corporate wife (I gag whenever that term passes through my mind).  When entertaining his business colleagues, I’d go to Julia to figure out what to put on the table. She never failed me, and as my culinary confidence increased, I learned that I could get away with using Knorr bouillion cubes instead of braising veal knuckles, that I could skip steps without losing flavour, and that a quarter pound of butter in a recipe is just as good as half a pound.

In 2009, Meryl Streep, a versatile actor whom I think is unparalleled in this day and age, played Julia Child in a movie called Julie and Julia.  Julie sets herself on a mission to create all of Julia’s menus from the beginning of this cookbook to the end.  Throughout the movie I kept leaning over to my friend and saying “I’ve made that!”

One day, only a couple of years ago, a close friend dropped by while I was prepping one of Julia’s recipes.  She picked up the cookbook which was sitting on the counter and said, “Do you realize that you have a first edition? You’d better leave this to someone in your will – it’s worth thousands of dollars!”

Or maybe it’s not; my favourite book is well loved, much used and much damaged from wear and tear. Stains abound, and sometimes there are pages that I have to gently pry apart because food has stuck them together. Every time I use the book I remember Uncle Mike’s well-meaning intentions, my mother’s inability to even comprehend creating some of these recipes, and the joy that I experience when I open this book, because it means that I will be pleasing people I care about. I have my mother’s Betty Crocker cook book as well, but I’ve never cracked open the pages.

Who needs Betty when you have Julia? 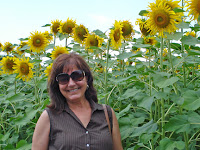 Deb Perris’s pleasure in life comes from the people in her life: there are ones who have been there forever, those who have been loved and are now gone, those who enter and re-enter time and time again, and those who enter once never to be seen again. She loves telling stories about these people, and how they impact on her life. Now she’s learning to write these stories – without an executive summary!