“Rhodi the Toady” by Sharlene Arnold 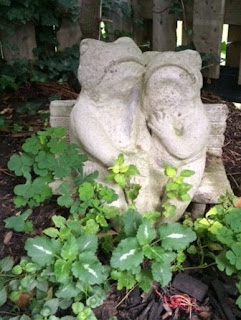 I met Rhodi many years ago, back when life was easy, just jumping around the ole’ swimming hole having fun. There were lots of us back then, carefree, casual and careless. Our newly formed legs gave us power and kept us hopping. We breathed in the summer water, our skin soaking up the warmth of the pond, the fresh green smell of the lily pads filling our developing lungs. I spotted Rhodi right from the start sitting on a toadstool shaped like a tulip.
He was different.
His rough skin had bumps on them, so unlike my own smooth covering that was shiny and moist. It wasn’t unattractive to me though. On the contrary. I liked to watch him sit on his haunches, then show off his short well muscled legs as he walked to the edge of the pond. Even then he was more grounded than I was. My high leaps dazzled as I leaped from the pad, showing off my long legs and acrobatic skills.  My eyes swirled in all directions, scouting out looks of admiration, but always came back to rest on Rhodi. I could see him watching me, so focused and intent, his eyes shaped like the football that lay forgotten in the shallow water.
The courting phase was just like the song we heard coming from the farmhouse close by- the tune drifting through the summer air like whispers of love. He wasn’t a frog and didn’t have a pistol by his side, nonetheless, he was a prince among toads who came a courtin’. He took me to sit in the dampness under the shady oak tree. That long tongue of his flicked out to catch a passing fly, then deftly slipped it into my waiting mouth. His mastery impressed me., especially for one so young. Yes, he was one hunk of a toad.
The day finally came when he tried to get down on one knee as he croaked, “Miss Froggy, will you marry me?”
“You can call me Franny,” I said, slipping my arms around his thick bumpy neck. And the adventures began.
We left the ole swimming hole, setting up house in an up and coming part of town in a newly built subdivision. Not needing a lot of room, we settled on a patch of grass boarded with bright red geraniums and striped green and white hostas that provided shade and coolness in the summer heat. A bonus water feature kept us moist, the stream of liquid running over our adult skin, so refreshing after a day, of exploring. Nights were spent cuddled up under the magnolia tree with it’s blossoms falling in waves of love around us.
Rhodi, sensing my restless spirit, planned vacations even though it went against his homebody nature. My considerate mate settled me in the cargo section between a red suitcase and a small cage containing a bluebird that serenaded us for most of the flight. With arms wrapped tight we flew to far- away places, hearing languages we didn’t understand. It didn’t matter for we croaked away in a language all our own. We discovered the language of love is universal. After having our first schnapps in Germany at a small town on the winding Rhine we swayed back to our lodgings. We had heard that Germans could be stiff and somewhat cold, but there on the dirt path a lone sole befriended us.
In a thick English accent, he warned us about the power of drink, especially homemade concoctions like the peach liqueur sold in local restaurants. It was too late. Rhodi, with his thickened body absorbed the newly discovered brew like the trooper he was, but for the first time in my life my trim form proved to be a detriment. The next morning, as Rhodi waved breakfast under my shrinking nostrils, I hopped to a nearby bush and spewed out my memories of the night before.
Our dissimilar eyes really popped open in Holland. As we toured the red-light district in Amsterdam, women in all shapes, sizes and colour, flaunted their wares. Rhodi found it impossible not to stare at the bouncing breasts and scantily clad females that jiggled behind the glass walls. I wasn’t threatened. Rhodi only had bug-eyes for me.
The fumes of the brown cafes seeped into our squatty heads. Music blaring out from every street corner pounded our fragile skulls. We hopped back to our night space, grateful for the experience but happy to have peace once again. Rhodi surrounded my body with red tulips and tempted me with Gouda.
Did we like France? Oh la-la. The wide avenue of the linden-laden Champs Elysee displayed designer labels that set my small heart pounding. The petite French women, surrounded by the scent of Chanel, strolled the streets, their arms laden with bags of scarves and baguettes. At the   famed Arc de Triumph we listened to the tour guide relate the story of Napoleon. History was never a strong point for either of us and we lapped up the lesson with gaping mouths, almost hearing the champagne bubbles burst in the romantic air.
Under the table that night at dinner we listened to the waiter ask, “Est-ce que vous avez choisir?”   The specialty was frog’s legs swimming in melted butter, he said. Our normally droopy lips sagged even more as they gaped open in horror.  We did choose - to make a hasty exit over the wooden floors and out the open door.
Our days of travel lessened. The last trip to Switzerland took us on the cog-train, the wheels chugging up the steep slope of the Alps, the snow white hair of the Grand Dame tumbling down her sides. Rhodi’s once strong back legs pulsed with arthritis. My eyes clouded over like the mist covering the mountains. The sound of the Alpenhorn bid us Auf Weidersehen.
Life was good back in Canada. Our little tadpoles, the miracle polys, grew up all too quickly getting their land-legs and swimming away one by one. They played in the same pond that Rhodi and I once did, testing the waters on each lily-pad. Adventure called and they hopped the coup.
So here we sit in our retirement covered by the branches of the old magnolia tree.  Our arms are tightly wrapped around each other and I feel his bumps worn down with age. Last Valentine’s Day Rhodi surprised me with a gift. In the dirt right in front of our bench where we spend the days he had written his final words of love, “Rhodi the Toady loves Franny the Frog.” We have become one with the white pitted stone upon which we sit, and one with each other. He croaked just before me.

Sharlene Walker-Arnold lives in Burlington. Her years of living in Europe have given her the settings and ideas to use in her short stories. She’s been previously published in Chicken Soup for the Soul, the Globe &Mail (here), has a first place winner piece coming out in Screamin Mamas Valentine's issue, plus her first story in a travel magazine Cargo Literary.