“I grow old, I grow old, but I shall not wear the bottoms of my trousers rolled,” if T. S. Eliot will forgive the reference.
At my last check-up, my family doctor looked at my height measurement and said, “I think you’re shorter than two years ago.”
“I kind of noticed that too,” I replied. “The other day my trousers seemed long and I had to take the bottoms up afterwards. It would be awkward to roll them up.”
My doctor did not seem to recognize my poetic reference and, without smiling, went on to suggest a bone density scan and the inclusion of glucosamine supplement in my diet. For my part, I was eager to reassure her that I was keeping up with my weight training and I was fine with following her advice. Not a big deal.
But it seems, for some, growing older is a big deal.
I recently read Globe and Mail feature writer Ian Brown’s book Sixty: A Diary of My Sixty-First and it upset me.  His self-effacing entries about the changes he noticed did not come across as humour, but bitter grumpiness. The shape of his nose is apparently changing and his sexual prowess is fading. Really? Is this aging’s worst threat? What’s wrong with growing old? And his nose changing shape? Oh vanity, vanity! I want to tell Mr. Brown that growing old isn’t a disaster.
When I turned fifty, I said to myself: “This is the beginning of life.” In the ten years between my fiftieth and sixtieth birthday, I looked around and discovered many new ventures to enrich myself.
I transformed myself from a couch potato into a power walker. I joined a walking class and, with coaching and peer support, I progressed step by step from not being able to walk fast for one minute to entering races. I even completed a marathon, walking the entire distance
This is not to say I am oblivious to the changes in my body and my performance. I never entered a race before I was fifty, but I can well imagine that twenty years ago I would have raced faster. Even so, does it matter? I am doing what I can, and I am at peace with myself. No regrets!
When I turned sixty, I felt good. In fact, I felt great.  I reassured myself, “Sixty is the new forty.”  I took up creative writing while I continued to work part time. I did not feel that I had reached a watershed at sixty.

For a while, I experimented with blogging and wrote about my love for hiking. To make the blog more interesting, I began taking snapshots with my cell phone and added photo inserts to illustrate my posts. I discovered the many motives behind blogging and how many bloggers gravitate towards socializing on blog sites. Blogging opened the door to a new dimension of social interaction with strangers, of which I was generally more wary. I am never an extravert in real life; it turns out I don’t like mindless chatter in the cyber world, either.
Another milestone birthday arrived recently, the one that delivers discounts in shops, restaurants, museums and public transport. Still, getting older hasn’t bothered me.
Why should growing old be depressing, as Brown sees it?
I look at my mother, who, at eighty-nine, is my inspiration to keep up with technology. She checks her email every day. and through her siblings who are scattered across the globe, she is in touch with the whole world it seems. I’ve installed WhatsApp, which she enjoys using to communicate with her children in both English and Chinese on her iPad. She is fluent with Emoji!
My mother embraces life and has something to look forward to every day. She never moans about her knee problems. She puts some ointment on her knees in the morning, and starts her day with a Tai Chi routine, following along with a DVD demonstration. She cannot bend as low as the instructor. She cannot raise her hands above her head. Who cares?
As we age, we are not immune to the usual physical changes, let alone any hereditary conditions. Indeed, I have at least ten health-related appointments every year, covering various organs and bodily systems. I do not complain; I like being able to discuss my changing body with a knowledgeable person so I can make decisions on how to take care of myself.
It’s not that I’m oblivious to my mortality, but I have decided not to loathe my physical body and live life as it is. To me, a disillusioned soul is more frightening than an aging body, and it’s futile to encase a hopeless spirit in a young-looking shell. It is only when we decide to continue to be ourselves and embrace the age-appropriate changes in our bodies that we have peace of mind.
The West has bred a culture of ageism and an inability to accept the natural changes that take place in our lifespan. Too many people cling to their younger selves, afraid to flow with time and nature. This is an arrested mentality. I hope Mr. Brown will emerge from gazing into his wrinkling navel to cherish the joy that life promises him, by being who he is. I certainly wish that he has a happier 63rd birthday. 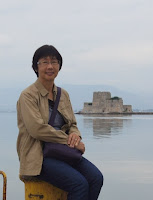 Mona Tam lives in Burlington, Ontario. She has a doctorate in Psychology and has work as a mental health professional until her recent retirement. She has lived in Hong Kong and England and is interested in including cultural issues in some of her writings.