When you move to the tenth floor of a Condo with picture windows, the perspective changes.

Children in bright winter clothes play in the snow-covered schoolyard like a picture by Norman Rockwell, prompting thoughts of the kinder world he wanted us to see. In summer, the sports field next to the school is rarely empty. Youngsters play football, soccer and rugby. From up here you can soon tell a team that has a strategy from those who simply chase around in a pack after the ball.

But these ground level distractions don’t match the daily wintertime show up in the air.
Today the sky is clear as could be, a cold blue. It’s around 4 pm, their usual time, and sure enough, above the tree line miles to the North, here they come. They’re barely discernible at first, like threads of long dark hair borne on the breeze.

They’re champion flyers and fast, so it’s not long before each thread resolves into an undulating skein of  specks, flights of Canada Geese heading down from the cornfields to roost overnight by the lake. They fly in echelon formation, and so disciplined, each bird keeping station to the side and aft of the one ahead.

More lines, and still more, show themselves, at least thirty geese in every one, and that one over there, it’s huge!

As a child reared in the nineteen-forties on stories of recent war, for a moment I’m picturing wave upon wave of enemy planes boring in from the English Channel, but there’s no threat here, far from it.

Yet there is a sense of purpose. These graceful birds are headed our way with resolve, heads thrust forward, their course unwavering.

Here comes the first flight, sailing overhead with strong, steady wing beats. Now here’s another, lower this time, sweeping right by at our eye-level, granting us a front row seat at the airshow.

For minutes we watch, my wife and I, captivated by the sight as line upon line, hundreds of birds, materialize in the distance, approach and pass out of our sight. What is it about this that lifts our hearts? It’s a spectacle of course, but there is also a sense that we are witnessing something more. While it’s a daily routine to the geese, uncomplicated beings as they may be, these birds are following a ritual that their ancestors must have performed for untold years.

It’s not all grace and dignity, though. Another day we get a smile from the geese. The baseball diamond is a favourite spot for goose daytime parking. They avoid the Astroturf on the football field and favour the real grass on the diamond. It gets crowded, and today it’s really tight. Here comes a gaggle of ten or so, circling uncertainly. Is there space or not? They circle again. Maybe they have a rookie flight leader, this year’s newbie? They disappear behind our building but now they’re back again. Two peel off and head east towards the lakeside park, they’ve had enough of this nonsense.

The rest try another pass above the diamond and the leader decides to go for it. Down they drop and, with a lot of flapping to lose speed, make undignified landings among the unwelcoming crowd who got here first. There are spats of neck-lowering and pecking, but eventually things quiet down and the flight settles in among their compadres.

Flight, a word that tugs at many of us, each in different ways with a diversity of memories and images.

Flight. My first time at the controls of a glider. No sensation of speed. Rather, a peaceful panorama through the windshield, fields and hedgerows pivoting below. Quiet elation as the air under our wings, so insubstantial to a hand’s gesture, assumes the buoyancy and heft of a surfer’s wave. As I gently ease the control stick sideways, the instructor exclaims, “By Jove, I like the way you turn!” And that was because of another memory, a memory of high, windswept places.

Flight. When you launch a radio-controlled model glider off the crest of a ridge into the wind - rudder control only, anything more costs too much on a schoolboy’s pocket money - you commit to facing the elements. It’s a dialogue between you and the boisterous air climbing the hillside. Turn now, quick, or your precious plane will be swept back over your head and be lost. Turn the other way and it comes whistling by, only feet away, to whoops from enthusiastic spectators.

And that’s where I learned how to turn a glider.

The Condo balcony is another high, windy place, too cold in winter though, and we’ll observe the geese from the kinder temperatures indoors. It’s morning, and in groups of half a dozen at first, but then forming those mesmerizing lines, they get organized and head north, back to the cornfields. We’ll watch for them again tonight.

***
Note:  Quick Brown Fox always welcomes essays about a favourite book or about your experience of reading or writing – and other essays, too. Read a few essays on the blog to get a taste of what other writers have done (see here and scroll down).
QBF also welcomes your book reviews – or any kind of review of anything, anywhere or anybody. If you want to review your favourite coffee shops or libraries, babysitters or lovers (no real names please), go for it. See examples of book reviews here (and scroll down); other reviews here (and scroll down).
Submit to: brianhenry@sympatico.ca
Include a short bio at the end of your piece and attach a photo of yourself if you have one that’s okay. 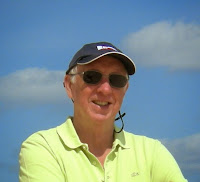 Dave Moores started writing fiction “to see if I could” following a decision to finally retire from the workforce at age 71. Writing in turn is becoming a full-time job and Dave has his first novel, Windward Legs, set in the sailing community in Ontario’s Golden Horseshoe Region where he races his own sailboat and lives with his wife Chris.