"The Garter Belt," a true story by Patricia Howard 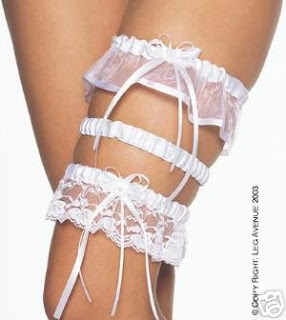 In 1978 I arrived in East Berlin on a posting with the British Embassy. It was a time of considerable tension between East and West, before the fall of the Berlin Wall, and while I lived and worked in the East, I was able to move freely to the west of the City.

At the time I was a rather unworldly single twenty-something who was not only new to living overseas in this considerably hostile environment of the day, but also new to living on my own.

My few possessions were still en route by road through the Berlin corridor, the highly policed road between West Germany and East and West Berlin. So, one sunny Saturday, with nothing to do in a virtually empty apartment, I decided to head through the check point, to the heart of the West Berlin shopping district.

Passing through Checkpoint Charlie and into the centre of West Berlin were the delights of the Ku’dam, as the Kurfurstendam was known locally. The Ku’dam was the Mayfair of West Berlin’s shopping district. This street was lined with huge department stores and fashion boutiques interspersed with cafes where ladies did lunch or drank bitter coffee with a bowl of whipped cream on the side. It was frequented by the ultra-chic and ultra-wealthy living in the highly commercialized and democratic western half of Berlin. 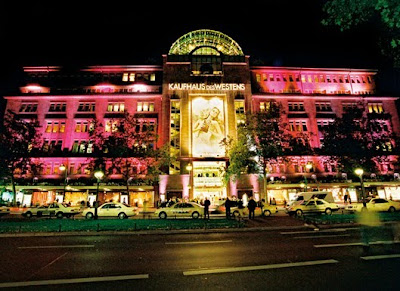 These people seemed to disregard the fact that their bubble of democracy was totally surrounded by the hostile, communist East Bloc while they shopped for anything that money could buy. The jewel in the crown of the Ku’dam was undoubtedly KaDeWe, the Harrods of West Berlin, a multi-storied department store that surely housed anything that anyone would want, and had the money to pay for.

Round and round the store I went, exploring the delights of the various bars in the food hall serving every kind of delicacy from lobster and caviar to the cheeses of the world. From there to the fashion departments with dresses that would take me a year’s salary to pay for; to jewellery and leather goods: everything sparkled and gleamed while the frenetic pace of the shoppers seemed more atuned to the fact that the store closed earlier on a Saturday and they had a limited time to spend their Deutschemarks.

In due course I found myself in the lingerie department. Berlin has a very exotic side to its night life and this was clearly reflected in some of the underwear beautifully and artistically displayed there. I noticed a gentleman waiting in a comfortable armchair while his wife entered the changing room with a sales assistant who was to help the wife to pour her corpulent pounds into a girdle. I wandered around, gazing at all these delightful undies that not only would I never wear but would probably stretch my limited imagination about how to wear, let alone ever be able to afford to buy.

I picked up a garter belt, its dainty hooks dangling enticingly from mere threads of lace – and then it happened. I was pounced upon by a middle-aged sales assistant who obviously thought me a potential customer. She chattered away in rapid-fire German, of which I caught perhaps one word in ten…. Something about lace and very chic and ‘just my size’…

Still talking without pause, this very brusque, no nonsense lady then proceeded to whisk the garter belt from its hanger and fastened it around my waist to see if it would fit. Still talking, she took my arm and marched me over to the gentleman waiting in the armchair for his wife to try on her girdle, obviously not understanding that he and I were total strangers. I was mortified as she began to explain the neatness of the fit to this gentleman. He smiled broadly and clearly thought that garter belts were more interesting apparel than girdles, as he nodded enthusiastically at everything the sales assistant was telling him. Oh dear – how to get out of this predicament!

I finally managed to cut into the conversation and said in very halting German, doubtless made even more unintelligible by my flustered state, that I really didn’t like this garter belt swinging on the outside of my skirt, and that I didn’t want it. So, clearly disappointed, the sales lady turned me around to unhook the offending piece, aware at this point that she would make no commission out of me today.

I stood as still as possible while she fumbled with the hooks behind my back. I was mortified, standing in the middle of a very sophisticated department store, while people looked on in amusement and I blushed scarlet. Still the lady was unable to get the wretched thing off. She began to mutter. I did not know much German but I certainly knew she was not pleased at this clear waste of her time. She pulled it, she stretched it, she tried to pull the garter belt over my hips, then over my head, but clearly it was not going to budge. I was frozen to the spot while trickles of perspiration ran down my spine at the sheer embarrassment of this whole fiasco.

After several minutes of tugging and muttering, the sales assistant gave up. With some annoyance, she took me by the arm and again marched me through the racks of enticing silk and lace unmentionables, this time to the men’s department. At the sales desk, she asked in a rather loud voice for the use of a pair of scissors. I was rooted to the spot, suddenly panicking about her intentions. Every instinct urged me to run, to get away from all the stares and titters of amusement of the men lining up there waiting to pay for their purchases. A pair of scissors was procured with a flourish and the offending garter belt was unceremoniously cut away. The sales assistant glared as I thanked her and tried as nonchalantly as possible to leave, my cheeks aglow with embarrassment.

I vowed to henceforth always wear pantyhose instead of stockings. I also vowed never to enter a lingerie department again unless I had enough German vocabulary to defend myself. 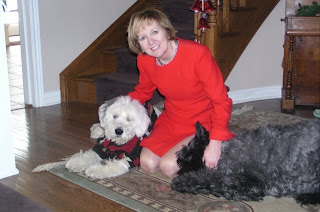 Patricia Howard is fairly new to the writing game, and has been greatly encouraged in her endeavours by Brian Henry’s courses. She writes humorous short stories based on her life’s experiences while living and working in various countries around the world.
Patricia now lives in Burlington with her husband Richard and her menagerie of dogs, cats and tropical fish. On 17, she gave a reading of The Garter Belt at CJ’s Café. You can read another of Patricia’s stories here.

For information about Brian Henry's writing workshops and creative writing courses, see here.
Posted by Brian Henry at 9:01 AM