“The Birthday Party” by Randi Evans 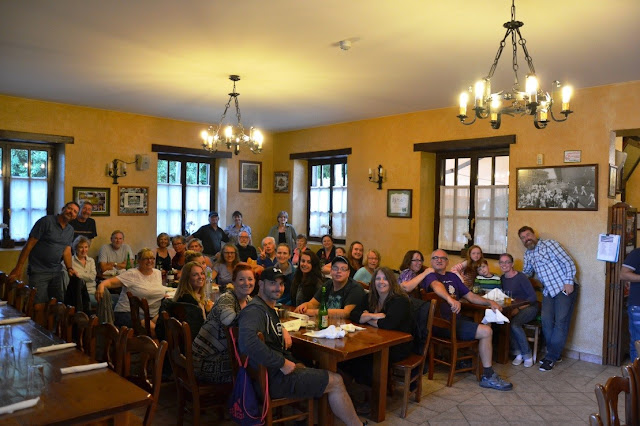 I had felt her presence for a while, but I didn’t hear her voice until the day of my retirement party.  She whispered, “So, how long do you think we have left?”

I managed to subdue her for 4 years, as I volunteered at my granddaughter’s school, revived my garden, and read through the stack of books that had been patiently waiting. My husband, Bill, took a retirement job in the wine industry and spent his spare time at the golf course or squash court.  I had tried to like golf, but to me it was just a workshop in creative profanity. We did, however, agree on one pastime. Travel. We had visited every continent except Antarctica at least twice, in an effort to ensure that our children would never be burdened with having to manage too much money.

It was as Bill and I approached our 70th years, she returned, roaming uneasily through my body. Again she asked, “So, how long do you think we have left?” I clamped my hand firmly over her mouth. 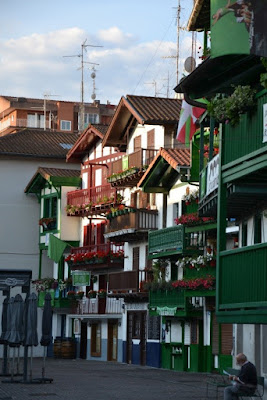 Bill and I were not into big celebrations, but I decided it would be easier to silence her if I was busy planning something special for our 70th year.  There was no question that travel would be involved, and choosing the country was easy.  Spain had called us back repeatedly since our first trip there in 1973, and we both wanted to explore more of the north coast.

We made our celebration a command performance for our three children and their families.  They didn’t object.  On a lark, we sent out feelers to other well-travelled family and friends to see if there was any interest in joining us.  Some jumped on board by return email. Others signed on over the next few months. Thirty-five people later we realized were going to have a birthday party in Spain.

Now, to nail down the exact location.  We wanted our guests to have a genuine Spanish experience - sun, sea, timeworn streets, fortress walls, Spanish omelets and ham, the best coffee in the world, and that unique brand of Spanish energy.  We needed a village big enough to accommodate tourists but not so popular that foreigners had corrupted their lifestyle.  I had been making most of our travel arrangements, but now I had to satisfy thirty-five people from age seven to eighty.

Reality set in. I had committed to planning a party. A Big Party. In Spain. From Canada. In Spanish. What the hell was I thinking?

After a particularly sleepless night I emailed friends in Barcelona who did some brain-storming and came back to us with Hondarribia, a Basque village on the north coast near San Sebastian. It had 3 distinct districts – narrow, winding streets leading up through a walled village; the seaside with marina, sandy beaches and boardwalk; and what we affectionately called “Party Street”, where wine flowed and tapas magically appeared on little stand-up tables in the middle of a cobblestone walkway lined on one side with bars and the other with colourfully painted homes and businesses. Perfect.  We knew where we were going. 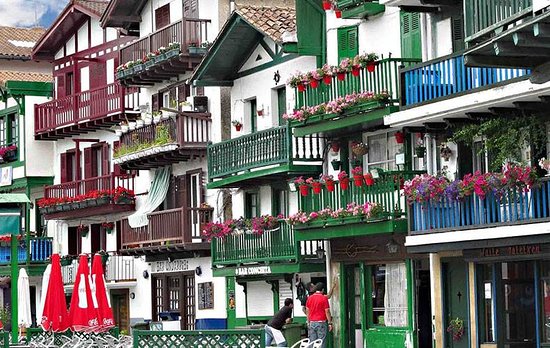 Now the details.  I found an apartment on the 3rd and 4th floors of a building on the water. It had six bedrooms for the eleven immediate family members, a playroom for the kids and a large common area with a balcony overlooking the busy promenade and across the Bidasoa River into France. Having learned my lesson about DIY, I immediately sought a small travel agent in Hondarribia to help with tours. This remarkable woman, Txaro, had spent her school years in New York State, so her English was perfect.  She was intrigued by a group of crazy Canadians coming to Spain to have a birthday party and made it her mission to ensure our celebration would be one we would remember.

With air booked, accommodations and tours settled, we had a few months to relax. That’s when I heard it again – that disturbing question.  “So, how long do you think we have left?” I upgraded our seats to business class.  That shut her up.

Bill and I flew into Spain a week early with our younger daughter and her fiancé (they in economy class).  We had to tweak the details and put together welcome kits - maps, schedules and of course, a bottle of local wine all nestled into a Spanish souvenir bag.  A few days later, our older daughter, our son and their families arrived.  Then the rest of the group began trickling in.

Txaro introduced Hondarribia with a walking tour through the walled village, noting, not only the rich history, but also where the town scenes from Papillon had been filmed. The following day we were happy to see our guests split into new friendship units to spend their free day hiking the hills leading to the Bay of Biscay, exploring vibrant San Sebastien or hanging out in the local bars. 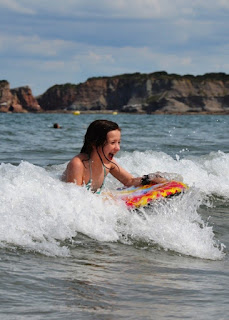 We rented a bus for two days, with the first to be spent in France.  It started by dragging our grandson from the playroom wailing, “but there are no toys in France!” He perked up when he learned he would get to explore a real neo-gothic castle and was totally appeased after choosing his lunch from the fresh fruit, specialty meats and pastries in the open air market.

The driver dropped us off on the beach for the afternoon, and we made our way back to Hondarribia via the 10 minute ferry across the Bidasoa.

We spent the next day in the Spanish countryside, learning of the strong Roman influence, donning helmets that perched uselessly on top of the oversized Evans’ heads to tour an iron mine and sampling Txakoli, the signature dry, slightly spritzy wine of the region. We lunched at a Cider House serving the largest portions of the bloodiest meat we had ever seen outside a butcher shop. We ended the day winding down the hills past vineyards and farms as the sun set on the Bay of Biscay.

The only surprise was the bus driver. He was bilingual as promised, but his languages were Basque and Spanish. The inconvenience was surpassed by the hilarity of our broken Spanish and pantomimed conversations.

The Birthday dinner was intended to be the high point of the week.  While it was a fun five hour stuff-and-drink-yourself-silly event, the best parts of the week were the other evenings.  Our apartment had an open door policy. Guests started arriving around 5:00 with food and wine.  The cooks among us crowded into the tiny kitchen to see what we could concoct. Not surprisingly in Evansland, a contest evolved – who could buy the cheapest drinkable bottle of wine. Bill judged the winner to be a 1.5 Euro, 1.5 liter bottle of Garnacha, which was better than some of the more “expensive” (2 Euro) bottles. 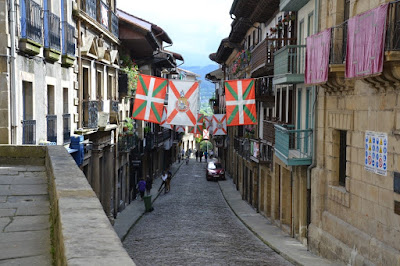 The evenings ended with very loud singalongs accompanied by our son and our daughter’s fiancé on their guitars.  Those with a Welsh background carried the tune while the rest of us mouthed the words. I was sure that we were going to be evicted. However, when the seniors tottered to their beds and the younger crowd headed to Party Street around 11:00, we could hear the revelry coming from outside and realized that the locals were just getting started.  Spaniards know how to party.

On the last evening our three children roasted us with original lyrics to “Homeward Bound”. Instead of extoling the virtues of their wonderful parents, they divulged how much I worried, how much Bill slept, and how they wished we were indeed “homeward bound” instead of squandering their inheritance. I had prepared a slide show of our 70 years, accompanied by our favourite music - from 1940’s songs my mother sang to me to Lady Gaga.  Our older daughter, the comedian, made a heartwarming speech, thanking me for saving her time in planning our funerals.

Our guests trickled out just as they had trickled in.  Bill and I stayed in northwest Spain another two weeks to unwind. I wouldn’t want to take on that kind of project again, but I don’t regret an iota of the time, effort and expense. The bonus? I hadn’t heard her voice in a full month.

In the 5 years following our party, she has become more active.  She jabs her toe under my kneecap. She pings my sciatic nerve with her nails. She swooshes through my inner ear until I am off balance.  She whispers. She murmurs. She sighs. But now, when she asks ,“So, how long do you think we have left?” I tell her, “Just leave me alone.  I’m busy.” 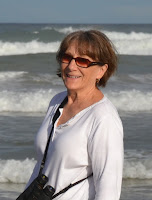 Randi Evans enjoys travelling, gardening, classroom volunteering and being a grandma. She has always enjoyed writing, but found little time to do more than edit the company newsletter and write the occasional article. In retirement, Randi has written a few stories for her young grandchildren and is now experimenting with other genres, starting with memoires. Randi lives in St. Catharines, Ontario, with her husband, Bill.