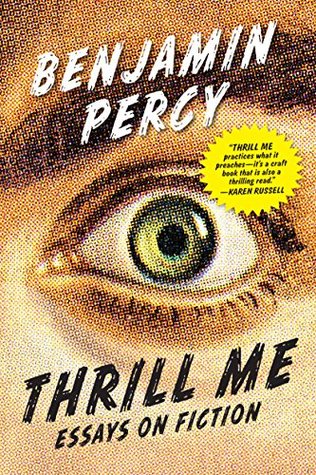 The Forest for the Trees: An Editor’s Advice to Writers, Betsy Lerner, 2010, Riverhead Books, New York. Available from Indigo here.

Back on June 13, 2020, Quick Brown Fox published my review of Stephen King’s On Writing. In that review I said that I had heard on a podcast never to read a book about writing by an author you’d never heard of. It seemed reasonable. However, I'd barely begun learning the craft of writing. With hindsight being 20/20, I was naïve to be agreeing with such a presumptuous statement. I can imagine my creative writing instructor smirking as he thought how I would, in time, come to rue those words.

Most of the books I have read on the craft of writing since then have been inspirational or nuts and bolts how-to. Thrill Me: Essays on Fiction by Benjamin Percy dabbles in both areas. Percy's first essay is biographical, highlighting his journey towards becoming a writer. He grew up binging on genre writers and lived for sci-fi and fantasy until he discovered literary fiction in college. Of his own personal inspirations, he cites King and Ray Bradbury among others. My review of Bradbury’s Zen in the Art of Writing is here. Percy is a voracious reader and mentions so many authors and titles (both genre and literary) that I wonder when he has time to write his own material.

Over the next several essays he discusses plot, using backstory (don’t need it), and creating urgency and suspense. He references specific works, and then breaks it down easily to reveal the writing element. In one essay he mentions that he could have used the movie Jaws to explain the entire craft of storytelling, “Books and movies share many characteristics, but because film structure is usually tidier, the screen is sometimes easier to study,” Percy states. His essays are eager yet informative, thrilling the reader to pick up their storytelling tools. 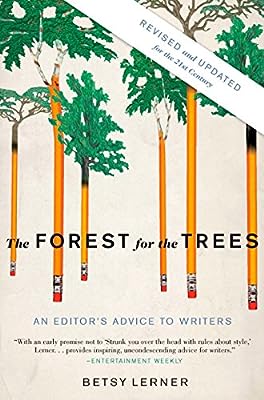 When Betsy Lerner finished her English degree, she had a vague idea about graduate school and an even vaguer idea about working. However, she’d left her grad school application too late and so ventured out into the workforce, beginning her 30-year publishing career. Along the way, she got her MFA.

Her book, The Forest for the Trees: An Editor’s Advice to Writers is not about the craft of writing (“Nor will I Strunk you over the head with rules about style”); instead it’s about living the writer’s life and how manuscripts progress from a blank piece of paper to a published book.

Lerner divides her book into two parts: Part I Writing, is about the personality and psychology of writers, and Part II Publishing, pulls back the curtain of the publishing world.

In Part I, Lerner defines six categories of writers: ambivalent, natural, wicked child, self-promoter, neurotic and touching fire. It’s based on her decades-long association with writers in various capacities (editor, author, agent) and leaves the reader trying to decide which category is relevant. Maybe it's a bit of all of them. With many fascinating anecdotes, the reader will find some insights into what drives them as a writer and hopefully some motivations on how to be a better writer.

Part II begins with obtaining an agent, dealing with rejection, and then the practical aspects of what happens once you’ve signed a contract to sell your book. Updated and revised in 2010, Lerner includes some information about social media but in our fast-paced culture and increased indie publishing. Some of this is out of date. For those seeking traditional publishing, The Forest for the Trees will be an uplifting and exhilarating read. Seeing behind the scenes of the publishing world was incentive enough to get my creative juices flowing.

Reconsidering the advice never to read a book about writing by an author you’ve never heard of, I’d say, learn from those who’ve already accomplished what you want to achieve. In my case, that’s a published author. From there, I’ll take the advice that works for me and leave the rest behind. 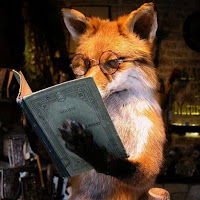 Looking for books? There’s a great bookstore near you. For starters, see here.