Canada is such a wonderfully successful country that our politics are increasingly about vanity; that is, the important business of admiring oneself in the mirror and making easy gestures. The practical business of running the country can be left to the civil service.

Yes, with the pandemic, the government had to turn its attention to shovelling billions upon billions out the door. But for most politicians the pandemic seems to have been an annoying commercial break. To the public, maybe not so much.

This is not entirely new. Canada has long had a vanity party. A vote for the NDP has always been a vote for one’s mirror reflection, unsullied by fear that one’s beautiful policies might be put into practice. Mostly. Because there was always the dream of a breakthrough and often a realistic prospect of holding the balance of power. The same can’t be said for our newest national parties.

Perhaps the less said about the PPC, the better. The party came to be so that Maxime Bernier could look in the mirror and ask who is the most beautiful fiscal conservative of them all.

The Greens have even less support. Yes, they serve the function of tolling our environmental doom, but we already pay the CBC $1.2 billion a year to do that, so even as doomsayers, the Greens are redundant.

Not to mention that the environment is a vanity issue to start with. Yes, the science tells us the earth is getting warmer. The same science tells us Canada can do nothing about it. In 2005, Canada’s share of worldwide output of greenhouse gasses totalled 1.8% a year – a wholly insignificant number. Year by year, our share has fallen. Not because of our efforts, but because the rest of the world’s output of CO2 continues to rise.

“Well, at least we should do our part!” people say. But we cannot. To do our “part,” we have to be part of a larger effort that might succeed, and such a worldwide effort doesn’t exist. Global warming is a luxury issue, championed in the rich, post-industrial world. Ignored elsewhere. Is China reducing its CO2 emissions? Quite the opposite. Moreover, the Chinese government is financing new coal-fired generating stations throughout the third world.

In 2019, China's carbon emissions surpassed all OECD countries combined, including the EU and the US. "Canada's share of global emissions decreased from 1.8% in 2005 to 1.5% in 2018. Its share is anticipated to continue to decline with the expected rapid increase in emissions from developing and emerging countries, particularly China (+71.7%), India (+71.3%), Brazil (+16.2%) and Indonesia (+37.9%)," says Statistics Canada.

I feel the attraction of the environmental movement. People need a noble quest. And what could be nobler than saving the planet? But Canada’s ambition to slow down climate change is like a beaver getting out in front of a 20-ton earth mover.

The result has not been pretty. Yes, safely at home in Ottawa or Montreal, Toronto or Vancouver, we may not have noticed the destruction of Alberta’s oil industry, (though sadly, I have heard more than one person gloating over the loss of jobs and hope).

More generally, those of us who make a comfortable living don’t feel the pinch of higher gas cost, higher electricity costs – higher everything costs it seems. Nor have many of us noticed that other people are feeling the pinch. How could we? You will not hear the CBC or The Toronto Star or the Globe and Mail reporting that a good income ensures that the pain of our noble quest is felt by someone else.

It’s also no coincidence that supporters of two of our vanity parties have an unhealthy obsession with Israel. Does the Israeli-Palestinian conflict matter in any material way to Canada? Maybe, if we consider that Hamas’s and Hezbollah’s attacks against Israel are part of Iran’s efforts to dominate the middle east. That is a large conflict brewing, engaging every state in the region. Foreign policy mavens throughout the world are watching that. But the media is not.

Our media and our politicians are focussed entirely on the little conflict, the on-going effort of the Palestinians to replace Israel with a Palestinian state. On the scale of serious conflicts in the world, that has to come in somewhere around 127½th. It matters if you’re Israeli, or Jewish, or Palestinian. But to Canada?

Not at all. Yet activists in both the NDP and the Green Party preen their anti-Israel obsession before a mirror daily. It’s the hatred du jour.

The professionals running their election campaigns know how icky this obsession appears to many Canadians, so they keep it out of sight, but anyone paying attention will recall how popular anti-Israel resolutions were at the NDP convention. (See here and here.)

As for the Greens, earlier this year, they publicly melted down over Israel. The party leader Annamie Paul is a moderate. Like any sane person, she supports peace and Israel’s continuing existence; also, she’s Black and Jewish – all of which makes her an outlier in the Green Party. 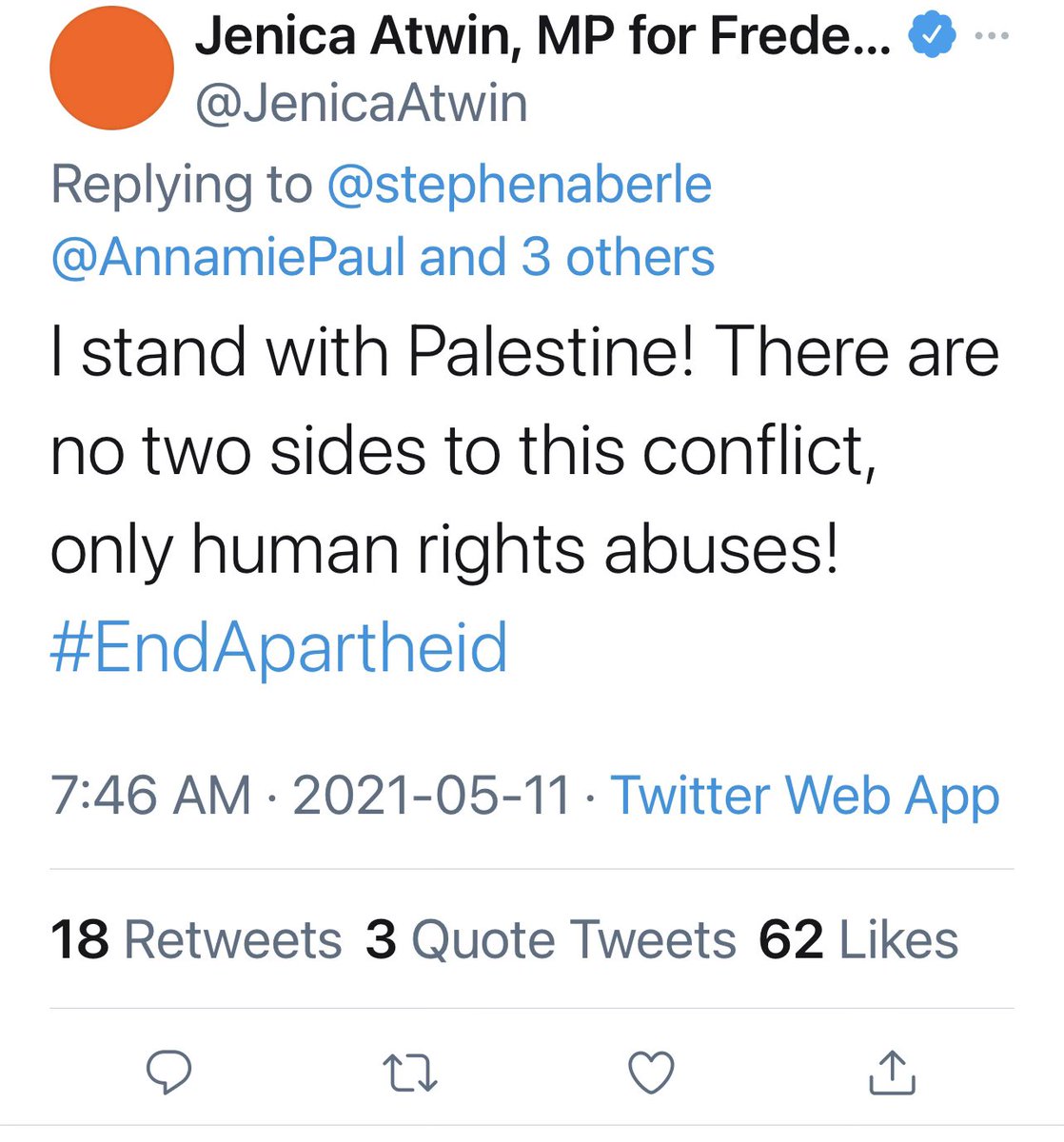 During Hamas’s most recent war against Israel, Green Party MP Jenica Atwin went ballistic when Annamie Paul made a mild statement about wishing for an end to the violence. Atwin tweeted: “I stand with Palestine! There are no two sides to this conflict, only human rights abuses! #EndApartheid.”

Then Atwin crossed over to the Liberals.

Atwin and other denizens of the left can afford the luxury of siding with terrorists because Canada is so wonderfully secure. If Hamas were firing thousands of missiles at Fredericton (which Atkin represents as an MP) her constituents would burn her at the stake.

Of course, vanity politics aren’t confined to our minor parties. For the past six years, we’ve been ruled by a government specializing in gestures and posturing – whose very signature is vanity.

In 2019, a national inquiry concluded that Canada was perpetrating a current, ongoing genocide against Indigenous peoples. Justin Trudeau accepted this conclusion.

To be sure, Canada faces no harder issue than the plight of our Indigenous peoples. But if Trudeau thinks Canada is currently committing genocide, why is he running for re-election? He should be turning himself in at the Hague for crimes against humanity.

It drives me crazy. If any issue in Canada requires seriousness, surely it is the Indigenous issue. But no. From Trudeau, we get empty words, empty gestures, and eternal preening.

I believe (and hope) Canadians are growing weary of vanity politics.

The Pandemic has shaken us.

Many Canadians are holding on by their fingernails, and many, many more are nervous. We’ve been reminded that we’re vulnerable. Some 60% of Canadians are worried about inflation (and that figure comes from before Stats Can's announcement on Wednesday that inflation has hit an 18-year high).

Obviously, inflation makes everything more expensive, erodes our savings, and raises the threat of higher interest rates. But also, we fear the re-emergence of inflation is an omen – a strong recovery isn’t guaranteed. Indeed, unlike other advanced economies, Canada’s recovery has been shaky. And with the country a trillion dollars in debt, how much of a backstop do we have left?

Even more than that, Covid – and the political response to Covid – has created societal discord unlike anything in recent memory. Some Canadians are anxious about the vaccine, worried about side effects and about vaccinating their children and they’re all the more anxious because they feel backed into a corner. But the rest of us are anxious, too – so the backlash against the vaccine doubters is too often anger and ridicule.

And anger has sparked more anger. Unbelievably, we even have a few hundred jerks protesting outside hospitals, harassing health care workers and patients. Thankfully, that’s a fringe phenomenon. The doubters, though, number in the millions, and sneering hasn’t convinced anyone.

From the start of the election, Trudeau has tried to build the anger. Everyone’s noticed his irresponsibility in calling an election during the pandemic – purely because he wanted a majority that he didn’t even need, as the NDP had pledged their support for the duration of the pandemic.

But beyond that, Trudeau has used the pandemic as a wedge issue. Politically, this has succeeded in giving Bernier’s People’s Party momentum as the one anti–vaccine passport party. The PPC has at least double the Green Party vote.

But it’s Trudeau’s intent that disturbs me: to use the pandemic to divide Canadian against Canadian so that he might possibly win a majority. It’s all about him.

Vanity politics is a luxury item, and right now, as a country, maybe we can’t afford it. Right now, it would be comforting to have a serious leader, concerned with actually getting things done and calming things down.

Brian Henry is a writer, editor, creative writing instructor, and publisher of the Quick Brown Fox blog. He’s written opinion pieces for the National Post and The Toronto Star. He was also a regular contributor to the (now defunct) Jewish Tribune and the Engage and Harry’s Place websites in the UK. This piece was previously published on TheJ.ca, the Canadian Jewish community's online journal of news and opinion.