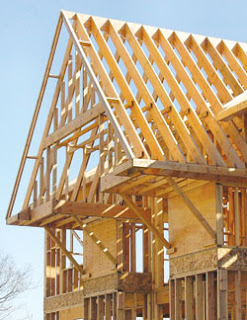 “C’mon, we’re ready to go.” There was excitement in my Dad’s voice.

At the end of March 1956, we were moving out of a small, two bedroom apartment, at the rear of a three story apartment block on Victoria Avenue South in Hamilton.

“Wait a minute. I’m not finished cleaning up,” said my mother.

The truck was loaded and Dad and Uncle Jack were getting antsy.

My mother never thought of herself as a meticulous housekeeper but like most women leaving a house clean was a matter of pride and she is determined that no one will say she left the now empty apartment dirty. She relentlessly chased dust bunnies that seemed to appear out of nowhere no matter how thoroughly she swept and vacuumed.

The move began several years earlier with quiet conversations my parents had in their living room after my brother and I were tucked into our bunk bed, believing we were asleep. The light from the setting sun was filtered through the bedroom window by the two big trees next door. The soft wafting of sound from their voices and drifting murmurs became indelibly etched in my memory. And although I was too young to register it as such, I felt the worry, the anxiety, and the frustration of living on a small income and, at times, the seeming futility of trying to build a better life.

“We’ve got to get out of this apartment? The kids are getting big.”

“Where will we get the down payment for a house?”

“…..Probably take us about two or three years to raise a thou….”

They sat at a flimsy, green card table used for week night meals. Later in the evening, I would hear the roll of strings of pearls across the table top. They put fasteners on them for a local factory to earn extra money.

My father’s fears included a possible lay off and the setback that would represent.

In time they joined a cooperative housing group organized through the Church. Through study, a pooling of resources and hard work they built their houses under the direction of contractors. After a full day’s work, my father drove to Grimsby, fifteen miles east of the city and worked on the houses with other men like himself, night after night until midnight. This went on for three years.

Now, the houses were ready to become homes. It was an important journey, from a tiny apartment to a house they would eventually own; a journey from one life to another, from a narrow, cramped outlook to expanding horizons.

My father had looked tired and gaunt for months but today he was full of energy, full of happiness that something he and my mother had set out to do was accomplished.

Looking back, I remember how he looked and how he was with particular poignancy. On that day no one could have known how little time he had left.

My mother and brother finally made their way to the front door.

“Come on, Ted. Time to go! Where is he? He’s probably off day dreaming somewhere.”

But I wasn’t daydreaming. I was taking one long, last look around.

Some people say that it’s a good thing to move on with life and never look back. But I did look back and still do. My earliest memories came from this small patch of earth. A gray clapboard garage with a sloping, flat, tar paper roof was the western boundary of the back yard that was grass and hollyhocks, peonies and at least a dozen children’s birthday parties most of them recorded with my mother’s Brownie Box Camera.

Next door was an architectural treasure, one of the first houses in Hamilton. It was a particular style called a “Tweed Cottage,” a one-floor plan with a slate roof built in 1833. 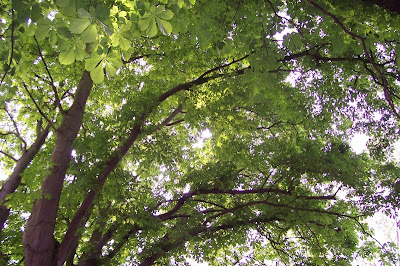 At the back of the Cottage property were two Chestnut trees that hung out over our back yard. Looking upwards, I saw the trees the way I always had, two leafy giants that formed a protective canopy over my childhood.
The trees are male and female, like two gargantuan parents, planted side by side, growing with their branches intertwined eighty feet over my head; their two root systems having long since become one, living to advanced old age. And everything beneath them thrived. It seemed the two of them had always been there; in my memory they will always be there, forever the boundary of earth and sky. Through them I first looked up at the stars. They were the solid, immovable hub of my universe.
In each season they took on an unforgettable beauty. In late May, clusters of white, candelabra-like blossoms soon gave rise to tiny yellowish green burrs among leaves spread like the palm of a hand.

In the dog days of summer they held great, green oases of coolness as a refuge from a day that was a furnace and on cool nights kept great caverns of warmth up under their branches.

Burgeoning ripeness and the changing winds of August and early September loosened prickly burs and sent them plummeting to the earth where the impact split the case in two, revealing in the white, pulpy, green smelling freshness, a shiny, brown treasure - a horse chestnut.

Soon the great palmate leaves turned golden and russet and then, in the wind and small, cold rains of approaching winter they fell, brittle and parchment-like, becoming part of the earth.

I heard my mother’s voice from behind. Tears were running down my cheeks and she bent over, kissed my wet face, put her arm around my shoulders and said softy,

Years later, I walked the alley behind the old apartment building to see what time had done. The old garage was gone. The Tweed Cottage had been demolished. The back yard had become an asphalt parking lot searing their root system on the south, covering the hollyhock garden, the boardwalk, and the rich earth of my childhood. One of the trees was gone but the one that blossomed grew on, still drawing life from its dead partner’s root system.

No one took photos of them but I still see the trees of my life, stark against the leaden skies of winter, the bare and black, snow dusted network of what look like dead branches as they reached to the sky with spear shaped buds at their tips, each held a promise within, each declared – life will begin again. 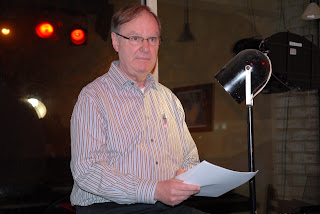 Ted Wolfe is an emerging writer who is currently writing a novel called “Class Action.” which is a legal action thriller and more. Ted lives in Brampton, Ontario with his wife, Sandra. They have two children. On June 17, Ted gave a reading of “Such Stuff as Dreams” at CJ’s Café. You can read a book review by Ted here.

Our next reading night at CJ’s is Monday, Sept 13. Join us there (2416 Lakeshore Rd W in Oakville) at 6:30 to hear some great pieces of writing.
For information about Brian Henry’s writing workshops and creative writing courses, see here.
Posted by Brian Henry at 9:03 AM