"The Wrath of Bob," an excerpt from a long narrative by Ken Vaughan 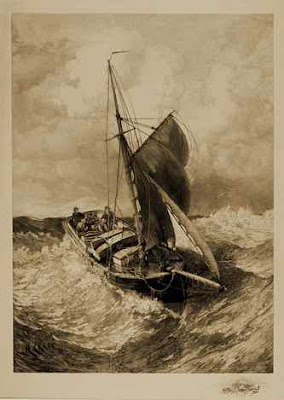 Bob’s eyes never left the fishing boat, but his mind wandered. He had tried to find a name more suitable to his position, but it appeared many of them were already used. Being the Devil had its drawbacks.

Recently he’d come across Jaacobah, a name from the Bible.  It meant deceiver, supplanter, and it seemed perfect. Bob had supplanted the previous devil and deceived the Vampire Anton into believing he was its victim; this new name would announce that to the world.

Back on the boat, the boy was now in action. His parents had tied him to a running rail, but he’d seen a rope that needed attention, and had run to help. Jaacobah couldn’t understand why; the boy had received little love from his father, quite the opposite. Contempt would be the kindest word for his father’s feelings.

Frank was a brute, pure and simple. He had virtually bought his wife Meg from her parents, though more threats were passed than money. It was not uncommon, the fishing village was poor, barely harvesting enough to live on, let alone sell. Frank was the top man in his trade; at least Meg wouldn’t starve. It was the best they could do.

Once married, Meg wasn’t much more than a slave. She cooked and cleaned, and Frank forced her to crew for him. She didn't know whether he was too cheap to pay for crew, or too suspicious to leave her alone while he worked. Either way, she actually enjoyed working the boat, though she would never tell him that. The learning had been horrific; Frank reinforced instructions with the back of his hand, and rewarded mistakes with his fist. It was extremely efficient, before long Meg worked the boat as well as he.

"Matthew, get back to the rail and tie yourself off!” Meg yelled, she didn’t need to be keeping an eye on him right now.

The storm had come from nowhere. The afternoon had been grey, but not unpleasant, they’d managed a fair catch and were headed home. The wind suddenly veered, coming from the North, it caught them by surprise nearly capsizing the boat. The waves swelled from a gentle two feet to a howling fifteen feet within seconds. Rain soaked their heavy coats before they could button them for protection.

Meg quickly lowered the small sail they used to save on gas, while Frank started the ancient inboard motor. Their best bet was to turn the boat into the wind and power forward trying to avoid side-swiping waves that could roll them to their deaths.

Watching Matthew as he tied himself off to the rail, Meg flashed him a re-assuring smile, if there was anything good from this marriage it was him. She loved him more than her life, and would die without question to save him from harm. She’d suffered many a beating on his behalf, shielding him from his father.

Jaacobah was pleased with his plan; he’d caused the storm of course. Frank’s soul he knew was his, he could feel his grip on it, tight and dry. However, he intended to take Meg’s soul as well, and he meant to use the boy to do it.

Matthew was everything to Meg though he was conceived in horrible circumstances. Frank had never tried to please Meg as a lover, it’s doubtful he would have known how. He just took his pleasure and walked away. There were occasions that were worse however, and Matthew’s conception was one of them.

Returning drunk from the tavern, he grabbed Meg as he walked through the door, ignoring her gestures toward his supper on the table. He literally threw her at the bed, which she hit hard, cracking a rib as she glanced off the bedpost. Frank didn’t notice or didn’t care. Pushing her down, there was no removal of clothes; he just ripped aside her underwear and proceeded. Meg felt as though she was being stabbed in the side again and again.

When he was done Frank downed his supper, not noticing Meg stagger to the back door to quietly throw up. Married or not it was simply rape, for which he would never be punished… in this life.

For nearly an hour Frank and Meg fought the storm; they were nearing exhaustion. Matthew realized the situation - he’d spent most of his life on this boat - he couldn’t just stay tied and watch his parents fight for life. He released his rope and ran towards the bow, not sure what he would do to help, but determined to try. The wave caught him clean, sweeping him off his feet.

Frank turned just in time to see the boy disappear. Without thinking, he tied off the wheel and was over the side in the water looking for the boy.

“What the Hell is he doing?” Frank screamed at himself. “The stupid fucking kid deserves to die!”

In the water barely seconds, Frank saw the boy in front of him. He felt like smacking him under with the back of his hand, but the boy was easy to reach and a good deck hand. He grabbed Matthew by his collar dragging him toward the boat. He caught the rope that Meg lowered, and held the boy high so she could reach him.

As Matthew’s feet disappeared onto the boat, Frank realized he couldn’t get back on board without help. He wasn’t sure it would come. His strength was failing and he could barely hold the rope let alone climb it. Meg’s face appeared above him, calm and cold, and as she leaned forward he could see the long handled ice axe in her hands.

Jaacobah felt his mouth twist into a grin though there was no joy in it.

Frank stared into Meg’s eyes; there was no emotion there. She raised the ice axe in both hands, holding it high above her head, and stared back at him, directly into his eyes; a thing she would never normally dare. Frank knew he was dead.

Slowly Meg let the handle of the axe slide through her hands; when she reached the blade she held it with one hand either side of the shaft, pushing the handle toward Frank. Together they managed to get him back on board.

Jaacobah screamed at the foolish woman, and pounded the boat with more fearsome waves. As one, Frank and Meg fought to survive.

Since his plan had failed, Jaacobah soon became bored; he let the storm fade, though he continued to watch the boat.

Meg prepared for a beating; it was very obvious what she had planned, and she knew that only the storm had prevented retribution until now. Frank walked towards her his face blank.

“I thought you were going to kill me!” he said gruffly

She looked at his face though not into his eyes.

“Then why didn’t you?” His voice was strangely calm.

“You saved the boy, I will always be grateful to you for that. Thank you.”

Frank was silent, he knew in his heart that she deserved the back of his hand, but there was something in the way she said thank you that touched him. He knew she was sincere. No-one had ever thanked him for anything, but then he’d never done anything worth a thank you. He didn’t recognize the feeling inside him. It was soft, but it wasn’t unpleasant. Then something very unexpected happened.

“Thank you Papa!” Matthew said quietly from his mother’s arms.

Again, the feeling, and before he could stop himself he reached out and touched the boy’s cheek. It was an awkward gesture, almost devoid of love, but it was an acknowledgment that the boy existed. Matthew’s face shone with a bright smile, maybe his father had forgiven him for whatever it was he’d done.

By now Jaacobah was screaming. Not only had the stupid woman ignored the opportunity he’d given her, but also Frank’s soul - that he had gripped so tightly - now felt slippery. He couldn’t describe it exactly but he felt it could slip away if he wasn’t careful.

“Another spectacular failure Bob?” came a voice from behind him.

“Don’t call me Bob!” he screamed, turning on Alberonwyn with death in his eyes.

“What then?” the dual voice asked.

“I have chosen to be called Jaacobah, the deceiver, the supplanter!” Bob replied in triumph.

Bob said nothing, but if he could have killed Alberonwyn with his eyes he would have. He turned and moved away, throwing one huge peel of thunder and a bolt of lightning that split the fishing boat’s mast in two.

“He still doesn’t get it does he?” said Bronwyn.

“No, he still hasn’t realized he’s playing our game. I hope he never does!”

On the boat Meg held Matthew, her precious boy, and gave thanks to God. She wasn’t to know that God had nothing to do with any of this. Frank glanced over his shoulder, and frowned seeing the two of them. He knew something had changed, but what? 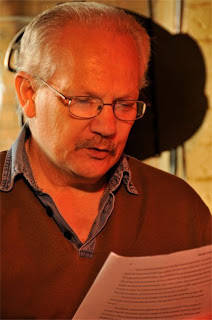 Ken Vaughan's life has divided into three sections. In the first section, small dog syndrome forced him to play rugby for thirteen years, join British Airborne Forces, compete in Gymnastics, Judo, Swimming, Show jumping, Ballroom dancing, and earn his Private Pilot's License. Then he wasted 21 years working for Bell Canada. After Bell, to stay employed, he learned every Windows product from PowerPoint to Visual Basic Programming and, to save money, taught himself auto-mechanics, plastering, tiling, plumbing, and carpentry.

He's not sure if he writes because he's insane or to prevent himself going insane. His two greatest achievements are raising two kids who don't hate him … yet and being married to the same woman for 36 years without her trying to kill him … yet. On June 17, he gave a reading of "The Wrath of Bob” at CJ’s Café.

Our next reading night at CJ’s is Monday, Sept 13. Join us there (2416 Lakeshore Rd W in Oakville) at 6:30 to hear some great pieces of writing!