"Do I Look Dead to You?" an excerpt from a novel by Kathy Milne 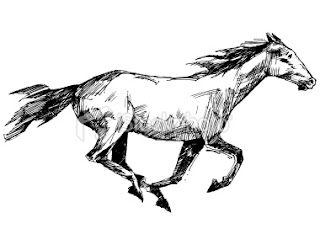 Chapter 4
Do I Look Dead to You?
an excerpt from Fire's First Breath
a young adult novel by Kathy Milne

Thudding hooves echoed in Ryan’s head while a never-ending blur of trees and hills and rocks and dirt flew by. He had no idea how long they’d been riding or where the horse was taking him, not that he had any choice in the matter. The stallion hadn’t slowed down at all, ignoring all of Ryan’s attempts to rein him in. Finally, he’d given up and just let himself flow into the stallion’s rhythm.

A horse length behind now, the strange boy clung desperately to the mare’s saddle, as if he’d never ridden a horse before in his life. Ryan wouldn’t have been surprised if he fell off.
He couldn’t believe what was happening. Like all boys, he’d dreamed of adventure, had wished for an escape from his boring life. But this wasn’t quite what he’d had in mind. Maybe that old saying –– be careful what you wish for –– was true after all.

Off to his right, menacing black clouds eclipsed the sun, which had already started its descent towards the horizon. Within minutes, sheets of water slanted down into their faces. It rained so hard Ryan could barely see the road in front of him and the stallion slowed to a walk. Rivers of white water swirled across the dirt road, turning it into a sea of mud. As his horse lurched off the trail, down onto a field, Ryan squinted ahead.

For an instant, he thought he’d seen a huge green umbrella, shimmering behind the curtain of rain. As they got closer, he saw it wasn’t an umbrella at all but a bunch of trees with enormous flat leaves. The water cascaded down, streaming onto the ground in circles around the trees.

Ryan ducked as the stallion passed under the edge of the tree, then slid to the ground with a groan. He glanced up into the tree, but not one drop made it through the huge leaves. At least they’d found somewhere to wait out the rain, Ryan thought with relief, as Revio rode up.

Revio’s tufted hair was in pointy spikes, making him look like a drowned porcupine. He untied a pack from the back of the saddle and dropped it to the ground, then climbed awkwardly off his horse. He brushed past Ryan as if he was invisible.

“Hey, wait a minute, you’ve got some explaining to do.” Ryan grabbed Revio’s arm and pulled him around. “Where am I? Is this some sort of hell dimension?”

Revio’s eyes were huge and glassy in the dim light. “We are in Northern Khaleiria, of course. Where else would we be?”

Ryan rolled his eyes. Ask a stupid question, get a stupid answer.

How could he explain his situation to Revio without sounding like a total whack job?

“Do I look dead to you?” Nothing like getting right to the point, Ryan thought.

Revio took a step back. His face eased slowly into a smile, the kind used for calming lunatics and drunks. “You do not appear to be dead,” he said finally.

“But I must be dead. Why else would I be here? I don’t know where I am or who you are and what were those creatures, I think they were going to eat us…” Ryan gulped in a breath. Did he sound hysterical?

“My friend is dead!” Revio yelled at him. “You look to be quite alive to me.” He pulled a blanket out of his pack, dropped his wet robe on the ground and wrapped himself in the blanket. Lying down, he closed his eyes.

“Oh, come on.” Ryan prodded Revio with his foot. “Your name’s Revio, right?”

Revio yanked the blanket up over his head and curled into a ball.

Seething with frustration, Ryan paced back and forth. The boy’s name was Rev-io? What kind of dumbass name was that? He felt like giving Revio a swift kick, throwing his stupid blanket out in the rain and forcing him to answer some questions. What did Revio expect him to do now –– talk to the horses? Ryan’s shoulders slumped. He had an awful feeling that this scared looking boy was his only lifeline.

While he paced, Ryan took the remaining packs off the horses, then loosened the mare’s saddle and tossed it to the ground. Had his father found out what had happened to him yet? What was he going to do? This was a total nightmare––

He stopped abruptly, almost tripping over his feet.

Of course! It was so obvious! The whole day was just a dream. He’d known all along this couldn’t be real. He would go to sleep – in his dream – and when he woke up he’d be home and everything would be back to normal.

Well, better than this anyway.

By now it was dark and Ryan fumbled with the stallion’s saddle. His hand bumped some sort of metal handle and he grasped it, pulling it free of the saddle. It was awfully heavy. He could hardly see a thing. Sliding his fingers along its edge, it felt like––

He yelped and dropped the sword on his foot. Hopping up and down, he sucked on his cut finger. The stallion and the sword must have belonged to the man who’d been fighting, he thought, the guy the creatures had ripped apart. With a shiver, he started to slide the sword back where he’d found it. On second thought, he felt better with a weapon in his hands, even though he’d probably stab himself. He thrust the sword point first into the earth then heaved the heavy saddle off the stallion’s back and propped it up against the trunk of the tree.

The rain had stopped, just dripping now and then from the trees. There was a flash of light and it wasn’t completely dark anymore. Grasping the sword, he peered out from under the tree then shrugged. It was only the light of the moons.

He stared. There were two moons, high in opposite corners of the sky, just peeking out of the clouds. One glowed a chilly silvery-blue; the other shone yellow, in a weak imitation of the sun. The moons slid out from behind the clouds, round and full, and in their combined light––

There was a girl.

She stood in the field between him and the road. She looked straight at him, but didn’t seem to see him there under the tree. He wanted to walk out to her, but he couldn’t move, he was stunned, the sword fell from his senseless fingers…

The moonlight painted her in shimmers of silver and gold. Narrow straps held up a flowing white dress, which clung to her, just skimming her bare ankles. Her hair was spun gold and her eyes glimmered like the depths of the sea, from the most astonishing face he’d ever seen. Sabrina the librarian was plain compared to this girl.

The rain poured down again and the girl laughed, raising her face to the sky. She spun around and around, hands held up to catch the rain, wet hair flying out like burnished ropes. Translucent drops flew off her, twinkling like tiny stars.

The girl turned towards him then a small frown puckered the middle of her forehead. She twirled and the light flashed oddly as the clouds extinguished the moonlight. The rain pelted into his eyes. Ryan jumped as a loud clap of thunder rolled right overhead.

Ryan dashed out from under the tree, not realizing he’d done it until he was completely drenched. A gust of hot wind slammed into him and he slipped uncontrollably in the mud. He rushed blindly forward, skidding to a stop on the spot where she’d been standing.

There was no one there.

He spun around, but he was alone. She’d been right there, he was sure of it, right in front of him, all light and magic and wonder. Exactly the girl he’d always dreamt of meeting.

Except he hadn’t actually met her.

All Ryan could hear was his own ragged breathing. He wrapped his arms around his chest as the rain ran in cold rivulets under his shirt and down his legs. He trudged back to the tree, the muck sucking his shoes off with each step. He was even more soaked now than he’d been before.

For the first time, he wasn’t so sure he wanted the day to end.

He dug around in one of the packs then yanked out a blanket. His pants were stuck to his legs, so he took them off, dropping them on the ground. The way his luck was going today, he’d turn around and the girl would be there again, giggling and pointing at his underwear. He got under the blanket and pulled the sword in beside him, the hilt clutched in one hand, and closed his eyes.

But no matter how hard he tried to concentrate on going home, all he could see was the girl, glistening gold and white in her dress and smiling at him with those eyes.

Kathy Milne has always been a voracious reader but it never occurred to her to write anything herself until she saw an article in the Oakville Beaver entitled “How to Get Published,” about a workshop being led by Brian Henry. It took 10 months (and several more notices in the paper) before she finally got up the nerve to attend one of Brian's Saturday classes. That was 6 years and several workshops and Intensive Writing courses ago. In the meanwhile, Kathy has completed the draft of a young adult novel called Fire’s First Breath. On June 17, she read this excerpt from her novel at CJ’s Café.

If you'd like to read to an audience, join us for our next reading night at CJ's on September 13.  Details here.  For information about Brian Henry's writng workshops and creative writing courses, see here.
Posted by Brian Henry at 11:53 AM