I admit to being proud of my kids, Leah and William. Could happen I even boast about them.

William is an actor and model, which is cool in itself and doubly cool when you consider that, at eight years old, he makes more money than I do.

William has never starred in a Hollywood film and I don’t expect him to. But every morning I can catch him on TV as the voice of Tiny Pig in the Wibbly Pig cartoon series. In the evening, when a Cracker Barrel commercial comes on, there’s William, handing a plate of cheese cut in a daisy shape to a little girl actor who’s almost as cute as he is. And junk mail comes with William posing next to tents from Canadian Tire and wearing clothes from Zellers. 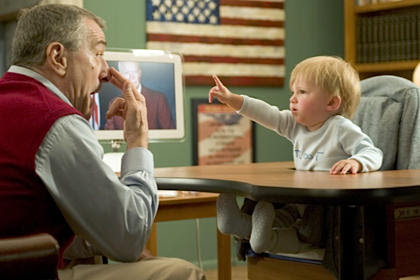 All of this is more than enough. We don’t dream of Hollywood – though his agent does. Once she even managed to land William an audition for a role in Little Fockers. He would have played opposite Robert DeNiro.

But guess what? He didn’t get the part.

We don’t dream of glamour, either. Not anymore. Turns out 95% of being an actor consists of driving about Toronto and waiting around to audition. At eight years old, William doesn’t drive. So he travels by family limo, and his manager pulls double-duty as his chauffeur and also as his mother and, on her evenings off, as my wife.

Last summer, we put a lot of kilometres on the family limo as William had auditions, call backs and jobs almost every day – often twice a day.

With Mom driving William around in Limo 1, it was up to me to chauffeur our daughter Leah in Limo 2. Unfortunately, Limo 2 is an ancient asthmatic Ford with expired air-conditioning and 400,000 kilometres on it. With temperatures soaring above 30 for weeks in a row, Leah and I sweated off the pounds as we drove to summer camp, swimming lessons – and the occasional audition. For Leah, too, is an actress and model, though not so successful.

Demographics conspire against her. The market demand for cute eight-year-old boys far exceeds the market for pretty twelve-year-old girls. Besides, like many second-born children, William has been hamming it up since birth.

Leah has determination, confidence and talent. But these amount to nothing beside a second-born’s biological imperative to command attention.

To date, Leah has gotten just one paying job, as an extra in an episode of the cop show Flashpoint, in which she plays one of a gaggle of panicked school children.

Leah doesn’t get a lot of auditions either and the ones she does get aren’t good.

This summer, the agency sent her to audition for a lead in a major new kids’ TV show – to be made by the same people who created Hannah Montana. Which sounds fabulous, except it was an open call. Anyone who could play a thirteen-year-old girl was welcome to audition. As it turned out, 900 adolescent girls thought they’d be perfect for the part.

The line up just to sign in snaked out the front door of the Latvian cultural centre, around the side of the building to the parking lot, then around the entire lot, back down the driveway and out onto the sidewalk.

We joined the line-up just after 9 a.m., pulled out our books and baked in the sun. Every few minutes, one of the early birds would exit and the line would shimmy over a couple steps to allow their car to pass. A few minutes later, the crew on traffic duty would allow a new vehicle into the parking lot and the line would shimmy to the side once more. Arriving at nine, we were far too late to grab a spot in the parking lot, but we’d found street parking for Limo 2 just six blocks away and hiked in.

At noon, we finally entered the air-conditioned bliss of the Cultural Centre and staggered up to the sign-in desk. There Leah presented her publicity shot and resume.

At 12 years old, Leah already has a long list of acting credits from school plays and community theatre, plus sundry items unrelated to acting: her job leading an after-school jewellery-making class, the book club she organized back in grade 2, her fund-raising for Sick Kids hospital, her bronze star in swimming and her first aid certificate.

A member of the sign-in crew glanced at her resume to check she’d listed her agent’s name, then invited us to find a seat. “You’ll have a bit of a wait,” he said.

No kidding. We were in a large auditorium filled with adolescent girls with a parent in tow, slumped in chairs scattered in a many-layered ring around the auditorium. The chairs were the kind you find in auditoriums everywhere – steel and plastic stackables without any pretence at comfort. But when I finally got to sit down, it felt like sinking into a LazyBoy. I could have used a nap.

“Sunburn,” I reassured her.

Fortunately, I’d packed us a good lunch and a variety of cold drinks, and pretty soon even I was feeling human again.

Off in a corner a bunch of girls had arranged an impromptu hopscotch game. Many more were practicing their audition script.

Beside us, a redhead with pigtails who might have just come from an Anne of Green Gables production was holding her script and projecting her huge voice at her mother, seated a foot away. “I can’t be-lieve it!”

“You want to practice?” I asked Leah.

She rolled her eyes.

“Want to join that hopscotch game?”

This didn’t even deserve an eye-roll. Apparently, the embarrassment factor of that suggestion was right off the scale.

I calculated how long it might be before we moved to the next stage of the line-up. Leah was number 539. Numbers 361 to 380 had just marched out of the auditorium, and the crew were rounding up numbers 381 to 400. Eighteen minutes later, that bunch marched out and the crew started marshalling the next twenty.

Complete panic lit up her eyes.

“Will Mommy get upset? How much is a ticket?”

Big sigh. “Thanks, Daddy.” A pause. “We could play hangman, if you’re bored.”

Two hours later numbers 521 to 540 were called, and we got into the final line, second from the end. A crew member led us out of the auditorium and into a hallway where we lined up outside a door. One by one, the girls disappeared into the room for their audition, then emerged from a second door a few paces farther down the hall.

Leah finally deigned to practice, mouthing the short script under her breath, tapping out the pace on her leg to make sure she didn’t gush it out too fast.

This line went swiftly. Soon we were right outside the door. Then the door opened and a young woman invited Leah in. I caught a glimpse inside – two guys with clipboards seated in office chairs, encouraging smiles still on their faces after all these many hours. God, they must be good.

And that was the last we heard about that audition.

Weeks later, we sat down as a family and watched the episode of Flashpoint in which Leah landed the bit as an extra. We got all excited when the scenes at the Science Centre started showing. Then there was the shot: a group of school girls moves across the screen from right to left.

We all applauded and Leah flushed with pride.

Since then, I’ve replayed that scene on the computer several times. I’ve yet to distinguish Leah from the crowd of girls around her. But I know she’s there. So does she. And I guess we’ve done an okay job of instilling confidence in her, because for Leah, just knowing she’s in that scene is as close to fame as she needs to get.

Brian Henry is a writer, editor and creative writing teacher in Toronto. This is his blog. William can currently be seen in a Tim Horton’s commercial and as the voice of Tiny Pig on the Wibbly Pig cartoon series. Leah continues to teach jewellery making and is now enrolled in a bronze medallion class. She plans to be an assistant swim instructor by the time she gets to high school. For further adventures with William, see here.


For information about Brian's writing workshops and creative writing classes, see here.
Posted by Brian Henry at 9:58 AM