A Mighty Heart: The Brave Life and Death of My Husband, Danny Pearl by Mariane Pearl, with Sarah Crighton, reviewed by Paula Darlington 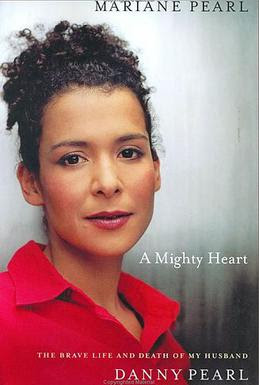 A Mighty Heart takes the reader back to the precarious days following 9/11 when we weren't quite sure who the enemy was but we knew this enemy was our new reality.

Daniel Pearl, a journalist for The Wall Street Journal, was kidnapped in Karachi, Pakistan, in the early days of 2002. In Mighty Heart, his wife, Marianne, recounts the months of waiting and the levels of ensuing confusion as authorities searched for the kidnappers.

The search is an intense, intricate process that engages local authorities, government agencies, journalists from Danny's newspaper, Marianne, and her friend Asra.  Marianne endures it while living in Asra's home in Karachi.

Marianne speaks of Daniel in such a descriptive way that he seems a character in the book, though his presence is minimal and restricted to the first chapter.  This man, the unfortunate victim of international terrorists, was extraordinary in his work and in his values.  But as Marianne endures this ordeal and speaks of Danny and the men who assist in searching for him, it becomes unclear who has the mighty heart: is it her or Daniel?

Marianne, a journalist too, is expecting their first child.  Her stalwart attitude that Danny will be found alive is the inspiration for all the men from various authorities who work tirelessly for months and months to get answers to who, what, how did this happen to Danny.

The why of it unfolds throughout the book.  Initially, Danny is kidnapped because of his outspoken articles about the situation in countries like Afghanistan and Pakistan. He believes that the more understanding he can transfer through journalism around the world, the better we can bridge our cultural differences.

But some differences can’t be bridged. Danny is Jewish. At one point in the book there is a movement to hide the names of Danny's parents in any media reports.  Why?  The names Ruth and Judea Pearl would announce their ancestry, further jeopardizing Danny.  And ultimately in the video his kidnappers made of his beheading, Danny was made to “confess” to being a Jew.

Though the book explores the terrorism of Al Queda, the vast reach of antisemitism, the multi-faceted turmoil of an international investigation, the heart of this book is the love between Marianne and Daniel, and the determination on her part to keep that love alive for their unborn child.  As the book teaches us about these pressing current issues it offers a parallel lesson on fortitude and survival.  A Mighty Heart explores beautifully the frustration and sadness of loss along with Marianne’s ability to retain, despite the intricate investigation, her love and relationship with Danny.

P.S. After you read the book, you might also check out the movie of Mighty Heart, starring Angelina Jolie.

Paula Darlington is married to Steve and mother of Kelly, Thomas and Jack and rescue dogs, Annie and Rory.  Reading, writing and books have been her passion since Dr. Seuss was introduced at a young age.  Living in the woods in Muskoka, working in a book store allows for a simpler lifestyle and the chance to enjoy books, knitting, and family.  Sharing her perceptions of The Mighty Heart was important to Paula because the events of 9/11 and its aftermath have affect us deeply in the present day.