Sixth-grader math wiz, Gregory, has a problem that nobody knows about, nobody that is, except his best friend, Matt.  Gregory used to have lots of fun, he used to do okay at school, too, but since the death of his father in a car crash, everything has gone wrong.
Gregory now has trouble concentrating.  He has trouble remembering things.  Trouble sleeping.  At school, he’s failing everything except math, which he loves.  In the world of numbers, Gregory finds solace and predictability.  He feels safe there, but this world, so perfect and orderly, is threatening to cut him off from real life.
Worst of all for Gregory now is the fact that he cannot walk past the spot where his dad died. It happened just down the street from where Gregory lives, right in front of the Jiffy Mart.  The problem is that in order to get to school the normal way, Gregory must walk past the Jiffy Mart.  But he can’t.  So now he walks the long way ‘round.
It was worth it, despite other obstacles this route held, including a big, terrifying dog.  But when circumstances ultimately force Gregory to visit the tragic location, he learns that with his love of numbers and the support of his friends, he can figure out a way to face his fears.

KIRKUS REVIEW
An absorbing middle-grade story of a boy trying to come to terms with his father’s death.  Terrell-Deutsch writes with simplicity and a compassion for her characters that will resonate with readers.  The promotion of math as fun stands out as an added bonus.  Insightful and sensitive, a solid character study. (Fiction 9-12) 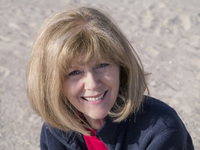 This is Beverley Terrell-Deutsch’s first novel.  She has a background as both an elementary school teacher and a school psychologist.  She has had short stories published in educational anthologies and is a two-time Judges’ Choice winner of the Toronto Star Newspaper Short Story Contest.