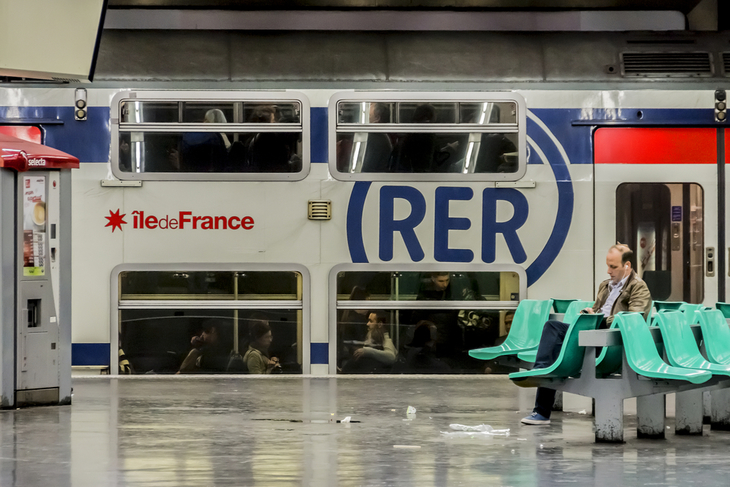 My belly was most content after the delectable seven-course lunch my cousin had served in the garden. White asparagus followed by a basil salad, then cold chicken and fresh pasta. Everything was light-tasting and perfectly proportioned.

Leaning back in a canvas lawn chair, I looked up at the dark green ivy climbing the front exterior of the stucco country home. Its leafy tendrils covered the second story, invading the corners of the windows and clinging with its suction cup toes to the forest green shutters. I would learn later that these shutters were closed in the evening, making them useful and not simply decorative.

I took a deep inhale of the lilac air and exhaled all my troubles and broken hearts in one emphatic sigh. If it was possible, I think I was purring.

This is why I came to Paris. This, and maybe to make you jealous.

My cousin Kelly gently slid another dish in front of me: crème fraiche and grilled peaches. Her children were laughing and running gleefully in the background. They were making a movie in the distant parts of the garden using a home video camera. Pirate hats and swords were involved. They planned to screen it for the adults later. I closed my eyes and had begun to dissolve into this idyllic French garden party when I remembered the horrendous journey I had endured to make it here. This moment of peace was my reward – my prize. I had earned this.

That same day I had flown from Montreal overnight. We had departed late in the evening, around 9 o’clock, were served an underwhelming meal immediately, followed by a glass of red wine, and then were aggressively nudged, by the non-subtle dimming of the cabin lights, to fall asleep. After a light two-hour nap, the rising sun and the smell of microwaved breakfast woke me. The world spins very fast on an airplane. 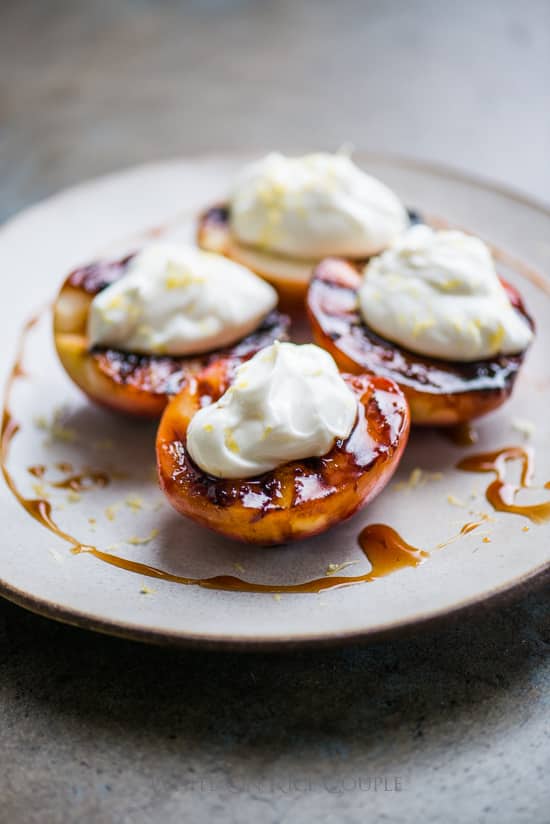 We touched down at Charles de Gaulle airport at 10 o’clock in the morning. I decided to take the RER into the center of the city. The RER is the train system that joins all major suburbs to the centre of Paris. You can travel into the “banlieue” or the wilderness surrounding the city, and one quick metro ride will bring you back to its heart in under an hour.

I transferred at Châtelet-Les Halles station to take another RER train out to the suburb of le Vésinet. This is where my cousin Kelly, her husband Michel, their three children, Sebastien, Hannah and Alix, and their fairy-tale garden were waiting for me.

And where I would be reminded of how much I miss you.

After my odyssey of planes, trains, and metros, I finally emerged from the underground at le Vésinet station. To exit, there was a large set of metal doors that opened and closed in a quick mechanical swinging motion. I watched as people placed a small ticket stub into the machine’s feeder, and again as that same ticket emerged on top of the machine, like a piece of toast popping up from a toaster.

I did NOT have this ticket stub. I had purchased one, but after using it to enter the station, I threw it away, assuming it had served its purpose. I assumed wrong. Who knew you would need it to exit the metro station? The French and their rules.

Something you said often to get a rise out of me.

I was now trapped, saddled with cement-heavy luggage, reeking of breakfast burrito and public transit, with no exit ticket, no attendant in sight, and no way out. I stood in panic for one full minute and then retraced a path in the map of my brain to a place I don’t often go. I was going to have to break the rules.

I engaged my radar for an accomplice and spotted a girl with tire-fire smoke black hair, facial piercings, and a black short-brimmed fedora. She was on the other side, so I motioned for her to come over.

“I speak English” she replied.

Was it that obvious I wasn’t from France? I’m Franco-Ontarienne, so I speak French fluently, but I guess it didn’t translate.

“I can’t get out. I didn’t keep my ticket thingy. I didn’t know I would need it to exit. Why wouldn’t they say that somewhere?”

She nodded, understanding half of what was said. She looked around to her left and then to her right. “Throw over your bags and then do the climb over.” 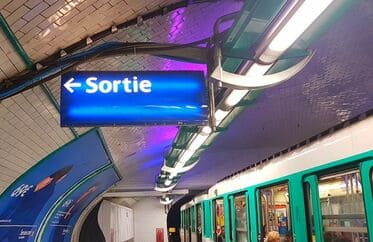 I was hesitant. What if I sent over my bags and she took off with six months worth of my stuff? I had a laptop, camera, and euros stuffed in various compartments in each bag. I like to spread things out in case one bag gets stolen. I also had euros taped to my body.

But this was a chance I needed to take in order to finally be extracted from this day-long, subterranean nightmare of a commute. My body was beginning to buckle under the weight of the day, and my twenty-pound backpack. All I wanted was a shower and a bed, and to get out of this crazy place!

I hoisted up my refrigerator-sized suitcase ungracefully, which she guided to the ground on the other side. She didn’t immediately run. I took that as a good sign. I then passed over my backpack. She was still there – excellent. I then shimmied myself up the shiny steel gate, whose doors were a good ten feet tall. I swung one leg over and sat straddling the gate, catching my breath.

This is when you’d be ready with a scorecard to judge my landing.

At that moment a stout French lady wearing a flowered dress and large pearl earrings approached the gate from the opposite side. She was entering the station I was attempting to flee. She looked up at me, furrowed her brow, pursed her lips, and clucked three times; the French equivalent of tsk tsk tsk, which they typically use to communicate their disdain and complete disapproval.

The young, metal-faced girl raised her hands in response to this lady as if to shoo her away like a bird. The lady scoffed and moved to another gate. My rebel friend then reached out her hand and swiftly helped me down. Freedom at last!

We exchanged a few seconds of devious smiles, then she said “smoke?” which surprised me, because I figured that was a strictly Canadian idiom.

We moved ourselves, and my family of luggage, out of the station and onto the platform outside. I pulled out a pack of cigarettes from one of the many compartments in my bag and offered her one.

“Gauloises? But these are French” she sniffed.

“Yeah, we have them in Canada too.”

“Only old men, and bad writers smoke these.” She laughed harshly.

“Well consider me the latter,” I snickered. She didn’t understand.

You would have been livid. You introduced me to Gauloises, after all.

I tried speaking in French again, but she continued to respond in English. When she was finished her cigarette, she pinched the cherry off, stubbed the end gently with her finger, and carried it over to the trash can. I thought this gesture was very sophisticated and thoughtful – just like I would learn the French can be. She turned, gave me a knowing nod, then disappeared from my life forever.

I wish you had been there to see it. 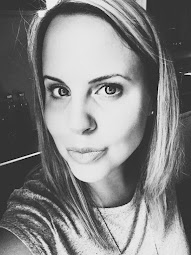 Melyssa Burke lives with her family in beautiful South Stormont, Ontario. When she is not writing in her favourite sunny spot, she spends most of her time reading, travelling, going for daily walks, attending live concerts, riding horses or advocating for the arts. Melyssa has been a contributing writer and photographer for York University’s Excalibur and CARFAC Ontario’s Dispatch.