“Under the Canopy” by Evelyn Rodinos

My first-year creative writing class came close to proving fatal. The twelve of us writer wanna-be’s, oozing self-importance from every pore, were tasked with writing a feature article for our final term project.

Most of my classmates quickly announced their inspired intentions. I could not help but reflect on their choices being a little self-evident or at least a little self-serving. There was the lost and resentful med school reject who decided on riding with an ambulance crew on a Saturday night to enhance his resume for a renewed application.

Then there was the fantasy night interviewing of exotic dancers; the natural choice for the class’s proudly puritan twenty-one-year-old virgin. Of course, the ultimate ‘brown-noser’ laid claim to shadowing our professor for a day to “illuminate the rigors” of academic life. And I made a mental note-to-self to never be alone with the brooding classmate who chose to bear witness to the evening shift in an abattoir.

But what could I write? Nothing spoke to me. Perhaps, I thought, I should go for self-improvement. Unfortunately, there were so many aspects of my life that could use some self-improvement that I was finding it difficult to focus on just one.

The choice was also complicated by the fact that I wanted to give this assignment a meaning beyond a grade. I was also seeking adventure. So the daunting task at hand was to write an article that involved adventure, meaning, self-improvement (without revealing too much) AND the receiving of an A grade. The gravitas involved in choosing my subject was almost paralyzing.

And then, mid-descent into the bowels of a subway station on an extremely steep escalator, an inspiration. My fear of heights! A fear I could admit publicly without too much shame or self-reveal. By the time I had reached the bottom level, I knew what I had to do. To complete the writing assignment, I would sign up for a course in skydiving.

Fortunately, (or unfortunately if your parachute does not open on cue), I made this decision at a time when the skydiving world was not well-regulated. A novice skydiving student could be trained for their first jump within hours over one weekend. Three hours on a Friday night casually practicing a landing roll by jumping off a desk onto a mat. Then a Saturday visit to the drop zone where we were introduced to what a parachute looked like, what the Cessna looked like, what our jumpsuit looked like and most importantly, what the safety chute looked like if the main chute would not open.

We were introduced to a new lexicon of ripcords and struts and toggles and air density and jump-timing protocols. On Sunday morning: our first jump. And this was not the tandem jumps of current day. No, back in the day as the old folks say, the first jumps were solo jumps, tethered to what I learned was called a “jump line”, but solo nonetheless. No desperate clinging to an experienced skydiver. Instead, at 3200 feet above  ground, we would be flung into the air … alone. Not for the faint of heart.

Now one would think that fact alone would create fear and trembling in this rather naïve, deathly afraid of heights novice. I was afraid and trembling all right but it had little to do with the jump. Instead, it was the heavy burden I felt to uphold the dignity of my sex that preoccupied me. I was the lone woman in a training octet of testosterone-octaned young men. The pressure to defy the objectified weak and timid female stereotype weighed heavily on me. I was determined to not show fear or, worse, back out of the first jump altogether which I was reminded happens about fifty percent of the time.

I endured my fellow trainees suggesting I be relegated to folding the parachutes into our backpacks (since I was obviously used to doing laundry) and kindly offering to find me a helmet that matched my eye colour. They laughed at my uncoordinated practiced landing rolls and offered other forms of “rolling lessons on softer surfaces.” 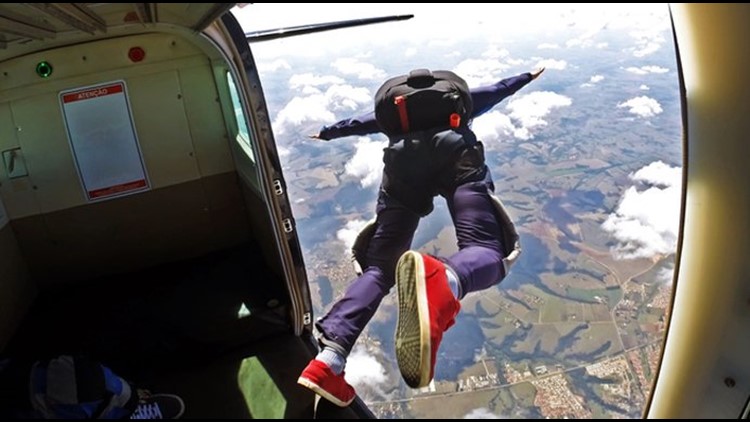 So never mind my trying to conquer my fear of heights, my seeking excitement. My mission was not only about me anymore. It had now morphed into a re-education programme for half our species, beginning with these seven tokens of male bravado and privilege.

And so that Sunday morning, armed with my new skills, my new attitude and my new cause, I climbed into the Cessna without a moment’s hesitation. I knelt where indicated, the place for the second designated jumper. I smugly noted that two of the more sexist trainees were AWOL. The plane’s engines sputtered into a loud drone and within minutes we were flying above the farms, the barns and the snow-packed fields. It was then I remembered only too well one of my many other areas for self-improvement: my severe motion-sickness.

As the plane continued its ascent into the sparse clouds, I began clawing my way over the first jumper to get to the open hatch. I needed fresh air and I needed it quickly. To vomit over my fellow jumpers at this point would be a humiliation from which I could never recover.

The instructor yelled at me to go back into position. Over the roar of the engine, I tried to explain that my eagerness to get to the door had nothing to do with wanting to experience the joy of free fall. But my words were lost in the cacophony. Luck intervened however when Jumper #1 gladly gave up his position.

I quickly clambered out of the airplane to stand on the wing strut as I had been instructed. The motivation was a different one of course. It was not so that I could get into jump position as much as my desperately needing to get some fresh air. Two birds with one stone yet again. 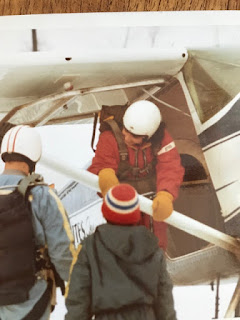 It was mid-February. The cold air being thicker would make for a slower descent for us novices – give us more time to open safety chutes if necessary. But no one had warned me about how biting and raw the air when standing on an airplane’s wing in mid-flight.

At least I was not vomiting. I could feel my life pulse pounding in my ears. It was a chaotic, surreal, impossible moment. And then the instructor’s tap on the leg: the signal to let go and fall. Don’t look down. Don’t think about it. Just let go.

I left all the angry dissonant engine noise and that bitter soulless wind. I left behind my fellow trainees and my need to re-educate. I left behind my instructor. Indeed, I left behind everything I was supposed to remember. Something about counting to ten. Right … if the main chute was not opened within the first 10 seconds, it meant trouble. But opening the safety too soon could easily result in it getting tangled with the main chute. Which would be like having no chute at all.

Such a delicate balance of timing, and I have never been good with details. I shouted, “Waa,” instead of the number one and could not form another sound. That “Waa” followed me down until, by some miracle called a jump line which attached my chute to the plane, my wonderful silk parachute opened, gently yanking me upright. I remembered then. It was called “opening shock”.

The stereotype is that skydiving trainees are traditionally seekers of adrenaline rushes, not silence. But in that moment, I came to understand what I had been seeking all along. It was not excitement or novelty, not even the self-imposed mission to further my sex. It was peace. It was the space I could only find alone, thousands of feet above the busy, hectic anthill of my day-to-day.

I became addicted to those moments under the canopy. I became a sky-diving instructor, using the hunger of those testosterone adrenaline junkies to not only pay my university tuition but, more importantly, to feed my addiction.

I had no more need to overcome my fears, or to seek excitement, or to even prove I was worthy of belonging. I had found my Zen, my truth, in the most unlikely of places: 3200 feet above sea level, under a silk canopy.

Evelyn Rodinos is a recently retired clinical psychologist living in Montreal. She is currently exploring creative writing in her third act.