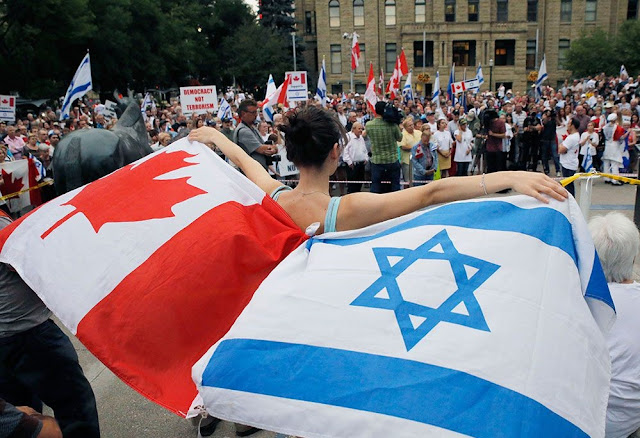 Under Jagmeet Singh, the NDP has positioned itself as hostile to Israel, and the thing that most concerns party activists is to defend antisemitism. Yes, there are still decent Dippers. Even a few short years ago, though, it would have been easy to name half a dozen NDP members of parliament who were genuine friends to Israel. Now as far as I can see, there’s just one: Randall Garrison, the NDP member for Esquimalt-Saanich-Sooke in BC.

Garrison is one of three Canadian MPs (plus one former MP) on the Inter-Parliamentary Task Force to Combat Online Antisemitism (see here). He’s the only member of the NDP caucus who refused to sign a pledge put out by a number of virulently anti-Israel organizations to sanction Israel when it was considering annexing parts of the West Bank in 2020. Within the NDP Garrison has been a consistent voice of sanity on the topic of Israel.

And within the NDP, sanity has become hard to find. Consider: at its April 2021 policy convention, the issue activists were most concerned about was to reject the International Holocaust Remembrance Association’s definition of antisemitism. The IHRA is an association of 34 countries, including Canada, that developed a definition of antisemitism which includes antisemitism’s modern manifestation as an obsessive hatred of Israel.

It’s the sort of antisemitism that attacks Israel as a racist, colonial, imperialist, genocidal, Nazi entity – as a state that should be wiped out. As for the Jews who live there and for Jews the world over who support Israel’s continuing existence, they’re seen as racist, Jewish-supremist, Nazis, with how de-humanized we are depending on how far down the antisemitic hole they’ve fallen.

Consider: at its policy convention, NDP activists brought forth, not one resolution, but three of them, sponsored by 42 different riding associations, all dedicated to rejecting the IHRA’s definition of antisemitism.

There were no resolutions at all about most of the gravest human rights abuses on the planet. Not a word about Syria, where half a million people have been butchered since the start of the Syrian Civil War and where arbitrary detentions, torture and enforced disappearances continue daily.

Not even a murmur about the two Canadians, Michael Spavor and Michael Kovrig, kidnapped by China.

No resolutions condemning Iran for its oppression of its own people, its support of terrorism and conflicts far beyond its borders, or even for shooting down a passenger jet and killing 85 Canadian citizens and permanent residents. The only resolution concerning Iran called for resuming diplomatic ties.

Also, party members from 17 different ridings sent a letter penned by Noah Tepperman, president of the Windsor-Tecumseh Federal NDP, to other NDP riding presidents, saying: “The NDP policy convention, where at least 99 per cent of attendees will not be Jewish, is neither the time nor the place to debate a resolution that condemns the definition of this pervasive hatred for the Jewish people.”

Or in other words, the NDP shouldn’t pretend to explain to Jews what antisemitism is – especially since the real problem Dippers have with the IHRA definition is that it labels their anti-Israel obsession for what it really is.

None of the resolutions against the IHRA definition came up for a vote at the convention. Party brass clearly decided it would be too embarrassing to allow an overwhelming vote in support of antisemitism. And most especially embarrassing to have this ugly obsession thrust in the face of the millions who vote for the NDP.

The resolution they did allow to come to a vote was the second most popular resolution at the convention: the one clearly placing the NDP on the Palestinian side of the conflict. The resolution called for a cessation of all arms sales to Israel and for the NDP to boycott Israeli products produced beyond the Green Line.

For the past 20 years, Boycott, Divestment and Sanctions has been the signature campaign of groups wanting to eradicate Israel. Never before has the NDP bought into this attempt to cut Israelis off from the rest of humanity. The resolution also accused Canada of violating international law because we have a free trade agreement with Israel.

It was backed by 36 riding associations and it passed with the support of 80% of the delegates, with 15% voting against.

What’s worse, since the convention, Jagmeet Singh has acted on the resolution. He’s called on the government to ban all arms sales to Israel, and the Federal NDP website has a petition for the public to sign calling for the same.

Consider: During its war against Israel this past May, Hamas fired 4,340 missiles into Israel, trying to murder as many innocent people as possible.

And the NDP wants Israel to be defenceless.

On its northern border, Israel faces Hezbollah, an even more formidable terrorist group, with ten times as many missiles – missiles that fly farther, with more accuracy and carry a deadlier payload.

Both Hamas and Hezbollah are funded and armed by Iran, which continually proclaims its desire to wipe Israel off the map and is developing nuclear weapons.

And the NDP wants Israel to be defenceless.

The only excuse anyone might give the NDP is that they have little chance of ever winning an election and, militarily, Canada carries no weight, so who cares what their foreign policy is.

But I do care. I care for myself and for Israeli friends. It is tough to be reviled, and to know that people are indifferent as to whether Jews live or die.

I have great admiration for Dippers trying to change the party from within, people like Kamila Graczyk a young convention delegate from Kanata-Carleton who spoke against the anti-Israel resolution at the convention. If I lived in Esquimalt-Saanich-Sooke, I might even vote for Randall Garrison. But otherwise, voting for the NDP is impossible.

It’s ironic. The NDP was once known as the conscience of the nation. Now, a vote for the NDP is unconscionable.

For a history of the IHRA definition and a defence against its detractors, see this brilliant interview with Dr. David Hirsh here.

Brian Henry is a writer, editor, creative writing instructor, and publisher of the Quick Brown Fox blog. He’s written opinion pieces for the National Post and The Toronto Star. He was also a regular contributor to the (now defunct) Jewish Tribune and the Engage and Harry’s Place websites in the UK. This piece was previously published on TheJ.ca, the Canadian Jewish community's online journal of news and opinion.
Posted by Brian Henry at 11:48 AM