"The Book of Negroes" by Lawrence Hill, reviewed by Tim Callighen 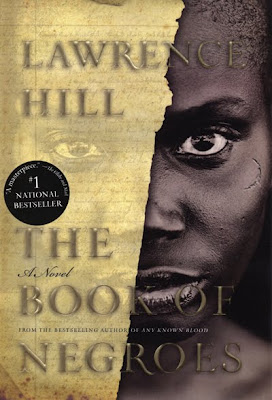 The Book of Negroes is first person narrative of a young woman kidnapped in Africa as a young girl who passes most of her life in slavery in America. She is a very old woman looking back on her life and telling/writing her story, ostensibly at the request of British anti-slavery workers around 1802.
It is an incredibly well researched book full of vivid detail and real stories. It also has the most balanced account of the history of slavery I have ever read. It is at times violent, revolting, disgusting, upsetting, horrifying and frightening. And the Western reader would usually, I think, say to themselves, “thank god we’ve come so far and this horror is banished from our world.” But it isn’t. It’s alive and well all over our world.
And that’s why this book is so important. Because without saying so, it asks for your condemnation of slavery, in all its forms. It has a point and it makes it. But subtly so. It didn’t hit me for several days, until I was reading about the war in the Congo. And after that, I saw it everywhere.
It is presented in a fictional format because this character is an amalgam of many others. Plot-wise, it is unrealistic that all the events could really happen to one person. But the events all did happen. And so the reader is carried away on the waves of a powerful story and disbelief is willingly, and happily, suspended.

The dialogue rings true. I felt truly a part of the story, like I was really there. When the slave owner talks to another white man in the slave’s presence, I am quite sure that they really did talk and think that way.

The main character, Aminata Diallo, is so real that I felt her looking over my shoulder, watching as I read. She was surprised that I didn’t know the detailed history of slavery in America and elsewhere. But she was resigned to reality and was content that things are improving, if only with glacial slowness.

The story is well paced. It lingers long enough on each stage of her journey through life to make you feel what she must have felt. It establishes events and timelines that ring true and, for me, answered questions just before I realized that I had them. The first person narrative stayed mostly in the past, but slipped into the present in a believable and never-confusing manner.

Except for people of overwhelming cruelty and greed, Aminata never condemns anyone. She understands them. She sympathizes with them, even as they do bad things. She forces herself to be rational where others get incensed or angry or carried away by their convictions. She is always the voice of the sane and the reasonable, even when those around her aren’t.

And so I think that there lies the message, or theme. Calm and rational behaviour is the way to overcome the evils of slavery (and maybe other societal evils?). Perseverance, over time, will take us to where we should be. A world without the horrors we do to each other or the animals we share existence with. Resist when you think you are right, fight only if you must against others whose aim is to hurt or enslave.

For information about Brian Henry's writing workshops and creative writing courses, see here.
Posted by Brian Henry at 7:13 AM