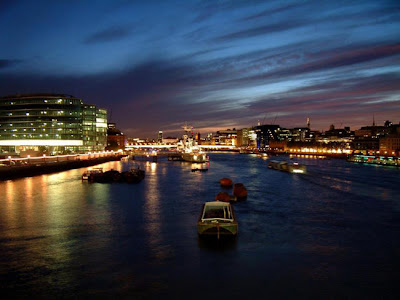 Tom Mitchell ran! Each breath left a cloud of mist in his wake. His heart pounded in his chest, spurred on by adrenaline overload.
Tom stole a look over his shoulder, never missing a step. The city street gleamed slick in the damp night. Echoing off derelict buildings, the sound of his feet slapping the pavement reverberated in the still air, and in his peripheral vision, moonlight flashed in the jagged shards of broken windows.
Tom ran faster, pushed himself harder until his lungs ached from exertion in the cold night air. A few yards away, the glistening ribbon of the River Thames snaked through London’s concrete maze. Inky black water sloshed against the quayside. The river loomed closer, city lights reflected on the black surface. From far in the distance, Tom heard a dog bark, sharp, agitated. His palms and forehead glistened with the clammy sheen of fear; he sensed his pursuers drawing near.
Tom glanced over his shoulder, turned toward the river and leaped over the thick chain. Closing his eyes he felt his body tense as every muscle and nerve prepared to hit the surface. When the water failed to envelop him in a frigid blanket, Tom opened his eyes. He was hovering, face down, six inches above the water, arms and legs outstretched. The smell of diesel, floating in rainbow swirls on the surface, filled his nostrils. Looking up, he saw four motionless figures on the quayside; Tom shivered, waiting, as their lips moved but no sound came forth, just faint smiles on their pale faces.

“Argh!” Tom sat up in bed, shaking his head wildly as his eyes took in the familiarity of his room. A draft from the open window blew the sheer curtains in a billowing cloak of net. His clothes lay abandoned across the floor.
“Jesus Christ! What the hell was all that about?” Tom cursed, collapsing onto one elbow to see that the digital green time on his radio-alarm read 3.45. “Shit, not again!” He reached behind the clock for his cigarettes.

“Damn!” he muttered. Crushing the empty packet with his fist he rolled from the bed onto the nylon carpet and groped around the floor for his discarded jeans.

Finally, with shaking hands, Tom pulled a second pack of Marlboro’s from his jeans’ pocket and sighed as he rammed a cigarette into his mouth.

“No more kebabs and bad coke at bedtime,” he told himself as he lit up with a silver Zippo. The tiny orange flame filled the room with shadows, and despite several deep drags, the inhaled chemicals did little to calm him. Tom crossed the room and closed the window.

For a few moments he stared out into the night. A neon sign buzzed on a building opposite, advertising Sonja’s Adult Entertainment, but other than a lone taxi delivering rowdy students home from the club district, the street was deserted.

Tom pulled on a grubby tee shirt and collapsed onto the bed. He switched on the lamp, banishing the shadows, and the room instantly became his seedy bedsit with monochromatic walls and a bile green carpet. As he blew smoke rings slowly into the air, he stared at the ceiling and thought about the dream. He’d had the same damn dream, three nights in a row. The same chase, same pale-faced pursuers, same inky-black river. Tonight had differed though: tonight he had jumped.

“It’s impossible” he said out loud, flicking ash from the Marlboro into an empty beer bottle beside the bed. “I floated in the air. I’d like to see a therapist work that one out!” He laughed; a dry, humourless sound that did little to ease his fear.

The two previous mornings of early waking had left him aware that further sleep would be unlikely. Knowing he had hours to fill before sunrise, he took a beer from the fridge and popped the cap into the sink. As he took a long swallow from the bottle of Pilsner, he had an idea.

“Maybe if I write it down, that’ll help make sense of it,” he whispered. He rooted in the kitchen drawer and finally found a pen that worked. With no paper in the house, he scribbled the details he could remember on the back of an old betting slip. With his terrifying ordeal now committed to words on paper, he still shook with fear.

“Only one thing to do then – get drunk!” An old mate Jerry frequented The Dog and Gun Pub; it’d been a while since he’d seen him but Jerry was a reliable boozer. Tom smiled. He’d get drunk with Jerry and share the crazy dream, maybe then he could forget it; just maybe.

The Dog and Gun Pub throbbed with the sound of drunken voices. Tom spotted his mate and sidled up to him at the bar, knocking back the remainder of his third pint. “Hey! Jerry! What’s happening?”

“Hey, Tom.” Jerry clapped Tom heavily on the back. “I haven’t seen you around for a while.”

“Well, you know how it is, Jer. I’ve been at her Majesty’s Service for the past six months.” Tom fiddled with an unlit cigarette and ordered another beer. “Damn no smoking laws. Whoever heard of a pub you can’t smoke in. The World’s gone fuckin’ crazy, Jer.”

“Yeah, tell me about it. Has it really been six months since I saw you?” Jerry’s eyes were wide. “Time sure passes when you’re having fun, don’t it? What you bin’ inside for?”

“Oh, this and that. I’ll tell you later, but have a pint with me. I’ve got something else I want to run by you.”

“So what’s all this about then?” Jerry asked, once they had their pints in hand.

“Let’s go outside so’s I can have a smoke, Jer.” Tom pushed a reluctant Jerry through the door toward the damp patio where other smokers inhaled and shivered; their faces showing alternating expressions of pleasure and pain.

“Just one mind, its bloody freezing out here.” Jerry wrapped his free arm across his chest. “What’s this so important thing you gotta tell me?”

“Jerry, what would you say if I told you someone was after me?”

“What would I say? I’d say they probably are, and that all that shit you mess with, is gonna finish you off one day.” Jerry laughed.

“No, Jer. Listen. There’re these blokes chasing me, but it’s in my dreams, not for real. Every night, last three nights – driving me crazy. I can’t get any fuckin’ peace.”

“Hah! Jerry snorted beer down his nose. “So you’re being haunted at night?” He laughed. “Who the hell do you think you are, bloody Ebenezer Scrooge?”

“Look, mate, I’m not messing. I’m scared.” Tom dragged deeply on his cigarette. “Last night like, some really weird thing happened and I saw myself floating over the river, you know, just hanging there like a bloody puppet on a string.”

“Tom, if you take them drugs, you gonna see all sorts of things. What did you have, a little smack, or was it coke?”

“No mate. I didn’t do any of that stuff.” Tom could feel his face flush and was glad of the darkness to hide his lie. “I think they might be ghosts or something that are after me.”

“Ghosts? After you? Tom, can you hear yourself? You’re talking like a madman.”

“Jerry no, I swear, something not right is happening to me. You gotta help me. Will you stay at my place tonight?”

“Stay in that doss house with you? You gotta be kidding.”

“Nice.” Tom frowned, “so when I’m gone and found drowned in the river, you remember we had this little talk, Jerry,”

“Oh so now you’re having premonitions about your own death? Jesus Tom, you’re really losing it. Look I’m going in for a game of darts. Wanna join me?”

“No. I’m off to get seriously drunk and then maybe I’ll sleep through the night.” Tom drained his pint. “Oh and as you asked, I was inside for mugging.”

“Oh, some old biddy who’d taken money out the bank machine. Wasn’t my finest hour. Turned out, she’d just heard that her son was killed in an accident with three of his mates. She ended up in hospital with a heart attack. Course, the papers jumped all over it and had me guilty before I had chance to defend myself.”

“Tom mate, you’re such a loser. If some guys do chase you, you better run fast. Oh, and thanks for the pint!”

Tom watched as Jerry walked into the pub. Drawing heavily on the cigarette, he went out the gate to the street.

“Some bloody mate,” he muttered as he stumbled along the pavement.

Suddenly, a movement ahead made him stop. Yellow pools of light dropped from the street lights while a white swirling mist bled from nowhere to coil around his legs.

“Shit!” he cried, and started to run. Four young men appeared before him, blocking his path. Tom stared at four pale faces, almost translucent, their gazes serene as he tried frantically to dodge them. He screamed in fear and lashed out with wild punches that failed to connect with anything solid. One figure stepped toward Tom, and he recognised him instantly as the old biddy’s son. God knows his photo had been in all the papers and on the TV. Tom wondered for a second if someone had made a mistake in reporting his death. The man smiled and nodded, and Tom watched mesmerized as the group parted. Seizing his chance to escape, he ran between them, down the deserted streets, heading for home.

Tom Mitchell ran! Legs lifted, muscles pumped. Each breath blew clouds of mist around his face, leaving a trail in his wake. His heart pounded in his chest, spurred on by adrenaline overload. Tom stole a look over his shoulder, never missing a step. The city street gleamed slick in the damp night.

His lungs ached from exertion in the cold air. On the quayside, he saw four young men watching in silence. Their skin shone luminescent, and as terror consumed him, rational thought fled his mind. Tom Mitchell leaped over the thick chain into the black frigid water of the River Thames. 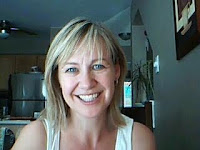 Sue Shipley has a decidedly schizophrenic style of writing. Torn between humour and “the dark side,” she is still wondering what genre she will adopt. Last year she published a personal essay on Quick Brown Fox entitled “The Spooky Art of Psychic Development” and hopes to eventually gain further writing credits. She read “Black River” at our reading night at CJ’s Café on December 8, 2009.
Posted by Brian Henry at 8:01 AM