"Gertrude and Claudius," by John Updike, reviewed by Maria Rainier 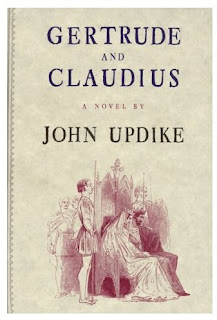 I was in a used book store looking for a copy of Ezra Pound’s The Cantos – one with a nice, beat-up spine and some character so that it would already look like I’d read it – when a clerk dumped several volumes in a pile in the corner (evidently part of their sorting system). Then he rushed back to the cash register.

At the very top of the pile was a significantly smaller book than the one I was looking for, but there were two names printed on its cover that appealed to my addiction to the classics and to medieval nerdiness: Gertrude and Claudius.

I never knew that John Updike had written any lengthier works than those in the collection of short stories I’d been forced to read in my junior year of high school, and also some series involving a rabbit or something. That he had taken a stab at the retelling of Hamlet from the perspective of his murderous uncle-turned-stepfather and his troubled mother was news to me.

I forgot to buy The Cantos.

As I read Updike’s forward to Gertrude and Claudius, I learned that he had taken into account the earlier Scandinavian legends of royal heirs feigning insanity to avenge a father’s murder. Updike also fleshes out the scenery and culture of the characters’ present – the gradual switch from paganism to Renaissance humanism and empiricism – that readers hungry for more than Shakespeare’s dialogue will appreciate.

The narrative is beautifully written. What is perhaps most delightful is that the reader forgets most, if not all, prejudices against Gertrude and even the murderous Claudius as a forbidden love blossoms years ahead of the tragedy where Shakespeare took up his tale.

The more one knows Hamlet and the innuendo and quips old William wrote between the lines, the more one is likely to enjoy Updike’s version. I remember my days in English Lit with Mrs. Johnson—most of my classmates failed to sympathize with the hesitant and brooding Hamlet, although I, being hesitant and somewhat brooding myself, always did.

In Updike’s hands, the sullen, loner prince who stands between Gertrude and Claudius in this novel has become something like the villain, and no Shakespeare play will be the same again.

Maria Rainier is a freelance writer and blog junkie from Indiana. She is currently a resident blogger at First in Education, researching various online programs and degree programs. In her spare time, she enjoys square-foot gardening, swimming, and avoiding her laptop.

For information about Brian Henry's writing workshops and creative writing courses, see here.
Posted by Brian Henry at 11:14 AM