"Without Words," a remembrance by Fred Cahoon 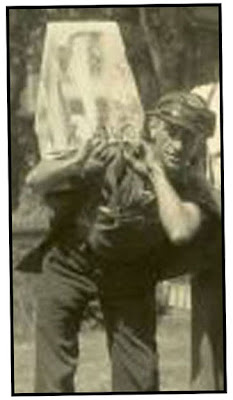 I was born when my dad was forty-five years old, a happy mistake, according to my mother. I remember her telling me, how proud my dad was the day I was born and how he had given out a truck-load of cigars. The truck-load metaphor was appropriate, since my dad owned his own ice and oil business and one of his trucks was always in our driveway at the end of each day.

Twenty-five years since he died and all I have to do to be near him is smell his old woolen sweater I’ve saved. His identifiable scent, a combination of El Producto cigar and fuel oil transports me back. I keep the sweater in a Time suit bag. My kids always seek it out and smell it whenever they come to visit. They loved their “Bamp” and didn’t need any words from him to know he loved them just as much.

It’s funny how the sense of smell can transport people back in time. One early spring day, the warm sun seemed to beckon me to dig a lawn chair out of the snow and sit outside on the deck, but not in two feet of the white stuff. I began shoveling at the deck’s edge; spearing and sliding off shovels full until I reached the wood decking. That’s when it hit me, the smell of wet wood.

Instantly I was ten or eleven and my dad was loading the ice truck on an early summer morning with me standing there groggily watching. I didn’t mind helping drag the hose on the oil truck, but even then it embarrassed me to “help” my father make his ice deliveries.

I don’t know exactly why I felt this way, but I did. Sure, I marveled how strong he was, easily able to maneuver the bluish white 300 lb blocks of ice with his ice tongs, sliding the blocks from the ice house storeroom out onto the loading platform and then onto the truck bed. He stacked them lengthwise in an orderly pattern, covering them with a heavy piece of canvas. As needed for deliveries, he cut the required size piece with his ice pick, which he kept in a sheath attached to his belt.

What I hated though, was seeing him stooped over under the weight of half a bar of ice on his back as he walked up the stairs of someone’s second or third floor apartment. Perhaps it was also because I had heard my mother say on more than one occasion, “Your dad should have been a professional person with an office instead of having to toil with his back.” Then she’d say, “Soon everyone will have an electric refrigerator and there won’t be any need for ice delivery.”

Although none of my friends ever teased me about my dad being an iceman, I think my mum’s words, combined with the vision of my dad bent under the weight of the ice, left me wishing neither he nor I had to be involved. And it all it took was the scent of wet wood – the same smell then and now – to transport me back to those memories and feelings.

My father never hugged me or told me he loved me. Come to think of it, the hardest thing I ever did was tell him I loved him. Stupid really, since we loved each other very much, far more than words could ever express. I never really thought of it as a child or felt the need for a verbal and physical confirmation of our affection for each other. I didn’t need to then; he was my father and our home was happy and secure. He never told me he loved me, but he showed me.

Often he’d arrive home with a ball or some small toy and only give it to me after his twinkling eyes or half smile let me know he had something. I remember the same smile when, after my mother had called me numerous times to come for supper and me offering a repeated, “Okay, mum, just a minute,” so I could make one final catch in the after-school ballgame out on the street, my father would come to the door, hold it open, and in a low, snarling, clipped voice, tell me to “Get in here now!”

I would run towards the front steps, jump to the third step from the bottom, and then dive under my dad’s half-hearted swiping spank as he held the storm door open. Once into the hallway, it would be a full out chase through the kitchen, into the dining room, into the living room and round again, with my dad placing chairs strategically to block my passage.

The game lasted until my mother would say, “Okay you guys, that’s enough. Sit down – your supper‘s getting cold!”

When I joined the Navy after high school, my parents drove me into the Naval Yard where I would shortly leave for Basic Training. As we said our goodbyes, my mother wept as we hugged. My father stuck out his calloused hand and said, “Do what they tell you.” It was the best he could say and I’ve never forgotten it.

There’s a picture of my father at Christmas; a profile shot of his head and face I took when I was in my thirties. He has his trademark stub of a cigar sticking out from under his nose with the smoke encircling his head. The crows-feet beside his right eye belie a half smile, almost as if he knew I would love this picture more and more as the years passed and, of course, I do.

When they left me at the naval yard, he and I shook hands and he pulled me toward him. No hug, but I got his meaning.

My father died at eighty-six, in hospital, on morphine following a recent lower leg amputation and was drifting in and out of consciousness. As I was about to leave, my wife told me to tell him I loved him, perhaps suspecting it might be the last time I saw him alive. Though I slightly resented being told, I knew it was the right thing to do. I said, “I love you, Dad.”

Somehow, it sounded shallow to my ear. He didn’t visibly react; maybe he didn’t hear me or maybe he still couldn’t say it back.

Though I know my father loved me, I never heard him tell me; something my son and daughter have never had to think about. Today is my father’s birthday; he’d have been one hundred twelve. I still celebrate quietly, without the words. 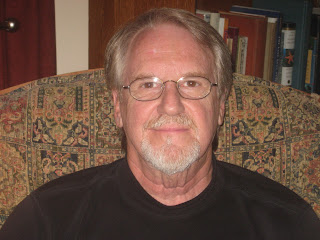 Fred Cahoon is a retired Microbiologist and lives with his wife on the Severn River. Blessed with a keen memory for the details of his youth and primarily written as a memoir for his son, daughter and grandchildren, Fred has compiled a collection of over a dozen short stories related to his boyhood years in New England. Fred is currently working on his first novel. Fred also feels passionate about the beauty of nature and the sea which has inspired him to write many poems using a variety of rhyming styles. Fall is his favorite season.