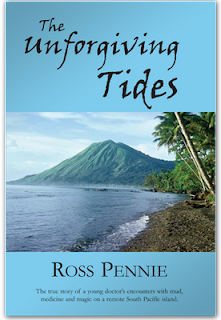 As promised, mud, medicine, and magic are delivered in this thoughtful, engaging, and entertaining account of Ross Pennie’s two-year stint as a young doctor on a remote South Pacific island.

Looking back more than twenty years, Pennie tells of his adventures volunteering, fresh out of medical school, at a clinic in Papua New Guinea. Each chapter tells the story of one event, usually a remarkable medical procedure the young Canadian doctor – “Dokta” in New Guinea Pidgin – performs on a desperate island resident.

Through these individual but intertwined tales, readers are treated not only to a gripping medical drama, but also to glimpses of the way of life in this remote place. The audience hears intriguing, realistic dialogue and witnesses the interactions of Pennie with his colleagues, mostly Roman Catholic nuns from around the world, with the locals that he treats, and with a group of international expatriates who gather for dinner and cards.﻿

﻿The mud is apparent in the shabby conditions Pennie lives in, complete with cockroaches in the kitchen and animals at his doorstep, and the even more scant living conditions of the local people, who often show up at the clinic filthy and malnourished.

The medicine is the reason that Pennie ends up in Papua New Guinea. The stories he reveals are his first experiences as a doctor, and readers undergo a trial by fire alongside the young physician as he employs innovative techniques out of desperation.

The magic is in the people he encounters and the impact they have on him, on his early experiences as a doctor, and on the rest of his career and life. More importantly, the magic he finds on the island, and even more so in retrospect as the tale dramatically comes full circle, is in knowing the difference that he made in the lives of those who called him Dokta.

Pennie’s story is a compelling read for those interested in medicine or remote parts of the world, and for all who appreciate touching stories of human interactions and triumph.

Jennifer Smith Gray is a graduate of the University of Waterloo's English - Rhetoric and Professional Writing program, and has extensive business and technical writing and editing experience. In recent years, she has been nurturing her inner creative writer, working on short stories, personal essays, and a memoir.

Born and raised in Northern Ontario, Jennifer transplanted herself to the big city 15 years ago and is inspired by all of the personal and professional writing-development opportunities in and around Toronto. When she's not putting pen to paper, Jennifer enjoys exploring her East York neighbourhood with her husband and kids.

Note: Ross Pennie has also published a mystery novel, Tainted; he has has a second mystery, Tampered, coming out in May, 2011; and a third mystery under contract.  Ross will be Brian Henry's guest speaker at upcoming "Writing Your Life & Other True Stories" workshops: on Sat, May 14 in Gravenhurst (details here), Sat, May 28 in Kitchener (details here), and Sat, June 11 in Hamilton (details here).