Excerpt from "The Receiving End of the Stick" by Sherian Groppini 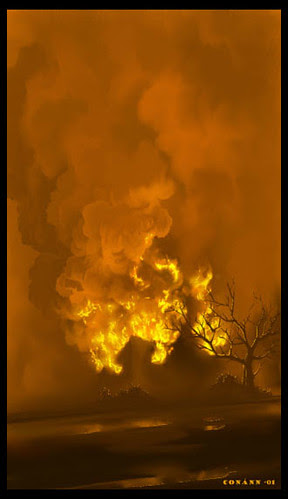 It took some time before I was really pulled under sleep’s spell. When I finally surrendered I quickly realized I was stuck in a familiar and frightening place.... I wanted out.

It was dark where I was crouched, but I did as I was told. The old lady with snow white long hair said I would be safe in there. She said I had to be as quiet as a mouse, take shallow breaths. Not a stretch, no one in their right mind would want to take deep breaths of that dusty, mouldy stench. She said to treat it as a game, like hide-and-seek except they were never allowed to find us. . .me.

From behind the plank wall in the one room cottage I felt the vibration of hooves padding against the ground, following the paws whipped into a beastly state, tearing up the earth, all tracking my scent. Their masters had been searching. It was only a matter of moments before the trail would end. But the old lady said I’d be safe, gave me her word.

I was too confused to be afraid. It wasn’t my fault. I didn’t know I was capable of such an act. I swat the bee away from my face. I was so angry, Victoria had been so mean. It landed on Victoria. And before so many witnesses, I wished her to die. . . and she did.

Inflicted by a single sting, she blew up, swollen till I thought she’d burst.

I didn’t even know I’d done it until the horrified voice of a woman shouted out from the crowd.

“A witch! The little one is a witch!”

I looked around and all eyes were peering at me, blue, green, hazel, brown, grey eyes filled with fear, bewilderment, anger, hatred, and all toward me.

“She cast a spell, conjuring a poisonous bee, killing my Victoria! Who will be next? Get her, before she puts a hex on us all!” Her mother cried and sobbed over Victoria’s limp, distorted shape.

Anger began to fill all the empty space, squeezing me out. I found it hard to breath. The crowd was descending upon me when the old women with long white hair emerged. A stranger, I’d never seen before. Standing protectively in front of me, she hissed wildly and spoke a language I’d never heard, turning slowly around covering me beneath her soft cloak.

The air around us became strangely still and eerie in its sudden silence, as if holding its breath, to listen to her incantation. With a start it was broken by a single boom of thunder. I was distracted by a harsh cry and looked up. A large black, shadow as big as a cloud with graceful, still wings glided in circles above us. The sky was crisp, blue, and clear.

In that moment I snuck a peak from under her cloak, to witness the hurried glances between the accusing eyes that fell upon me. I don’t know what they saw, but their expressions swiftly changed. They cried in fear and backed away from us. With a skeletal hand the old woman pointed and the crowd parted.

She gathered me up into her arms and the next thing I knew we were galloping through the forest. Trees flew by at a terrifying speed as we weaved our way threw the thick bush, plunging between trunks, leaping over dead logs, jutting roots and the rise and fall of the uneven terrain, forging our own path.

My ears rang with the sounds of thunder. I clung to her neck unable to do anything else, feeling the sting of thin branches whipping by, like flimsy fingers trying to grab at me. Her grip was hard, but protective as she cradled me close to her chest. Leather reigns poked out between her fingers, steering the horse with precision. She smelt fresh, like an ocean breeze. Not at all what I’d expected from someone of her age.

Her white cloak rimmed and lined with white fur bellowed behind her like a giant wing. It felt soft against my cheek. I closed my eyes. The blurry landscape was upsetting my tummy.

“It’s time, little one,” she whispered crouching next to me.

There was a gentleness to her voice, like my mother’s. “Remember our game,” she encouraged, touching my shoulder. “Stay put no matter what you hear, feel or see. As long as you do, you will be safe. I promise.”

Her voice was soft, but urgent. I wanted to believe her, but I was filled with so much dread, so much doubt. The hounds always found the ones who hid and then they burned. And as though anticipating my protest she clamped her hand over my mouth.

“Don’t worry little one, I will find you again.”

With her hands she cupped the top of my head and mumbled something. Painful energy shot through me with the heat and speed of a lightning bolt, pinning my feet to the floor. I watched as she creaked open the planks of wood we’d entered and closed it shut without so much as a comforting look back.

I listened to the swishing of her petticoat against the wood floor, her heels clipping, hurrying across the room, the sound of a chair scraping and the thump as she must have sat down.

My eyes were wet with fear. I didn’t like the dark, it had always frightened me. I heard a crackling before I smelt the familiar comforting scent of a fresh fire. What was she doing? Just sitting there watching a fire? Why?

Suddenly my attention was drawn to the men and women shouting to one another.

“Look! Smoke! In the cottage. The old woman and the child must be there.” Their rough loud voices vibrated with excitement.

Was this a trap, but why? Why not just let them take me before?. . . When she rescued me I didn’t have the luxury of questioning the bizarre behaviour of this stranger, but now I did, even if it seemed as though she’d just saved me from a cruel, unfair fate.

The door crashed open. The hollering and harsh voices grew louder. I could hear the horses more clearly. The walls shook and reverberated with the deep sound of the village Priest’s voice.

“My, my, Father Mikos, do come in,” the old woman replied with such calm authority,

I smiled. I could picture the short, plump, bald Father all red faced and sweaty pulling at his collar.

Suddenly there was a different smell in the dark room. Sweet---thick. . . I wrinkled my nose, flesh. . . human flesh was on fire.” Whose? I panicked.

There was more swishing, clicking, scraping of heavy boots. It sounded as if there were many people in the tiny one room cottage. Why didn’t anyone run, help, no one seemed to care. But I knew that smell, I’d watched them burn. My father said I had to. And now they wanted to burn me. More tears spilled over. . .

“You old fool,” Father Mikos sneered. “Do not address me as though we’ve met. What have you done with the child?”

The old woman let out a loud moan and a grunt. She must have been struck. There was a scuffle as something heavy was dragged across the floor.

The old woman shouted in disgust, “this. . .is not the chosen child, she’s human. I threw her into the hearth amidst the burning flames. Don’t you recognize that smell?” She took a deep breath.

Someone yelled “Oh Lord have mercy.”

I felt the bumps as if people were falling to the ground.

“Don’t cast your eyes upon me in judgement? I’ve merely done your dirty work for you.

“What have you done to my Millie?---She’s just a child”

“Momma” It was a voiceless scream. The old woman had fused my lips together and stolen my voice.

Momma wailed, her tone weighted with grief and then broke into a desperate sob.

Daddy shouted, “you did this to her. You cursed my little girl, turned her into a witch. How dare you kill her? You will burn for this.”

There was a hubbub of activity. The crowd cheered, worked into a frenzied emotional state, each feeding off each other’s righteousness.

Father Mikos commanded. “Torch this place, with the old Hag in it. The Devil’s at work here.”

It was too late. She had me paralyzed and silenced---completely alone. Purposely cut off from everything I knew and loved. It was futile to fight when no one could save me. Resignation set into my bones as I wept---silently---alone. . .

It didn’t take long for the dried wooden plank cottage to become engulfed in flames. Smoke filled the tiny dark room, wrapping its arms around me, stealing my breath.

I came awake with a choking gasp, jarred by a high pitch whistle. My frantic eyes unfocused. I blinked, swallowed several times. Nothing was recognizable. I tried to shove the sound away. It made me feel more confused. I sniffed the air for the rancid scent of fear and righteousness, of scorching human flesh and the burning cottage. The air smelt fine. Home. I wasn’t crouching on the ground.

An almost-hysterical laugh bubbled out when my eyes finally recognized it. I was cocooned under my blankets curled up in a ball hugging myself on the cold hardwood floor of my bedroom. Every muscle ridged. I was covered in frightened perspiration. My heart raced wildly. My face was wet and my hair was stuck to the back of my neck. I knew I’d been crying in my dreams again.

As chief chocolatier for Everything Chocolate, Sherian Groppini spends countless hours in the company kitchen, and while her hands are busy, her mind wanders into the fantasy world of her young adult novel in progress, The Receiving End of the Stick. In December, Sherian gave a reading of this excerpt at CJ's Cafe. Sherian lives in Oakville with her husband, two children, a poodle, rabbit and down to just one hamster, with all requests for reptiles still denied. 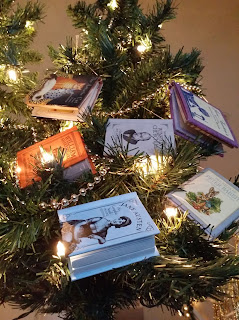