”Memories of My Mother’s Kitchen” by Cindy Robinson 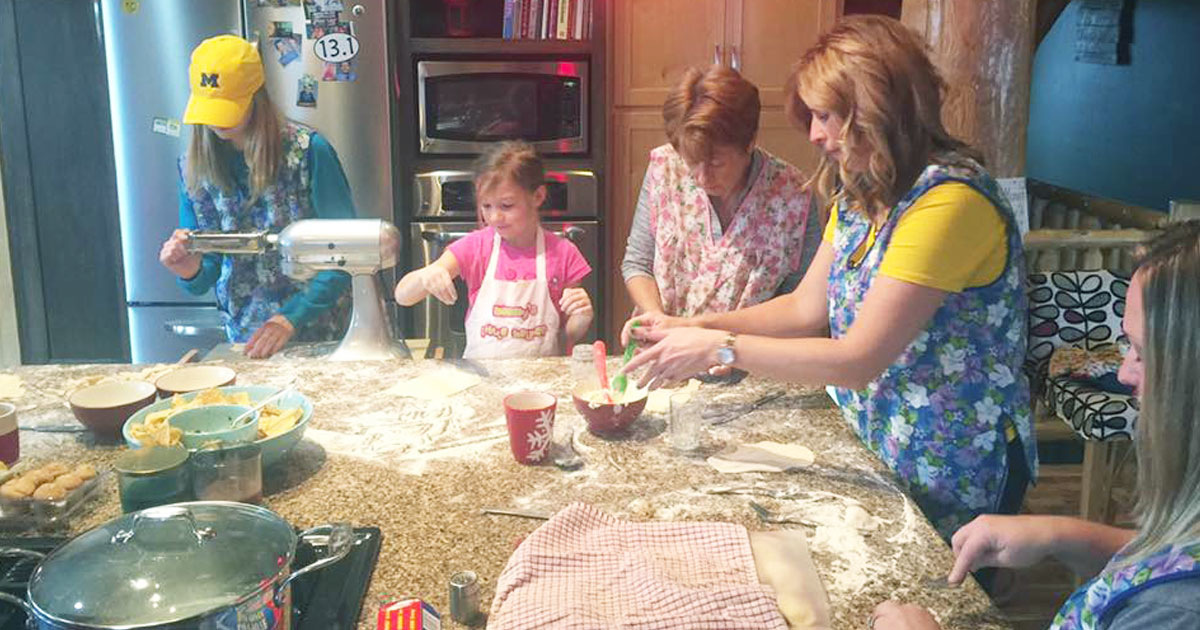 My mother certainly could have been a professional chef; everything she cooked, baked, fried, or assembled was delicious.  There was always something on the stove ready for anyone who might be hungry.  When I was dating Steve, my husband-to-be, he loved to come in after a night out because there would always be some leftovers or homemade soup for a late-night snack.
As I remember my mother’s kitchen, I think of the five senses.
I distinctly recall the smell of tart vinegar that was used to make dill pickles every year.  Mom would get baskets full of cucumbers, carefully arrange and squeeze them into big jars, add some garlic, dill, and pickling spices, then cover the whole thing with vinegar.  These large jars would be put in the basement and had to be turned upside down every week during the pickling process.  It was a long process, but, in the end, those pickles were tasty.  I also loved the pickled beets that she made.  My dad also got into the pickling process with his pickled eggs.  Pickled eggs were not a favourite food of my mom’s, so he was left on his own to make those.
When I think of the sense of sight in my mother’s kitchen, I’ll always remember the pink appliances.  The fridge was pink, the wall oven was pink, the cooktop was pink!  I think she even tried to find a pink toaster.  I guess it was a popular colour in the 60s and it went well with the turquoise countertops.
Who knows, those colours for a kitchen may come back in style some day. 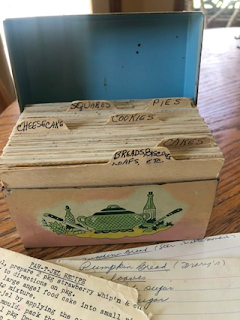 The sense of touch comes to mind as I remember being taught how to roll cabbage rolls.  The cabbage would need to be boiled to just the right tenderness, the thick part cut off, then just the right amount of filling put in.  The tricky part was the rolling.  The ends had to be tucked in after the first part of the roll. Then after the ends were tucked in, the rest would be rolled.
I remember how awkward it felt to get one right after a few times of rolling it. I would then look over and see that my mom had finished rolling six perfect cabbage rolls.  They were my favourite dinner, but now I have to confess that I have found a great recipe for a cabbage roll casserole which doesn’t include any rolling.
As I think of the sense of taste, I recall the delicious homemade soups - Mushroom Leek, French Onion, Chicken Noodle, and Borscht.  The secret to her great tasting soup was to leave it on the stove. There was always soup ready for you whenever you needed a snack, getting tastier by the minute.
Finally, my sense of hearing brings me to recall the many parties and celebrations that my mom hosted at our house.  We would laugh, we would sing, we would play music and we would dance.  This fun happened every year as we celebrated Christmas with the whole extended family at our house. Over 30 people would fill one half of the basement rec room.  The other half  had four long tables filled with everything you could imagine to eat. My mom would bake, cook and freeze everything at least two months ahead and did it all herself.
The salad table seemed endless.  There were bean salads, coleslaw, tuna macaroni salad, five-cup salad and jellied salads made in a variety of Tupperware molds.  My favourite of all fell into both the salad and dessert categories.  It was a Strawberry, Dream Whip and Angel food cake made in a Tupperware mold.   I enjoyed that salad so much that last year at a “Mad Men” New Year’s Eve party when the guests were to bring only food that would have been served in the 60s,  I brought that one and I still had the same Tupperware mold to make it in.  I might have been the only one who ate it that night, but it certainly was delicious.
I have a whole library of cookbooks, and sometimes I just like to sit and read the recipes and look at the pictures.  I still have three or four of the old recipe file boxes that my mom kept over the years, as she liked to read recipes, too. She'd copy them out on cards and write who or where she got the recipe from.  Often, I will recall a dish that we used to have and begin a search for that specific recipe in one of the old boxes.  Reading these recipes she wrote on handwritten cards brings back the memories of the sights, sounds, tastes, smells and touches of my mother’s kitchen.

Cindy Robinson lives in Hamilton, Ontario.  While being cooped up in her home she enjoys advancing her creative skills either in the kitchen whipping up meals for her family, painting landscapes, or writing stories.  She has many tales to tell from her long teaching career and raising three wonderful boys.  When not in isolation, she enjoys hiking and biking in the Bruce Peninsula and travelling to beautiful beaches.