What took so long to control the borders and why is your barista still not wearing a mask?


Update, April 20, 2020: Writing in the National Post, Chris Selley offers an explanation I hadn't imagined for why Public Health did so little to prevent or slow down Covid-19 coming to Canada:

Andrew House, who was chief of staff to Canada’s minister of public safety and emergency preparedness from 2010 to 2015, said he detected a “quietly Malthusian” streak among some officials in the department — i.e., “(the) strong will live; (the) weak will perish; (it’s) nature’s way.”

“As a result,” he said, “these experts do not believe in the doctrine of containment. At all. They do not believe in closing borders. Ever. … They advise ministers accordingly, without revealing underlying worldviews.”

Originally posted April 9, 2020:
Canada’s health authorities have done another U-turn. Since the start of the pandemic Canada's chief public health officer, Dr. Theresa Tam, has insisted that, unless you’re a health care worker, wearing a mask is a bad idea. Now, Dr. Tam has noticed that a mask might prevent people from spreading the virus.

This shouldn’t be a startling revelation. In Taiwan, for example, where they’ve had far more success controlling the virus, masks are standard wear for everybody. It’s not rocket science: wash your hands and avoid touching your face to protect yourself; wear a mask to protect others.

And still, the health authorities haven’t gone far enough. Across Canada, there are thousands of coffee shops, with thousands upon thousands of people working in them who each interact with hundreds of customers every day. Some of those people making your coffee – in Tims, Country Style, Starbucks – some of them have the corona virus. It’s a statistical certainty.

It takes five days to show symptoms, and 25% – 50% of people with the virus never do get symptoms or symptoms so mild they may not realize they have Covid-19, yet throughout the weeks they have the virus, they’re still contagious. And every single person they come in contact with – hundreds of customers a day – are in danger of catching the virus from them. The same goes for all the take-out restaurants. Pizza Pizza, anyone?

Wearing masks would not provide 100% protection – nothing does. But a simple mask does reduce the odds of any virus-laden droplet spraying from their mouth or nose to your coffee cup.

Masks should be mandatory for anyone whose work brings them into contact with many  people. The real question is, why aren’t they? Why have our health authorities been so slow on the uptake?

Surgical masks need to be reserved for health care workers, they say. True. But a homemade cloth mask is better than nothing.

The main argument has been that cloth masks don’t protect you from infection; they might even make you touch your face more, increasing your chance of catching the virus. Maybe, though cloth masks might provide some protection. They don’t have to be good enough to screen out the virus; just the droplets the virus is carried on. But really the argument is beside the point. The purpose of a mask is to protect others, not yourself.

How well do masks do this? No one really knows. And in truth, this seems to be the main sticking point for health authorities. Their guiding principle seems to be: Until we know for sure, do nothing. Which would be fine, except with a pandemic, a time-lag can kill people.

The last enormous U-turn was Canada closing its borders to international travel. Until basically the day before this happened our federal health minister Patty Hajdu was claiming that closing the borders would do more harm than good.

Her argument seemed to be that we had only two choices: a wide-open border or a completely sealed border, and that a sealed border would be a disaster. There was never any such dichotomy.

Even today "closing the border" means leaving it open to trade, to Canadians returning from abroad, and to essential personnel such as health care workers. Moreover, between the mostly closed border we have today and the wide-open border we had until March 17, there were many intermediary steps Canada could have taken and didn’t.

We could have instituted strong screening on international travellers – including travellers crossing from the U.S. We could have taken temperatures – checked for fevers. True, as our health authorities continue to point out, temperature checks aren’t full proof, but so what? Better to catch some people who haven’t reported symptoms than to let all of them in.

Even today, we still don't screen travellers effectively. According to the Globe and Mail, since March 13, 158 flights have come into Canada with confirmed cases of Covid-19 on board {here}.

We could have issued more travel advisories – and stronger advisories. For example, we knew there was uncontrolled community spread of the virus in the U.S. but did nothing for weeks. Yes, some people would have ignored advisories against visiting the U.S. But some would have paid attention. Quebec has the largest number of Covid-19 cases in Canada. Why? Because their spring break came before the U-turn, before the federal government finally started telling Canadians not to travel.

From a distance, it’s hard to guess what ails our senior health authorities.

Perhaps on the question of borders, they've been too wedded to the image of Canada as a team player, that we must follow the advice of the World Health Organization.

Unfortunately, the World Health Organization seems more interested in pandering to China than in  protecting world health. And China was strongly against the world closing its borders, particularly to flights from China because that would have hurt the Chinese economy.

Of course, now that China has its outbreak under control, it's reversed its stance and has closed itself off to flights from stricken countries. {Read more in the G&M here}.

Or perhaps our health authorities are too used to reacting when what’s needed is for them to figure out how to get out in front of the virus. Perhaps it’s a certain lack of imagination, a certain rigidity to their thinking, an unwillingness to consider that something might be less than 100% effective and 100% proven and still make a real contribution.

Or maybe we need more action from the ground up. Perhaps it's up to us to put on masks, to suggest to our local coffee shop {super-nicely!} that people preparing and serving food be masked, and to get on the phone to our MPP and suggest they make it a rule. Maybe we ought to suggest they also be checking temperatures of everyone who works with the public a couple times a day, like they do in Taiwan. Clearly, there are many more measures we could be taking, but our politicians may need a nudge; after all, they're pretty busy.

P.S. Ontario's Minister of Health, Christine Elliott – who I’ve met and is a real nice lady – can be reached at: christine.elliott@pc.ola.org 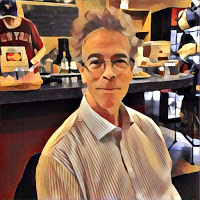