“A Kind of Magic” by Diane Dubas

The arts didn’t make sense to Emma. Of course, this was the key reason her therapist asked her to try one out.

“You need a creative outlet. To make you feel like you’ve accomplished something of meaning,” Dr. Melby said, spreading her hands wide as she talked.

Emma frowned at her laptop’s screen, watching her therapist drone on and on, her eyes always in the wrong place. Eye contact was difficult when you had to choose between staring at a cold and unfeeling camera, or tracking the other person’s face on the screen.

“I don’t know how to do any arts,” Emma replied. “I feel accomplished already.”

Dr. Melby sighed, her face deflating like a week-old helium balloon. Even though they weren’t in the same room, even though their eyes weren’t actually meeting, Emma recognized the pity there.

“If you felt accomplished, Emma, we wouldn’t be having this conversation.”

Emma had been thinking about that line ever since. Trying to determine if it was genuine, or if it was something Dr. Melby said to all the depressed teens staring back at her through the screen.

Emma was accomplished. She maintained her marks in school, in the face of adversity. She worked out daily, despite being stuck in her house. She’d applied for university and gotten into all three of her top choices. She was going places; she was accomplished.

And yet, she ordered the paint brush and watercolour set off Amazon, eagerly tracking the package until it made its way to her door. Her mom made her wait two days before opening the box and Emma stared at it, forlorn on the deck as a snowstorm rolled in and half-covered it. Idly she wondered if the paint could survive the cold.

To distract herself from the frozen package on the deck, she looked up YouTube tutorials and tried to find watercolour technique books from the online library. Emma always liked to be prepared when she undertook a new task. She liked to be ready.

She liked to know what she was doing.

Halfway through a dry paragraph on creating washes, her mind drifted back to the conversation she had with her therapist.

Dr. Melby shrugged. “I don’t know. Do you write? You could try creative writing? Or journaling…”

Then Dr. Melby winced, her words trailing off as she no doubt remembered when Emma tried gratitude journaling last year. It hadn’t gone well. In fact, it turned out that Emma had a knack for finding things not to be grateful for.

“All right, maybe not writing. What about music? Painting?”

Of course Dr. Melby had jumped on her interest, however faint. She’d nodded enthusiastically. “Yes! Painting! That’s a good thing to try, Emma. You’ll have to learn to let go, to let the magic happen.”

Emma frowned at the memory, just as she had at the comment at the time. Magic. Emma didn’t believe in magic.

When Emma was finally allowed to open her soggy, half-frozen box, fresh out of quarantine, she felt a bit giddy. She couldn’t remember feeling this kind of excitement, not for a long time. Maybe since she was a kid. Maybe since before the divorce.

It took her an hour to set everything up. To lay out her brushes neatly, to ensure she had enough water and paper towel. To tape her page down like she saw the YouTubers do. And then she sat down and…

There was no magic. No mystical painting trance had come over her. She just sat there, staring at the blank page, unsure where to start.

What was she supposed to paint? How did one … art?

She gave up, though it pained her to admit it. Emma wasn’t a quitter. Still, she left the blank page and her new paints on the kitchen table, in perpetuity.

“Have you tried painting yet?” Dr. Melby asked during their next session, her eyes somewhere to the left of where Emma actually was sitting.

It was like an out of body experience, that Dr. Melby was looking at her, but not.

“Why do you think that is?” Dr. Melby asked, looking away from screen-Emma, eager to make notes.

Emma frowned at the projected image of the crown of her therapist’s head, hunched over a page fifteen kilometers away in her office.

“I don’t feel connected,” Emma said, her voice floating out of her like it belonged to someone else.

Dr. Melby looked up again, not quite at her. “Why don’t we talk about that?”

Except Emma didn’t know how to talk about it.

The page was empty, the paint was new, and the brush was laughing at her. Not literally, of course. But it – an inanimate object – seemed to be so certain that she couldn’t do it. Emma didn’t say any of this because the last thing she needed was for Dr. Melby to lock her up more than the pandemic already had.

And maybe that was the problem. Maybe she didn’t need to be locked up. Maybe she needed to be set free.

“Emma, can I clean up your painting things? We’re having a Zoom dinner with grandma tomorrow and I need the table,” her mother called up the stairs.

“No, I’ll do it! Give me a minute,” she hollered back down. Tthe idea of someone else touching her painting things seemed suddenly abhorrent. Even though she couldn’t seem to do it herself.

She trundled down the stairs and paused in front of the table, her eyes falling on the empty page. All she had to do was the wet the paint and make one brush stroke. Then she could say she’d done it.

She filled up her jars of water and sat down at the table. She picked up that horrible, pristine brush and dipped the bristles into the water. Then she swiped the brush across the page. It was a messy, strange thing, the water pooling in low points on the paper. It was strangely satisfying, but it was only water. Water that she’d spread all over her paper.

On her next dip into the water, she hovered the wet brush over the bright, sunshine yellow paint and then she lowered it, wetting the paint and watching with fascination as the pigment wicked up into the bristles. Then, just like she’d seen in the tutorials, she pulled the paint across the page and watched the colour bleed through the water on the paper, spreading and growing in the most unpredictable patterns.

It was chaos, and not the organized kind.

She reached for another colour. Perhaps there was a kind of magic she could believe in after all. 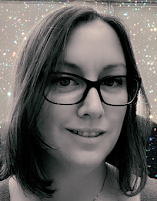 Diane Dubas is a speculative fiction author hailing from Ontario, Canada. Her work has appeared in numerous online and print publications, including AEscifi.ca’s Stargazers. Most recently, she placed first in the 2021 FanExpo Canada and Toronto International Festival of Authors flash fiction competition. She is a graduate of The Writer’s Studio at Simon Fraser University, and the Humber School for Writers. You can follow Diane on Twitter @dianasaurus9.