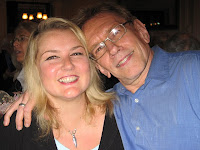 How would you like to be represented by the same literary agency that represented Franz Kafka and now represents Dan Brown?

SJGA was founded in 1932 by Sanford J. Greenburger, who specialized in representing European writers and publishers in the U.S., as well as internationally.  The agency built its prestigious reputation representing such icons as Kafka and Sartre.  Today, the agency represents dozens of New York Times bestsellers,  including Dan Brown, Nelson DeMille, and Robin Preiss Glasser.

SJ Greenburger Associates has nine agents on its roster.  The newest is Lisa Gallagher:

As an agent, Gallagher is looking to represent both fiction and non-fiction authors, and whilst she inevitably will be attracted to the same kinds of books she was passionate about as a publisher - accessible literary fiction, quality commercial women's fiction, suspense/thrillers, lively narrative non-fiction - she knows that sometimes it is a book that you don't know that you are looking for that becomes the one you can't put down.

Submissions: Drect your query to one of the nine agents at SJ Greenburger associates.  Submit your query letter in the body of the e-mail, and the following as Word attachments: the first three chapters of the manuscript (for fiction), a book proposal (for nonfiction), a synopsis of the work, and a brief bio or résumé.

Note:  In the spring, I'll be leading a number of "How to Get Published" workshops in Gravenhurst (April 17 - see here), Peterborough (Apirl 24), Kingston (April 25), and Hamilton (May 15).  Email me for details: brianhenry@sympatico.ca
For information about all my upcoming writing workshops and creative writing courses, see here.
Posted by Brian Henry at 10:11 PM