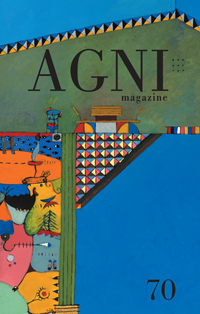 AGNI is one of the more prestigious literary journals in the United States, but you don’t have to be American or a world famous author to submit to them. Here’s what AGNI has to say for itself:

Literature for literature’s sake is not what AGNI is about. Rather, we see literature and the arts as part of a broad, ongoing cultural conversation that every society needs to remain vibrant and alive. What we print requires concentration and takes some time to digest, but it’s worth that time and effort: writers and artists hold a mirror up to nature, mankind, the world; they courageously reflect their age, for better or worse; and their best works provoke perceptions and thoughts that help us understand and respond to our age.

Aside from regular inclusion of its work in the annual Best American, O. Henry Prize, and Pushcart Prize anthologies, “[a]mong readers around the world, AGNI is known for publishing important new writers early in their careers,” as PEN American Center put it in 2001. Such authors include Jhumpa Lahiri (Pulitzer Prize, 2000, for Interpreter of Maladies; the title story appeared in AGNI 47 in 1998), Ha Jin (National Book Award, 1999; many of his early poems and stories appeared in AGNI and he was a Featured Poet in 1989), and Susanna Kaysen (Girl, Interrupted, first excerpted in AGNI in 1991), as well as Mark Doty, Glyn Maxwell, Sven Birkerts, and Olena Kalytiak Davis, whom we’ve printed alongside such luminaries as Seamus Heaney, Joyce Carol Oates, Derek Walcott, and many others.

AGNI welcomes unsolicited manuscripts between September 1st and May 31st only.
We do not consider previously published work, which includes work published on any website. AGNI’s reporting time is approximately 2 to 4 months.

Each submission may be accepted for publication in AGNI or (with the writer’s permission) AGNI Online. We buy first North American serial rights for the print magazine and first worldwide serial rights for the webmagazine. We pay $10 per printed (or printed-out) page for all accepted prose, $20 per page for poetry, $150 maximum, along with a year's subscription, and, for the print magazine, two contributor's copies and four gift copies of the issue.

Note: For information about Brian Henry's writing workshops and creative writing courses, see here.
Posted by Brian Henry at 8:31 AM