“Pieces of My Sisters Life” by Elizabeth Joy Arnold. Reviewed by Sherry Isaac 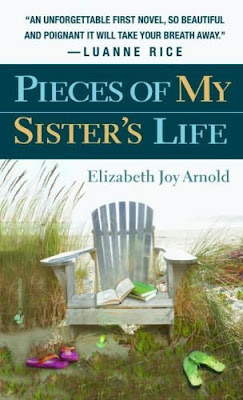 It was the front cover more than anything that drew my attention to the paperback novel – the white Muskoka chair, sans occupant, before a lonely beach. Then the title, another reminder of the book that stands out in my mind now as vividly as it did when I read it fifteen years ago, Summer Sisters by Judy Blume. And it was the adoration of this other book that had me picking up the new one, carrying it to the check out, taking it home and opening its pages in anticipation.

As a writer on the verge of publishing my first novel, I was eager to see how this New Jersey author had crafted her debut story. Elizabeth Joy Arnold did not disappoint. Her clear, cut-to-the-chase voice pulled me in; I was hooked before I reached the end of the first line.

Pieces of My Sisters Life explores the complex relationship between Eve and Kerry, twins so identical in appearance that years later Kerry cannot be certain which one is which as she looks upon a photograph taken during their childhood. Yet the girls, though close, are very different indeed.


Through flashbacks, Kerry reveals the intricacies not only of their unique bond but also of their mutual adoration for the boy next door as she comes to terms with the events that tore them apart the summer they turned seventeen. In the present, Kerry struggles to put the past behind her as she returns to Eve’s side and sees her through the final stages of cancer.

Ms. Arnold weaves together the threads of suspense, dread, anger, relief, regret, loyalty, heartbreak, joy and forgiveness in a tale both seamless and tender.


Sherry Isaac has published pieces in Quick Brown Fox, New Mystery Reader and Over My Dead Body. Her short story, The Forgetting, placed first in the Alice Munro Contest in 2009. She is also co-host of Prana Presents, a venue featuring the work of Toronto’s hottest new authors and poets. Visit Sherry on the web at http://www.sherryisaac.com/

Note: For information about Brian Henry's writing workshops and creative writing classes, see here.
Posted by Brian Henry at 9:02 AM