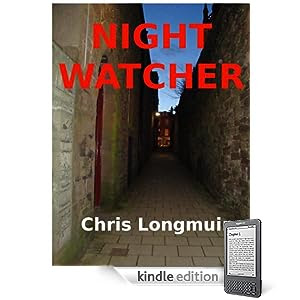 Julie Chalmers leaves her home in Edinburgh, Scotland, after a visit from the police telling her that her estranged husband was found dead in Dundee. Knowing that he left for another woman, she pulls up roots, reverts to her maiden name, and moves to the city where he died, planning on exacting her revenge on the other woman, a man-eater named Nicole.

Little does Julie know that the Night Watcher – a disturbed young man – has already arrived in Dundee and his Chosen One is Nicole, the other woman.

Julie rents the flat above the one her husband had in the building where he died and puts her plans of revenge on Nicole into action.

Over the years, Nicole has amassed a number of enemies - Harry, the security guard at the store who she belittles at every opportunity, Ken - her lover who she dumps when it becomes clear he’s not about to leave his wife, Scott - her husband who has his own bit on the side.

When Nicole thinks she’s being stalked and gifts mysteriously arrive for her – dead birds and animals – and just as mysteriously disappear, her husband doesn’t take her seriously. He tries to convince her that it’s her imagination. But does he have an ulterior motive?

When the police are called in, the head detective on the case doesn’t take Nicole’s accounts of recent events seriously. Only when she ends up dead does the detective realize he’s made a grave error.

Things get even more complicated when the detective falls for Julie and they embark on a relationship only to discover that Julie has become the Night Watcher’s next Chosen One.

Even when you think you have it all figured out, Chris throws in one final twist to throw you off. Her descriptive narrative draws you into the story, making the sights, sounds and smells of Dundee come to life. The dialogue is natural and makes the characters seem like normal folk you might meet on the street or in your local. For anyone who enjoys crime fiction, I highly recommend this as an addition to your must read list.

Chris’s first novel, Dead Wood, won the prestigious Dundee International Book prize in 2009. The first prize included £10,000 and publication by Polygon. You can visit her website here. The Kindle version of Night Watcher is available for download from amazon.com for $3.99 US here. Book trailer here.

Melanie King lives in Brockville, Ontario with her family. When not working or speaking, Melanie loves reading and writing, hoping one day to break into the novel-length fiction market.