“You can’t go to Paris,” her mother said. Both Nina’s parents were horrified at her plans. “You’re a child, only seventeen. How will you live? Who will you live with? What about money? You can’t work there.”

Finally her father cut in over her mother’s questions, “You’re going to live with that young man aren’t you? You know what they call kept women? You’re a slut!”

The pronouncement effectively ended that conversation. But at seventeen, Nina knew perfectly well that she was all grown up. She’d make her own decisions, find her own way. She knew she’d be just fine.

She flew to Orly and was met by the young man in question. The little studio apartment in the twelfth arrondisement was on the sixth floor of a six-floor walk-up. No shower. Actually not even a toilet. That was out on the landing – a hole in the floor with a porcelain footprint on either side to show where you were supposed to stand or squat.

She found employment as a shop girl in the shoe store around the corner – Mandrilly Chaussures. She learned to cook in the French style. The neighborhood had everything. Two bakeries, a butcher shop, a delicatessen, a produce market. The farmer’s market was at the corner twice a week. 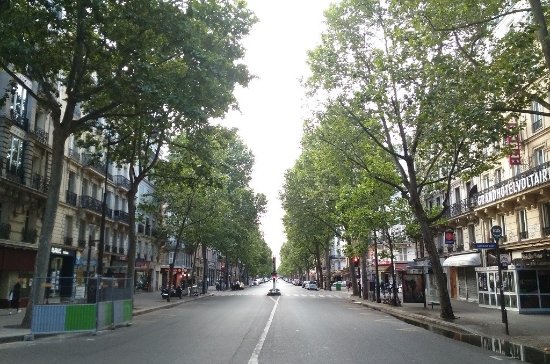 She walked everywhere, down boulevards lined with Plane trees.

The Metro stations had the loveliest iron grills, and if you first checked carefully, you could leap over the turnstile, board the subway train and travel anywhere in the city without paying a dime. Sometimes this was a grand adventure, other times simply scary.

And the young man? Francois worked for the post office. He rode the mail train from the Gare de Lyon, sorting mail as they went south and sorting the return mail on the return trip. Apparently it paid well. “What is it you do on the train, again?” she had to ask. It seemed so mindless to Nina.

“Pas grande chose,” he replied. He didn’t do much of anything and seemed extraordinarily pleased by this.

She was in her glory, especially when Francois was away on the trains. She explored every quarter of the city. She wrangled a student pass, pretending to be an international student at the Sorbonne. This opened the doors of the great museums – the Louvre, the Quai d’Orsay – for a very reasonable price. That same student pass got her into the Paris Opera.

Walking up the Champs Elysee, she watched the tourists, smugly thinking herself a native Parisienne. Sometimes they stopped her on the street, asking for directions. It was fun to pretend she didn’t understand English, couldn’t help them.

And so Nina settled into her routine. She worked at the shoe store five or six days a week, with a half day off Wednesdays and Sundays. Selling shoes to old ladies was easy. They were so taken with her cute foreign accent. She flattered them, but also ensured the shoes fit and flattered.

There was a rush to buy proper walking shoes in October. One of her favorite customers explained, “It’s for All Saints’ Day, of course. I need to be able to walk in the cemeteries.” Mystified, Nina pulled her coworker Christiane aside. “What on earth was Madame Cornier talking about? What is All Saints’ Day and what has it got to do with cemeteries?”

“It’s a national holiday,” Christiane explained. “November first. Many people go to visit their loved ones who have passed. They might visit three or four cemeteries in that single day, maybe more. It’s a sacred duty.”

Okay then. Quite a different tradition from the Canadian one. No trick-or-treating on October 31, just visiting dead people the following day, presumably without costumes or candy. By the end of October Nina was beginning to understand: this was a big occasion. And since it was a holiday, she too had the day off. The cemetery of Vincennes was nearby. Holiday or not, Francois was away on the mail train. So Nina took herself there, thinking herself better off alone. Francois was beginning to get on her nerves.

Cemeteries all over the world can be beautiful places, well treed with beautifully tended grounds. This one was old. Nina wandered up and down, studying the ancient gravestones. Here was one for a M. and Mme Mandrilly, presumably the ancestors of the shoe store owner. Here was one carved with angels. The name had worn off with time, only the dates remained: 1742 – 1782. Gravestone upon gravestone, the effect was one of peace. She picked up some small stones, placed one on a gravestone, put the rest in her pocket. They felt like a souvenir of peace.

Walking back to her apartment, Nina felt a presence nearby. Her mind began to fly. No, she thought, of course it’s not a ghost following me home. There’s no such thing. She walked on, feeling the presence behind. She looked back over her shoulder. Not a ghost. A flesh and blood man walking behind her. She walked faster. Her apartment building was just a street away when the man drew up. He reached out to grab her.

“Oh no you don’t!” Nina found the rest of the stones from the graveyard still in her pocket. She threw them in his face, screamed and ran. Safely back in the apartment, her heart still pounding, Nina felt her face wet with tears. She’d never felt threatened like that back home. She knew everyone in Blue Rocks. She wondered what her high school friends were doing. Certainly not fighting off Parisian creeps. 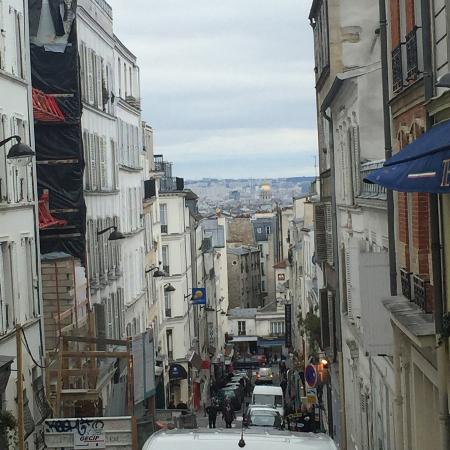 A letter arrived from her sister. Suzanne and her friend Lissi were coming to visit. They’d stay in a hotel but hoped Nina would be able to show them around. Suzanne was ten years older. What would she think of Nina’s life here?

Nina felt a curious mixture of pride and fear. She had always been the little sister, petted and yet judged. Her choices were never good enough, her rebellion always too much. But here in Paris, Nina would be the expert. She’d show them around. They would have a wonderful time. And so they did.

Two days before they were to leave, they all went out to a little Vietnamese restaurant on the Left Bank, the Quartier Latin. What crowds there were. Students and artists milling about, wandering the streets, arguing, debating. Even inside the restaurant. The dessert was especially decadent – flambéed bananas all around. All except for Suzanne who had chosen something else at random from the menu. While they were all enjoying the flambéed delight, Suzanne was presented with what looked like a large and very hard cookie. It resembled nothing so much as one of the stones from the graveyard.

Suzanne suddenly lost all vivacity. “Come home,” she said to Nina. “Come home. I miss you so much. I don’t want to lose my little sister. I love you.”

Suzanne’s words played over and over in Nina’s mind. Her sister, her family pulling from one side, Paris pulling from the other.

Fifty years later, Nina can’t remember much from that adventure. But here she found herself, sitting on the Blue Rocks of Nova Scotia, looking east. If I look far enough, I could see France, she thought. 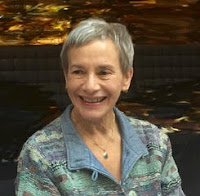 Lynda Sturgeoff is a retired Ph.D. chemist, has finally found the light. After years of reading, writing, and editing technical reports she is now taking her writing into the creative arena. This is aided and abetted by Brian Henry's writing class. She is currently working on a piece of creative nonfiction, thus combining the two solitudes.