The click, click of the knitting needles was the only sound I heard, the user unseen, a shapeless form buried in the shadows. “Would you like some light?” I asked and looked around for a candle or lantern.

Silence from the figure, only the movement of sharpened needles gleaming in the firelight, a tangle of yarn lay at its feet.

“Well...” I glanced around the room into which I found myself an intruder. The noise of the moors behind me. A plaintive wail of wind and percussive rain beat at the windows, seeking to gain entry. I, myself a lone traveller, stood there, still dripping from the storm.

When the door  swung open and I stepped inside, I'd expected a rough cottage, but nothing had prepared me for a sight such as this. Not a sweet tidy grandmum’s cozy home, but a crude shack; all manner of thorny implements hanging from the ceilings, blackened pots and sharpened tools hung together suspended from beams that looked like they were bones from some giant creature. Metal and wood jostled, clanging, as I brushed by. Heaps of garments lay strewn upon the floor, the odour of disuse filled the air, and as I drew breath, I was tempted to open a window against the stench of decay.

My host sat silent in the corner  occupied in her busywork – at least I supposed  her to be a her. by her side, murky flames leapt from a dank fire, eating  at the blackened stonework.

Still silence from the creature. In the leaping light of the fire, my host seemed to have heaps of clothes wrapped around her, a pile of garments that seemed to have no beginning or end. But the knitting needles protruded from the mass, clacking away and twining tangled threads, as though with a life of their own.

“Would you mind if I stayed, just for the night?” 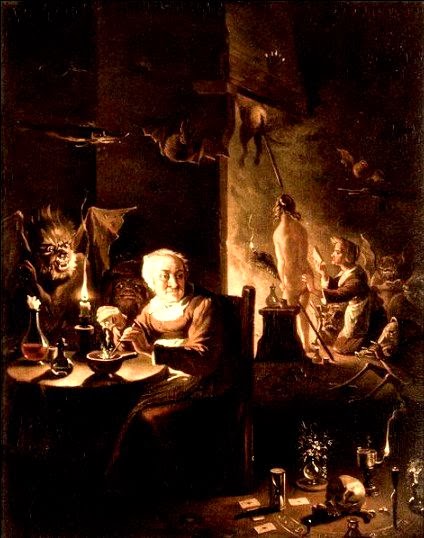 Silence from the creature, and I eased myself to the hard-dirt floor, my haversack beside me. Camping in the rough was to be expected on a journey such as mine, and I soon accustomed myself to the filthy floor.

“I would like to stay for the night, if I may,” I tried again. “I can pay you for your hospitality.” I jangled a purse full of coins, which the creature steadfastly ignored, so occupied she was with her knitting.

“What are you making?” I asked.

“You. Making,” the creature croaked, in a rusty voice full of disuse. I was so surprised by the fact of reply I nearly fell back on the floor.

“The storm? It will end soon?”

The creature fell back into silence; click, click of knitting needles the only sound heard above the storm outside.

I sat watching my host knitting, boney fingers barely distinguishable from the needles themselves, her face, as caught in the firelight, a grim mask of bone, with a thin skein of flesh stretched across. An old crone, I thought, gone mad and living alone in the wilds.

Realizing my host might need care herself, I sat up. “Can I offer you some food?” I opened my pack and began rifling through it . “I have some biscuits, perhaps –”

The figure seized me with a look so hideous that I broke off, suddenly unsure of my own intention.

Silence stretched between us as the storm continued outside, a weary call of all things left to the night. Rain spattered against the thatched roof, and a dampness crept in to my bones. I shifted my position on the floor, aching, and sought comfort in thinking about more pleasant times and situations of my own life. Familiar voices and faces filled my mind, and soon lost in thought, I was startled by the creature’s abrupt announcement. 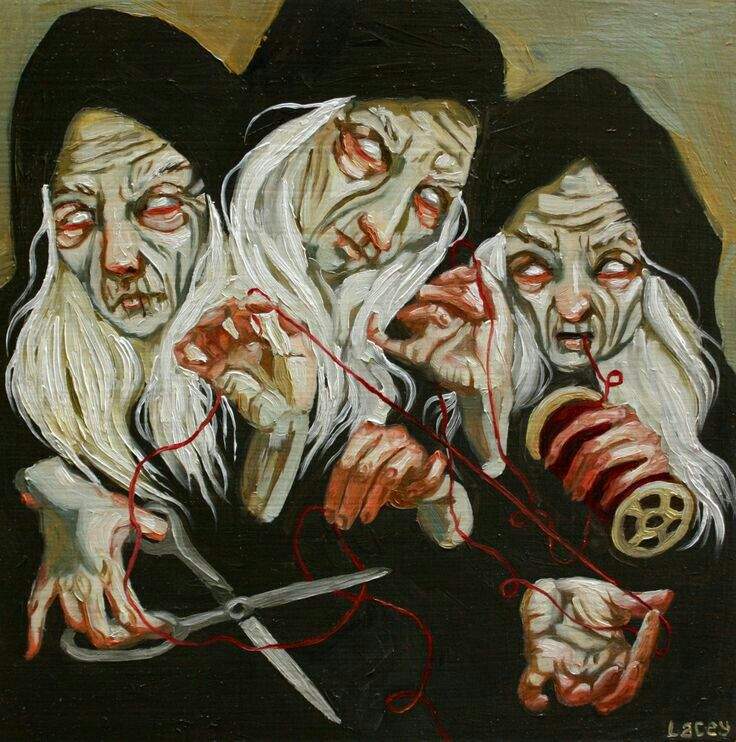 The figure gazed upon me, holding me with a look so terrible and filled with beauty that my knees trembled with fright. Then, plucking a pair of gleaming scissors from her person, she held out the tangled knitting in one hand and the scissors in the other, studying both by the firelight. I bade to scream, to shout out, to stop her, for in that instant I knew –

The figure held out a gnarled hand, and stopped me with a mere gesture.

Now, fully trembling with fright and realization, I watched as the figure cut the final line to the tattered piece of work, the thin thread falling lifeless, now on its own.

As though bound to the cloth itself, I too fell to the floor, gazing upward in the dim firelight at the work the figure now held admiringly. Flashes of my own life rushed before me: childhood, family, friendship, and beyond – all leading to my adventures here.

The piece fell to the floor beside me, and as I gasped my last breath, I perceived the creature pick up another skein of wool, and begin casting anew.

Liz McAdams is a short, sharp writer living in the wilds of Canada, with her black cats and her laptop. Her work appears in places such as Shotgun Honey, Yellow Mama, Near to the Knuckle and The Horror Zine. You can contact Liz through her blog here.