"The Waiting Game" by Jan Collis

It’s October 5, and today’s the day we’re supposed to find out. All day long I wait, checking every email ping. So far, none of them is The One, the email that will tell l me if my short story is one of the final three.
I play solitaire, answer emails, edit a story in the works, eat and watch CNN. I’m like the proverbial cat on a hot tin roof. This is how I imagine it must be for writers waiting to find out if their agent sealed a deal for their book. Nerve-wracking.
It all began in an afternoon writing class when Brian mentioned some contests for short stories. The 2018 John Kenneth Galbraith Literary Award was one of them.

I looked up the website. A prize of $2,000 (nothing to be sneezed at); not less then 3,000 words (I have one of those); $10 entry fee (I can handle that). On a whim and two days before deadline, I dropped my story into the mailbox with a great amount of trepidation because the story hadn’t been read or edited by anybody. Oh dear, I probably just wasted ten bucks and $2.85 postage.
A few weeks later I received an email announcing that Charley’s Bench was one of the twelve semi-finalists in Galbraith national competition. I was astounded – and sure the email was a hoax.
When I found out that it was for real, I was elated. Even though I’d sent various full-length manuscripts out to agents, I’d never had any feedback. I likened writing to fishing. You never knew when you’d get a bite. Now I had a bite – a big one. My story had a shot!
Ping. I eagerly open the email. The waiting is over. My story was not one of the final three.
I take a few minutes while Dejection washes over me, but then I step out of the River of Wait, shedding Anticipation as I would shed droplets of water and wrap myself in the damp blanket of Sadness. Once again, I wasn’t good enough.
But wait, an inner voice declares, you were good enough to be one of the semi-finalists. Your story just didn’t resonate with this year’s judges. And this isn’t the only contest; it was your first contest. Change your way of thinking, Jan. Making the semi-finalist group on your first try means your writing is good enough.
As my Dad used to say, “shoulders back, chin up, march on.”
But …  will the Waiting and Anticipation get any easier? I doubt it. 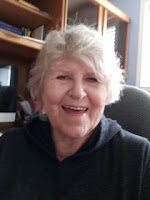 Jan Collis has attended most of Brian’s writing classes and workshops plus a script-writing course from Laurier University. Though she’s had three feature-length articles published in The Hamilton Magazine, her main focus is writing period fiction for adults and she’s been known to cross into picture books, middle grade fantasy and a psycho-thriller movie script. She’s currently working on a series of short stories, one of which was recently a semi-finalist for the 2018 John Kenneth Galbraith Literary Award.