“Stars of the Sea” by Robyn Thomas 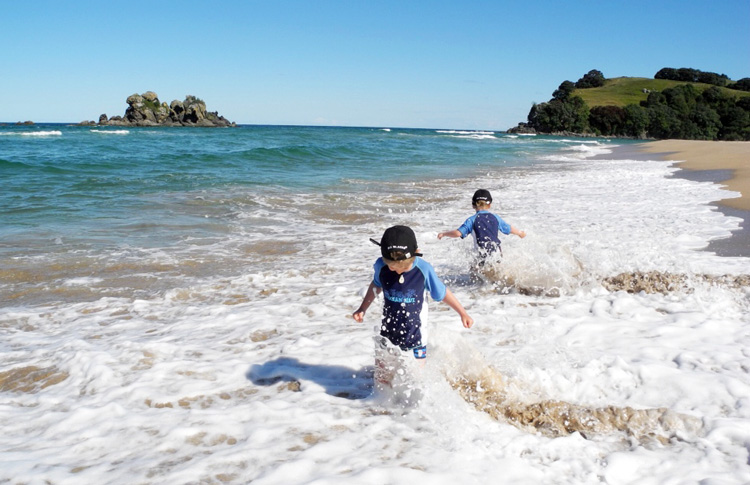 Beyond the screeching gulls and surfer boys riding breakers, an azure sky dipped into the deep green sea.

My brother rolled along the sand until he saw two starfish stranded by the tide. He ran soft fingers over the spiny orange back of the smallest starfish. The larger one was comet-shaped with two long arms and three stumps. Simon was as fascinated by the stars of the sea as I was by the stars in the sky.

“Alice, did you know that starfish grow a new arm if one falls off?” He dusted sand from its pink underbelly. “Can we grow new arms?”

He carried the starfish in cupped hands to the edge of a rock pool. “They need water or they’ll die.”

Simon released them into the pool. We squatted to watch. They sank to the bottom. We both held our breath. Soon the comet starfish shuttled on its two good arms to the shadowy refuge of a rock.

Bums wet, we waited, willing the little one to move. Simon nudged it, stirred the sand with his fingers but it lay still on a bed of broken pipi shells. Sticking our faces close to the water, we peered in. Death peered back.

Simon shuddered then, a long shudder not unlike the aftershock of an eye-jiggling, tooth-rattling earthquake. Before I could say a word he ran to Mum who lolled on a picnic blanket. She reminded me of the film star Grace Kelly, her blonde hair blowing around her face as she flipped through pages of the ‘New Zealand Women’s weekly.’ Putting the magazine aside, Mum folded her long brown legs and drew Simon onto her lap.

“You’re freezing love.” She wrapped him in a thick towel. “Let’s warm you up before you go for a swim, eh?” Simon huddled in her arms. The wind ruffled his hair, scattered sand across his feet.

“Stay between the flags,” Mum warned when we headed for the water. The red flags alerted us to tidal rips and other dangers hidden below the surface.

Salt spray stung our lips, our cheeks. Simon slid sleek as a dolphin under the waves. He was a strong swimmer for a seven-year-old. Floating on the swell, I cast my thoughts adrift.

Katie and Em squealed as they helped Dad net whitebait near a tumble of driftwood where a stream ran into the ocean. It was early November and the tender tiddlers were plentiful. Whitebait fritters were a spring delicacy at our house. I always shut my eyes before I ate the first mouthful. I didn’t want to see those googly eyes staring at me when I bit off their heads.

“Shark, shark!” Cries rang out along the beach.

Sirens wailed at the Lifesaving Club. Raising my head to see what the fuss was about, I noticed a grey dorsal fin near the periphery of the shallows not too far from my brother and me. Aargh. “Simon, Simon!” But he didn’t hear me and dove beneath the surface. Oblivious to the danger, Simon was a beacon for the shark. His thrashing arms and legs had caught its attention. The shark’s dorsal fin changed direction.

Lunging at Simon, I grabbed him by the swim trunks. “Let go of me,” he wriggled away.

“Shark!” I screamed making another grab at him.

“Liar, liar.” He splashed water in my face and slid underwater.

Waves rose and fell in bursts of white foam. I lost sight of my brother. Time stood still. I became the watcher, distant and invisible as a star in daylight. Then, Simon surfaced. “Boo!”

I yanked him to me, held him tight. Sensing my fear, he turned his head, saw the dorsal fin. He froze. Neck-deep in the sea and terrified to look back, I tugged my brother toward shore until a breaker bowled us over. Tumbling like a seashell, Simon slipped from my grasp. 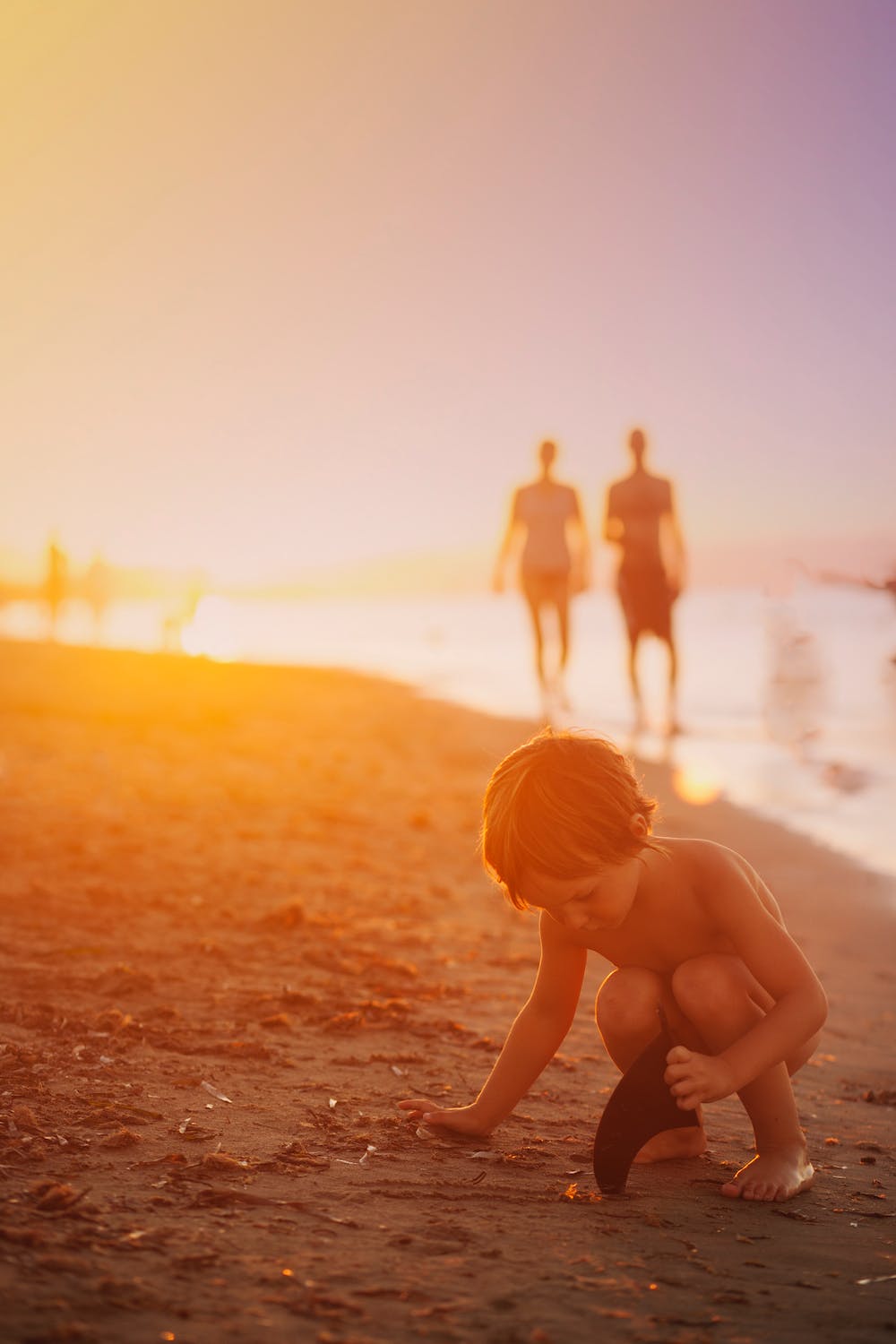 Familiar hands pulled me upright as I spat saltwater and sand. Mum had already hoisted Simon onto her back. He clung to her while she propelled us to safety past lifeguards and parents plucking howling kids, from the water.

Within minutes the sea emptied. Toes dug into the sand, everyone lined the beach. “That was a close call.”

Mum hugged Simon and me. “You’re a brave girl, Alice.” I felt her heart thud as hard as mine. But Mum was wrong. I wasn’t brave.

I was afraid, so afraid Simon might have been eaten by the shark, I could taste it.

Speculation rippled thru’ the crowd. “Mako,” said a surfer boy, a cool boy.

“Nah bro, it’s just a school shark. Been a few sightings near Papamoa,” his curly-haired friend said. Curly winked at me, jostled his mate. I blushed.

Taking its time, the creature circled the empty shallows then pointed its snout seaward and swam out of the bay.

In the distance, dark clouds bumped across the sky. Lightning flashed. I felt the air crackle.

“There’s a storm brewing.” Mum squinted at the disappearing sun. “Alice run and get your father and the twins. It’s time to head home.”

That night when we climbed into our beds, I said to Simon, “I’m sorry about the starfish.”

“It’s all right, Alice. At least we saved one. Grandpa Jim says everything dies. But I wish it wasn’t true. He says a big fish will eat the little starfish and a bigger fish will eat that fish. Grandpa will catch the biggest one of all and it’ll end up as fish ’n chips for dinner.” Simon yawned. “What if something big and scary like that shark eats me?” 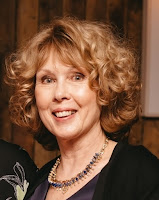 Robyn Thomas lives in a forest in Ontario’s beautiful Haliburton Highlands. Family, wildlife and a deep appreciation for her natural surroundings, born of her “kiwi” beginnings, offer daily inspiration that informs Robyn’s writing, story-telling, mediumship and photography. "Stars of the Sea" is an excerpt from her novel in progress.